Survey: Consumers’ Willingness to Give Up Personal Data is Waning

In the past, surveys have shown that people are willing to provide their personal data in exchange for personalized experiences, but new research from the Advertising Research Foundation (ARF) shows that this willingness is changing. What’s going on?

Put on the brakes! In the past, surveys have shown that people are willing to provide their personal data in exchange for personalized experiences. However, new research from the Advertising Research Foundation (ARF) shows that this willingness is changing.

This data comes from “2nd Annual Privacy Study,” a survey of 1,100 US Internet users by the ARF and reported by eMarketer. 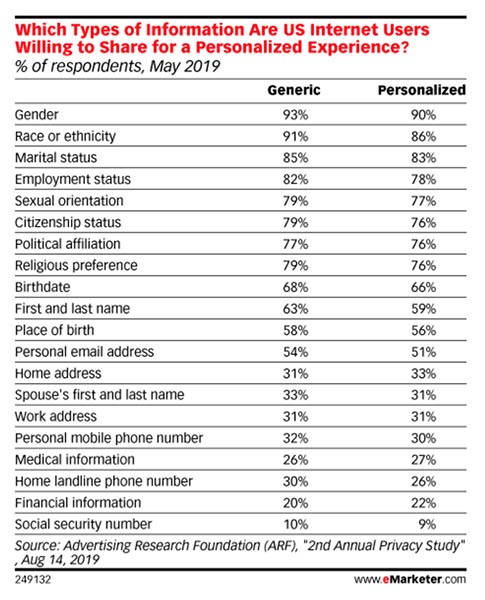 This is not to say that respondents’ lackluster for exchanging personal data for personalized experiences is particularly large. The differential ranged from 1% to 5%.

eMarketer reported that the willingness to make this exchange is also waning. The survey also found that, overall, people were slightly less likely to share their data in 2019 than they were one year ago.

Furthermore, when respondents were asked which institutions they trusted, there was a slight drop, as well:

To what can we account the change? According to eMarketer, it is consumers’ growing skepticism that they are actually getting anything in exchange for their data. In other words, they provided data in the past and, apparently, didn’t get enough value to make them feel that the compromising of their privacy was worth it.

This tells me that while brands may be collecting more data than ever, they aren’t making good use of it. Concern about invasion of privacy and data breaches is growing. If marketers are going to continue to get consumers to provide them with personal data, the perceived benefits of giving up that data have to grow, too—at minimum, enough to override the growing privacy concerns. Clearly, brands have some work to do.