Does Being a “Marketing Services Provider” Make a Difference? In 2013 it Did, but Not for Everyone

Many printers have started promoting themselves as “marketing service providers” (MSPs), almost to the point that the terms “printer” and MSP are synonymous.

Many printers have started promoting themselves as “marketing service providers” (MSPs), almost to the point that the terms “printer” and MSP are synonymous. The industry used to make fun of itself by saying all printers are alike because they all had the same equipment and same sales pitches. There is always the danger that all printers calling themselves MSPs are alike, too. There is no marketing differentiation if everyone does the same things and sells the same ways. Before you know it, you'll hear complaints that there is overcapacity in the marketing service provider business.

Past surveys have shown little difference in business performance between MSPs and non-MSPs. Four years ago, MSPs actually performed worse than average. At that time, it was easy to claim to be an MSP, as easy as printing new business cards.

That seems to have changed. About 60% of commercial printers claim to be MSPs. Many of the “pretender” MSPs have either gone out of business or have mended their ways.

The business performance of MSPs appears to be better than those that are not. The difference is not stark. There was a difference in 2013. Being an MSP was not a guarantee of business success. There were many non-MSP printers that had very good years. 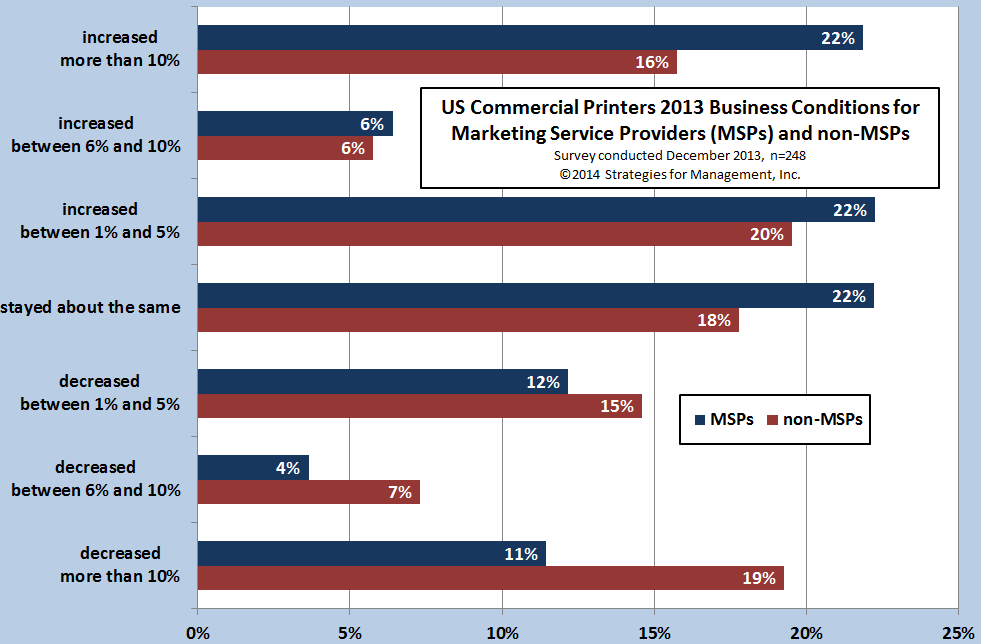 The survey of US commercial printers conducted in December 2013 provides some insight.

Of those that stated business increased more than 10%, MSPs were at 22% and non-MSPs were at 16%, meaning that MSPs were more than 35% more likely (calculated as 22%/16%) than non-MSPs to be in that category. Decreases in business were found in 27% of MSPs overall, with 15% stating that business fell 6% or more. They were about 35% less likely to report business contractions of any amount.

The survey did not explore detail about the nature of the differences, but our analysis of other data over the years, and conversations with successful MSPs, lead us to offer these characteristics of current successful ones. They:

That is, the MSPs are much better adapting their businesses to new business conditions, and they have a better sense than their competitors as to “why” clients print rather than “what” clients print.

This is not to say that MSP strategies are the only kinds that can result in better than average performance. Well-run traditional print businesses also exist without an MSP emphasis, as the data also indicate.

One of our concerns is that MSP owners consider their strategic transition from printing to their MSP platform to be something that has a beginning and an end. Communications markets are about to go through more significant transitions that may make 2008 and 2009 look tame. Stay ahead of your customers, now more than ever.