[S] I feel ya, sidewalk. I feel ya. pic.twitter.com/KK8DINEeYX

Light up your wardrobe! Coats and Osram have partnered to launch Coats Signal Active Illumination, a state-of-the-art washable, lightweight and customizable LED light system designed for application in garments and accessories. Visibility range is approximately three times more than retro-reflective products are able to achieve, according to Coats.

Are you running for political office and can’t decide what to wear? M.M.Lafleur can help! M.M.LaFleur launched “Ready to Run” this week, a program that will lend clothing—at no cost—to women running for any level of public office.

A Montreal-area boy who wanted a Toronto Maple Leaf cake for his 8th birthday ends up with a meat company logo instead due to a baker's Google search mistake. https://t.co/bNeRX5odVL

The Great Edit Menu in the Sky

PS, I Love You

Who Tells Your Story?

Every family is chock full of stories. Stories of history, stories of memory, stories of accomplishment and stories of love. From a grandparent’s tales of life decades ago to a couple’s first meeting to amazing life experiences and moments that you wish could be preserved for future generations.

Or, in some cases, the story of Ottmar Mergenthaler’s invention of the Linotype. For those that want to preserve their family lore, Forevernote can not only hook you up with a professional biographer to help craft your narrative, but will also supply a printed (or e-) book telling your or a loved one’s story.

It really seems like a person’s stance on reclining airplane seats is linked to their height. Future arguments should contain that info.

Whoever wrote the 404 Error page for the Financial Times should receive the Nobel Prize for Economics. 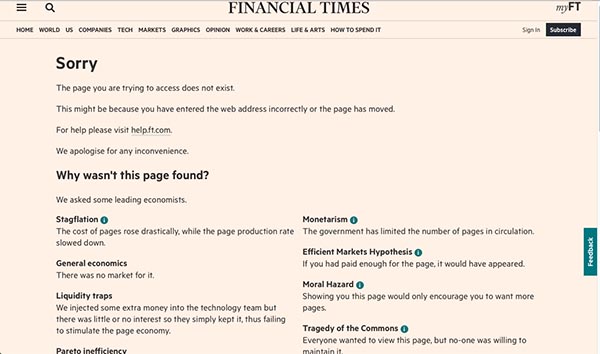 Some Staples stores in Boston are getting podcast studios https://t.co/maA7fqv9wB pic.twitter.com/tealTywFK3

Here is one of those headlines that make you sigh. From CNBC: “Apple Watch outsold the entire Swiss watch industry in 2019.” “Strategy Analytics estimates that Apple shipped 30.7 million units worldwide of its smartwatch last year, compared to 21.1 million for all Swiss watch brands combined. To counter the onslaught from the technology players, traditional Swiss watchmakers launched their own smartwatches.”

Would You Believe Two Cones of Silence?

In other accessory news, what about an anti-smartwatch?

Some of you may be old enough to recall the old spy spoof Get Smart. One of the running gags was the “Cone of Silence,” an ill-advised device that was designed to keep secret agents’ conversations private. (It never worked.) Anyway, in today’s “everything is listening to us” world, such a Cone might be necessary. However, two interconnected plastic domes are cumbersome and prone to TV comedy slapstick, but the “Bracelet of Silence” may be a more practical idea. Says the New York Times:

Last year, Ben Zhao decided to buy an Alexa-enabled Echo speaker for his Chicago home. Mr. Zhao just wanted a digital assistant to play music, but his wife, Heather Zheng, was not enthused. “She freaked out,” he said.

Ms. Zheng characterized her reaction differently. First she objected to having the device in their house, she said. Then, when Mr. Zhao put the Echo in a work space they shared, she made her position perfectly clear:“I said, ‘I don’t want that in the office. Please unplug it. I know the microphone is constantly on.’”

Mr. Zhao and Ms. Zheng are computer science professors at the University of Chicago, and they decided to channel their disagreement into something productive. With the help of an assistant professor, Pedro Lopes, they designed a piece of digital armor: a “bracelet of silence” that will jam the Echo or any other microphones in the vicinity from listening in on the wearer’s conversations.

Hmmm...we wonder if the Swiss watch industry read that.

The origin of the phrase ‘in a nutshell’ can be traced to Pliny the Elder, whose Natural History mentions a complete manuscript of Homer’s Iliad that was so small it it could fit inside the shell of a nut.

In a World Where Punctuation Is Used Recklessly...

Period drama, indeed: Emma. was too much, it seems. The pedants at the Guardian (and since we link to this with relish we consider ourselves not averse to pedantry) have rounded up some of the “worst grammar crimes in film titles.” There are probably worse things to fret about these days, but even back in the 1990s, this one always kind of vexed some of us:

Traditionally a slash means “or”. But the film isn’t really about the choice between “face” or “off” is it? It’s between “face” (of John Travolta) or “face” (of Nicolas Cage). So: Face/Face. A sad grammatical error in an otherwise perfectly scientifically factual movie about men who swap faces then switch back again with no medical complications at all.

In a Weird Way, That’s Not Better

Justin Bieber was accused of stealing a melody, but it’s actually a royalty-free sample you can buy online https://t.co/dLyLPKTM6z pic.twitter.com/lOIOSB7mYO

For some of us, “making sick beats” means it’s time to see the cardiologist, but for those of a hipper inclination, via The Verge, you can use Microsoft Excel as a drum machine, for some reason.

Late last year, electronic musician and YouTuber Dylan Tallchief made a functional drum machine in Microsoft Excel after a bunch of Excel DAW memes made their way around social media. Now, Tallchief is back with an even more ambitious project that fully realizes the original meme’s potential: an Excel DAW he calls xlStudio. (For those outside the audio world, DAW stands for “digital audio workstation” and is a software suite like Ableton or FL Studio used for making music.)

Tallchief walks through xlStudio’s features with a cover of a-ha’s “Take On Me,” using patches that sound like they were designed by an early ‘90s Japanese sound card company. It’s surprisingly robust: there’s a transport section with playback controls, a looping function, the ability to solo and mute tracks, and global settings that assign the track’s BPM, legato, swing, and output routing.

We shall have to investigate (oh, Debbie...). Next year’s Printing Outlook 2021 special report may come with its own soundtrack.

Again, there are probably worse things to worry about, but, via the BBC, the manager of a Victorian sweet shop manager has quit over the decision to add bar codes to the store’s products. “Mrs Lihou said it was a shame to modernise the ‘beautiful’ shop, which was ‘kept right through the war’. ‘For [the items] to become barcoded, I couldn't do it,’ she added.”

Don’t tell her about the plans to add augmented reality.

Say what? We’ve read this headline five times and still can’t make neither heads nor tails out of it: “Kentucky Fried Chicken and Crocs collaborate to make clog with plastic meat appliques.”

KFC teamed up with Crocs to make this colorful clog that has fake chicken nuggets attached to it, which are "made to resemble and smell like fried chicken," but are sadly "not for human consumption."

Thinking about the vast number of tweets to which this could be a response...some lovely, some horrifying.... https://t.co/ynKnQZiRyq

Where the Rubber Meets the...

February 13th, apparently, is International Condom Day, and to commemorate said day, someone has used a 3D printer to print a condom dispenser. You can see all about it in this YouTube video. (The video is sort of NSFW, except in the WhatTheyThink Slackosphere.)

1781: French physician and inventor of the stethoscope René Laennec born.

1904: Madama Butterfly receives its première at La Scala in Milan.

1745: Italian physicist and inventor of the battery Alessandro Volta born.

1885: Adventures of Huckleberry Finn by Mark Twain is published in the United States.

1930: Elm Farm Ollie becomes the first cow to fly in a fixed-wing aircraft and also the first cow to be milked in an aircraft. (That’s why you never want to be in Southwest’s C boarding group.)

1847: The first group of rescuers reaches the Donner Party. They politely decline a dinner invitation.

1949: Ezra Pound is awarded the first Bollingen Prize in poetry by the Bollingen Foundation and Yale University.

1953: Georgia approves the first literature censorship board in the United States.

1963: The publication of Betty Friedan’s The Feminine Mystique reawakens the feminist movement in the United States as women's organizations and consciousness raising groups spread.

1816: Rossini’s opera The Barber of Seville premieres at the Teatro Argentina in Rome.

1872: The Metropolitan Museum of Art opens in New York City.

1877: Tchaikovsky’s ballet Swan Lake receives its premiere at the Bolshoi Theatre in Moscow.

1926: American author and screenwriter Richard Matheson born. He was legend.

1933: The U.S. Congress approves the Blaine Act to repeal federal Prohibition in the United States, sending the Twenty-first Amendment to the United States Constitution to state ratifying conventions for approval. And there was much rejoicing throughout the land.

1962 : While aboard Friendship 7, John Glenn becomes the first American to orbit the earth, making three orbits in four hours, 55 minutes.

1804: The first self-propelling steam locomotive makes its outing at the Pen-y-Darren Ironworks in Wales.

1828: Initial issue of the Cherokee Phoenix is the first periodical to use the Cherokee syllabary invented by Sequoyah.

1842: John Greenough is granted the first U.S. patent for the sewing machine.

1878: The first telephone directory is issued in New Haven, Conn.

1947: In New York City, Edwin Land demonstrates the first “instant camera,” the Polaroid Land Camera, to a meeting of the Optical Society of America.

1958: The CND symbol, aka peace symbol, commissioned by the Direct Action Committee in protest against the Atomic Weapons Research Establishment, is designed and completed by Gerald Holtom.

1878: In Utica, N.Y., Frank Woolworth opens the first of many of five-and-dime Woolworth stores.

1924: U.S. President Calvin Coolidge becomes the first President to deliver a radio address from the White House. We bet it was riveting.

1983: The notorious Broadway flop Moose Murders opens and closes on the same night at the Eugene O’Neill Theatre.

1455: Traditional date for the publication of the Gutenberg Bible, the first Western book printed with movable type.

1898: Émile Zola is imprisoned in France after writing J’Accuse…!, a letter accusing the French government of antisemitism and wrongfully imprisoning Captain Alfred Dreyfus.

1927; U.S. President Calvin Coolidge signs a bill by Congress establishing the Federal Radio Commission (later replaced by the Federal Communications Commission) which was to regulate the use of radio frequencies in the United States.