What happens when a print publication goes all-digital? Has Apple News Plus cannibalized publications’ own digital efforts? Gannett and GateHouse to merge and create the biggest newspaper publisher in the US. What is in store for AR in 2020? Well, not Apple Glasses. Manhole cover-based art. Painting on Vans loafers. Hacking into pet dishes? A unique way to drug your Thanksgiving guests. All that and more in WhatTheyThink’s weekly miscellany.

The dedication in P.G. Wodehouse's 'The Heart of a Goof'. pic.twitter.com/CnaYBCFxqf

Mediaite shares the results of a study of erstwhile print publications that went all-digital. “Published in Journalism Practice, the study suggests that publications that have ended their print editions could be sacrificing a valuable measure of engagement with their readers: time.”

Using data from Comscore and the United Kingdom’s Publishers Audience Measurement Company, researchers estimated that the amount of time readers spent interacting with NME [aka New Musical Express] fell by a staggering 72 percent in the year following the magazine’s print closure. That amounts to a loss of 307 million minutes of engagement compared with the last year that NME was in print, when readers spent 424 million minutes with the publication, according to the study.

So thrilled about our new state law that requires you to smack anyone who uses the expression "easy peasy."

Has Apple’s Apple News Plus subscription service been good or bad for publishers? The CEO of Condé Nast isn’t sure. Says the Verge:

Lynch’s comments suggest that it’s too early to tell whether the service has been good or bad for the publishing industry. “I hope Apple News Plus is wildly successful,” the CEO said. “Whether it’s good for publishers like us or not is to be determined.” However, Lynch was more clear in responding to concerns that Apple’s service could undercut existing pay-walled services, noting that “We haven’t seen that effect.”

Lettuce Be Careful Out There

In 2018, more people were killed in the USA by lettuce than by snakes and alligators combined.

Under the terms of the deal, New Media Investment Group, the parent of GateHouse Media, will acquire its smaller rival, Gannett. The new company will go by the name Gannett and include longtime Gannett papers like USA Today, The Arizona Republic and The Detroit Free Press along with GateHouse publications like The Palm Beach Post, The Austin American-Statesman and The Akron Beacon Journal. Their combined print circulation will exceed eight million, according to the University of North Carolina researchers.

The deal will also lead to annual cost savings of up to $300 million a year, the companies said upon announcing the deal in August. Executives have not specified how the savings would come about while insisting that the deal would “enhance quality journalism.” Job cuts, in newsrooms and other areas, are likely.

Wolf in the Fold

In 2002, high school student Britney Gallivan set the world record for folding paper in half at 12 folds. This disproved the common belief that paper could only be folded in half 7 times. https://t.co/5Szbe1oQt3

We love forecasts like this: “According to Statista, in the space of five years, augmented reality headsets will go from generating $200 million in revenue to a seismic $48.7 billion industry.” That’s just over half the value of the entire printing industry. Make of it what you will. Anyway, IT Pro Portal looks at what we can expect in the world of augmented reality (AR) in 2020. There’s a lot more than can be summarized here, but a few things caught our attention:

Augmented reality will continue its march into hands-on industries like engineering, education, and healthcare in 2020. The practical applications of AR technology are far-reaching and extend way beyond the realms of gaming and communications.

AccuVein is also making waves in the industry of healthcare, with AR technology capable of mapping out a subject’s network of veins and arteries to help improve the accuracy of doctors finding a vein in their patients.

Companies like Microsoft are already investing money into providing a video-calling system that offers users the option of displaying digital renderings of participants - enabling points to be made more effectively, as well as diagrams and charts to be presented more effectively.

Interesting idea...We’re playing with this concept, and can share this sneak preview of an upcoming WhatTheyThink webinar.

Elsewhere in AR land, a 2020 launch of Apple Glasses turned to be rather ambitious; 2023 is more likely, with an AR headset due in 2022, says a new report. “ It also noted that the product will be used for gaming, video streaming, and meetings. Both the products mentioned above will feature a new ‘3D sensor system’ for operation. This new sensor will first enter the market with the iPad Pro in 2020.

We like the phrase “female pirate printer,” and, no, that’s not a new inkjet device that prints on female pirates (that would be a narrow niche application), but rather artist Emma-France Raff, “who decorates clothing and tote bags guerilla-style in the street using ink, a roller and manhole covers as her printing press,” says the Guardian. “Raff, who has turned the streets of Berlin, Barcelona, Istanbul, Paris, Porto and Stavanger – among others – into fashion has always been fascinated with tiny details spotted while out and about, and finding inspiration in often overlooked elements of the urban landscape. The appeal of manhole covers, she says, is that they often have a local flavour.” 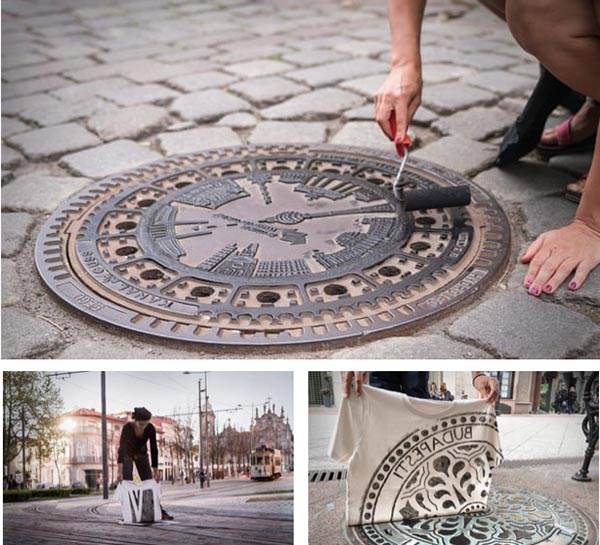 Pretty neat, although there are probably a few ink-stained sewer workers who are not fans.

No other textbook, and possibly no other book, will ever have a better opening paragraph than Goodstein's "States of Matter": pic.twitter.com/XkjvEj6sZR

Over at Boing Boing, a portrait of the artist as a young Vans... An artist who hand-paints images on Vans loafers. 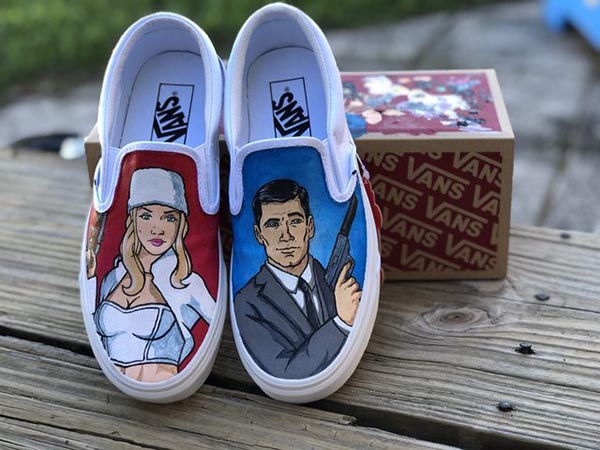 Imagine what he could do on a pair of Bruno Maglis.

Sweden has the right idea. Instead of punishing bad behavior, why not reward good behavior?

A speed camera program in Stockholm rewarded drivers who were snapped driving under the speed limit by entering them into a lottery. The average speed dropped by over 4mph.

Regardless of one’s political inclinations, one still has to admire the artistry of this leopard print shirt that is actually a pattern of Ruth Bader Ginsberg’s face. 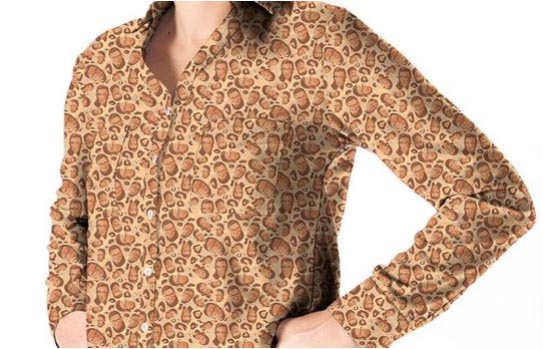 We can envision an entire Supreme Court justice fashion line, and not just the current nine. A set of William Howard Taft bedsheets would be the perfect Christmas gift.

TNT was invented in 1863 for use as a yellow dye, and nobody discovered it was explosive for nearly 30 years.

This story raises more questions than it answers. From Popular Mechanics: “A Security Flaw Lets Hackers Overfill Your Pet's Bowl.” If it’s immeasurably silly, you can bet the Internet of Things is involved. And indeed it is. There is apparently such a thing as a smart pet feeder, but—surprise surprise—it can be hacked.

A Russian cybersecurity researcher accidentally discovered a vulnerability in an entire line of smart pet feeders, built by a Chinese electronics firm.

The flaw lets hackers gain access to the pet feeders, letting them do things like overfeed your cat or dog.

Are you dreading the holidays? Looking for a way to mellow out your Thanksgiving dinner guests? Here’s an idea that sounds like something out of a classic episode of Barney Miller: cannabis-infused turkey gravy. But you better act fast (if you’re capable of moving fast):

Kiva Confections—the California cannabis company renowned for its gourmet chocolates, gummies, and mints—is here to alleviate all of that. The brand is releasing its first savory endeavor: an extremely limited THC–infused gravy. And by limited, I mean only 135 single–serving packages we made. (They’re only available in SoCal’s three Sweet Flower dispensaries and Grassroots in San Francisco, so move swiftly.)

Why not just add LSD to the gravy and really let the turkeys fly!

You Do the Meth

South Dakota has launched a campaign to combat meth.

We’re taking aim at the drug problem and shooting heroin!

1787: French physicist and photographer, and inventor of the daguerreotype, Louis Daguerre, born.

1883: American and Canadian railroads institute five standard continental time zones, ending the confusion of thousands of local times. Well, it was about time.

1928: Release of the animated short Steamboat Willie, the first fully synchronized sound cartoon, directed by Walt Disney and Ub Iwerks, featuring the third appearances of cartoon characters Mickey Mouse and Minnie Mouse. This is considered by the Disney corporation to be Mickey’s birthday.

1959: The Ford Motor Company announces the discontinuation of the unpopular Edsel.

1967; The establishment of TVB, the first wireless commercial television station in Hong Kong.

1998: Vincent van Gogh’s Portrait of the Artist Without Beard sells at auction for US$71.5 million. With beard? Don’t even ask.

1924: Polish-American mathematician and economist, and coiner of the term “fractal,” Benoit Mandelbrot born.

1969: The Plain Dealer publishes explicit photographs of dead villagers from the My Lai Massacre in Vietnam.

1676: The Danish astronomer Ole Rømer presents the first quantitative measurements of the speed of light.

1877: Thomas Edison announces his invention of the phonograph, a machine that can record and play sound.

1905: Albert Einstein’s paper that leads to the mass–energy equivalence formula, E = mc², is published in the journal Annalen der Physik.

1969: The first permanent ARPANET link is established between UCLA and SRI.

1928: The premier performance of Ravel’s Boléro takes place in Paris.

534 BC: Thespis of Icaria becomes the first recorded actor to portray a character onstage.

1889: The first jukebox goes into operation at the Palais Royale Saloon in San Francisco.

1924: Edwin Hubble's discovery, that the Andromeda “nebula” is actually another island galaxy far outside of our own Milky Way, is first published in The New York Times.

1936: Life magazine is reborn as a photo magazine and enjoys instant success.

1963: The BBC broadcasts the first episode of An Unearthly Child (starring William Hartnell), the first story from the first series of Doctor Who, which is now the world’s longest running science fiction drama.

1859: Charles Darwin publishes On the Origin of Species.

1962: The influential British satirical television program That Was the Week That Was is first broadcast.