Around the Web: Graphene Has its Own Conference. Grin and Bear It. Write About Happiness. Where Have All the English Majors Gone? The Internet in 2030. Epic Flight. IKEA Tarot Cards.

The 14th Graphene Conference meets in Silicon Valley. Bear Naked and Sustainable Pouches. Using digitized books to gauge happiness. English majors are down 25%. What will the Internet look like in 10 years? What does 19 hours on a plane do to the human body? All that and more in WhatTheyThink’s weekly miscellany.

As of 2019, the total amount of space needed to put the text files of the whole of English Wikipedia onto a memory stick is 16GB.

Cary Sherburne’s favorite material—graphene—is in the news again! Proponents are gathering in Silicon Valley for the 14th Graphene & 2D Materials show, a B2B conference dedicated to graphene commercialization. The industry is seeing large and diverse orders  including thermal spreaders in smart phones and cars, battery electrode additives, anti-corrosion paints, and additives for polymeric pipelines. Hoping they also address the value of graphene to technical textiles!

Bear Naked Stands Up for Recyclability

Says Packaging World: “Confronted with questions around sustainability, the flexible packaging industry is working to make recyclable pouches a reality in support of a more circular economy, using the How2Recycle label.”

One of the trickiest things to attempt to objectively and empirically measure is happiness. Surveys that aim to evaluate how happy people are can often be problematic at best. However, via The Big Picture, an interesting study in Nature that attempts to gauge the happiness of various countries—by analyzing books.

it is difficult to estimate how happy people were during previous centuries. Here we show that a method based on the quantitative analysis of natural language published over the past 200 years captures reliable patterns in historical subjective wellbeing. Using sentiment analysis on the basis of psychological valence norms, we compute a national valence index for the United Kingdom, the United States, Germany and Italy, indicating relative happiness in response to national and international wars and in comparison to historical trends in longevity and gross domestic product. We validate our method using Eurobarometer survey data from the 1970s and demonstrate robustness using words with stable historical meanings, diverse corpora (newspapers, magazines and books) and additional word norms. By providing a window on quantitative historical psychology, this approach could inform policy and economic history.

Let’s hope historians of the future don’t try using Twitter for this.

King of All Media

David Attenborough is the only person to have won BAFTAs for programmes broadcast in black & white, colour, HD, 3D, 4K and VR.

Here is a sobering statistic via theWashington Post: “English majors are down 25.5 percent since the Great Recession.” (That is, the number of English majors is down 25.5%, not that English majors are 25.5% more depressed, although both those things could be true.) And not just English majors: humanities majors in general are down, as more students opt for STEM classes, especially computer science and engineering. That’s not terribly surprising—that’s pretty much where the jobs have been.

But at least one economist bemoans the decreasing emphasis on the humanities—especially history.

Nobel Prize winner Robert Shiller’s new book “Narrative Economics” opens with him reminiscing about an enlightening history class he took as an undergraduate at the University of Michigan. He wrote that what he learned about the Great Depression was far more useful in understanding the period of economic and financial turmoil than anything he learned in his economic courses.

Other economists are also stressing that it makes sense to not neglect humanities classes even if one’s major is in a more technical field. We can learn a lot from history—but most important of all, we need people who are able to communicate those technical and scientific ideas. “We need storytellers,” the economists say.

And, about those jobs... “Contrary to popular belief, English majors ages 25 to 29 had a lower unemployment rate in 2017 than math and computer science majors.”

Gizmodo asks, “What will the Internet look like in 2030?” They asked a variety of scholars and other experts and the general consensus is that it’s going to be less of a World Wide Web and more of a network that splits into clans and tribes—and we’re already seeing that today. Indeed, today may very well be the end of the “good old days” of the Internet (although for some, the good old days of the Internet ended in 1998).

Finally, an alignment chart all writers can agree on. pic.twitter.com/dySxkzNuP4

Qantas is performing human experiments in endurance, testing the 10,100-mile, 19½ hours nonstop flight from New York to Sydney, Australia. Angus Whitley of Bloomberg describes his experience on one of the beta flights—which sounds like training for a marathon—or something The Bad Place would inflict on humans.

Says the BBC: “Rats taught to drive tiny cars to lower their stress levels.” Put them on the Mass Pike and the stress levels will shoot right back up.

Room Service: And what would you like with your oatmeal?
Me: A decimal point? pic.twitter.com/6h803i1eKt

All You Need Is AI

She’s so I love her heart.
Well they are; they said I’m so many,
She no surprise
When you’re mine
Sad and the Amsterdam Hilton
they make my way,
Yes I wait a boy been born with a rich man,
all share

OK, so it got off to a rocky start (sounds more like Interpol lyrics). It just takes more machine learning.

My sweet little darling can’t you see,
how wonderful it is when you’re mine.
If only I could be your lover forever,
I can never get my heart, I can’t get my mind.

Getting better all the time (can’t get any worse).

Via Boing Boing, “Akiva Leffert has designed an Ikea-themed tarot deck.” And why not? It’d be interesting to see what the Death card is. 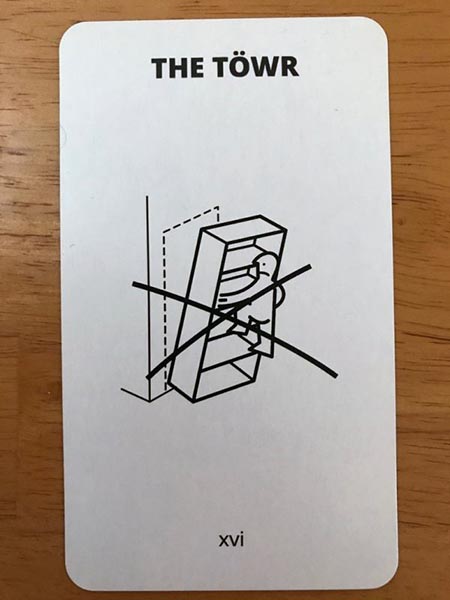 It is available at Etsy.

However, as far as we are concerned, nothing can beat the Hello Kitty Tarot Deck. 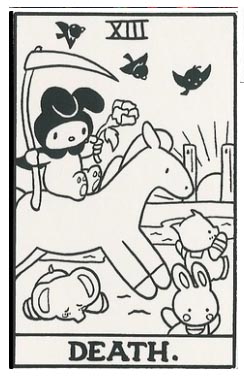 1833: Swedish chemist and engineer, inventor of dynamite and founder of the Nobel Prize Alfred Nobel born.

1879: Thomas Edison applies for a patent for his design for an incandescent light bulb.

1940: The first edition of the Ernest Hemingway novel For Whom the Bell Tolls is published.

1959: In New York City, the Solomon R. Guggenheim Museum opens to the public.

1861: The first transcontinental telegraph line across the United States is completed.

1911: Orville Wright remains in the air nine minutes and 45 seconds in a glider at Kill Devil Hills, N.C.

1946: A camera on board the V-2 No. 13 rocket takes the first photograph of earth from outer space. 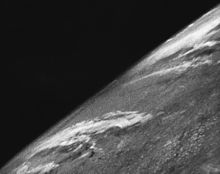