He may or may not be Irish, but he leads the parade when it comes to straight-talking printers about their obstacles, options, and opportunities. 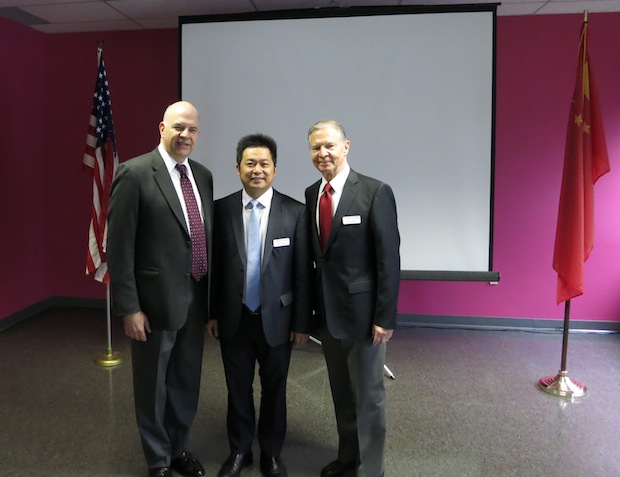 Dr. Joe Webb (left) with CRON-ECRM executives Mike Xiang, chairman of the board, and Rick Black, president and CEO.

I don’t know whether Dr. Joe Webb claims Irish ancestry, but I do know that he possesses a talent for blarney that any of my immigrant ancestors from County Clare would have recognized right away. The only time he dials back the Celtic charm is when he’s speaking with the bluntness of a shillelagh about print industry economics—as he did to notable effect this St. Patrick’s Day at a company called CRON-ECRM in Tewksbury, MA.

CRON-ECRM, a Chinese and American partnership for computer-to-plate systems and related prepress technologies, celebrated March 17 by holding an open house for customers and trade media (an event we’ll cover in detail in a separate article). Dr. Joe keynoted the presentations with an overview of a starkly changed business landscape for printing companies and some equally gritty advice about surviving in it.

Dr. Joe has become known as “Doctor Doom”—a moniker he doesn’t disavow—for refusing to sugar-coat what he sees as bad news in the talks and briefings he regularly gives to print industry groups. He was a bit more optimistic at CRON-ECRM, professing to see better times ahead for the industry now that its vital numbers have begun to rebound (or at least have leveled off). But, his recommendations pulled no more punches than they ever have.

He began with a review of print consumption in the 40 years since 1972. His chart showed that after reaching a peak in 1995-1996, the country’s appetite for print dropped steadily to a point where it is lower now than when the counting began. The sharpest plummet occurred around 2010, and the general economic recovery since then shows no signs of changing the trend.

It indicates, said Dr. Joe, that “growing companies are not riding a tangible wave of economic growth.” If they are doing well, it must be for reasons other than the all-boats-rising hypothesis that used to explain the relationship between the industry’s fortunes and movements in the GDP.

This does not make the big picture any easier for printers to grasp—or to take comfort from. Although the industry’s profitability, according to Dr. Joe, is only about one quarter of what it was 15 years ago, sales per employee are up because so many plants have vanished. Profit leaders still exist, but the gap between them and the rest who just scrape by continues to widen.

Forces outside as well as inside the industry are at work. The cost of computing and telecommunications goes on dropping, making these technologies more attractive to some than print as vehicles for information exchange. Although print now is cheaper as well, printers have a hard time selling enough of it to generate the revenues and profits they need.

One bad consequence, said Dr. Joe, is the fact that “we’ve been starved for a very long time” in terms of capital investment—the money that printers spend on production systems from CRON-ECRM and other equipment vendors. Spending has managed to creep up a bit since 2010, he noted, despite declines in value of shipments.

Printers who want to overcome the odds can do so by increasing productivity and efficiency. “Don’t cut costs—change them,” urged Dr. Joe, explaining that printers shouldn’t remain bound to business models from 10 years ago. Today, the norms of production are shorter runs, flawless file preparation, robust workflow and management software, and “near-zero spoilage on press and in the bindery.”

Dr. Joe sees hope for the industry in generational change—the passing of company management from those born in the 1940s to those born in the 1970s. The younger generation, he said, grew up in the industry using desktop publishing, computer-to-plate imaging, and the Internet—digital tools that their immediate forebears would encounter only later in life. Unlike the printers of the earlier generation, who rarely experienced industrywide downturns, younger printers learned from the start that print markets could be unpredictable.

Printers with first birthdays in the 1940s may have known “how to print,” but the ones who got here in the 1970s know “why to print,” declared Dr. Joe.

Industry members of all ages must realize that “finance is becoming a competitive advantage” in the business of printing, he continued. Another necessity is forming alliances to obtain new capabilities either through partnership or by acquisition.

Printers who haven’t checked their assumptions about the way clients determine return on investment for the printing they buy may be surprised to learn that the definition of ROI has grown “very fungible,” said Dr. Joe. Because every project has its own specific ROI in the client’s mind, printers must become adept at selling their services on that basis. The question to be ready to answer is, “How does the client know that the return is larger than the cost of dealing with you?”

Dr. Joe said that “agile marketing” is what happens when clients “take marketing off the calendar” and let media schedules set their own pace—yet another new customer-side mindset for printers to adapt to. In general, he concluded,” print production requires constant reinvention to compete with digital media.”

Clearly, even printers blessed with the luck of the Irish will have to learn to play by a new set of rules if they hope to find pots of gold in the work they do. Sláinte to Dr. Joe on St. Pat’s Day for making the rocky road to print profitability a little easier to follow.

Thanks, Patrick. I may not be Irish, but like all non-Irish you get to so for a little while on St. Patty's Day. One of my early bosses, Timothy Francis (he would add "Patrick" to emphasize the point) O'Sullivan would refer to the day as "the high holy day." We unfortunately lost him in the WTC collapse on 9/11, but one can't chuckle about the nice memory of his annual greetings every March 17. Everyone had to spend the day with Tim, and he would hold court and utter stories of the poverty in Ireland that families fled. Your reference made me think of him, so thanks for that.

As for the article and summary, just yesterday (St. Joseph Day, important to me and my half-Italian heritage) I was at the Triangle American Marketing Association annual panel of CMOs, and the topic of ROI came up. My comments of the CRON-ECRM event were confirmed. They're all managing it differently. And yet again, use of print was mentioned only once from the audience in the Q&A and the panel did not answer it, going off in other directions. One CMO stated "if we can't measure it, we're not using it." Yes it is getting that dramatic.

They were asked what they are looking for in new hires and the consensus was that new marketing personnel must be "data driven" and fluent in "inbound marketing." We discuss these issues in our books, so they're still on topic, especially This Point Forward.

I was a marketing major -- this is not the marketing environment I was educated for, most certainly. Marketing education was as a generalist. The panel agreed that they are hiring specialists in social media and search engine marketing and then through job experience in their businesses creating generalists from that base. So it's flipped around: you have a better chance at getting hired from specific digital media expertise rather than general marketing knowledge.

That might give printers who have some analytic capabilities a leg up in the marketplace if they focus there as well.