Is it possible to create effective AR scenes without a team of tech-savvy designers? Or spending tens of thousands or hundreds of thousands of dollars? Is AR finally ready to be used even by small and mid-sized shops to solve business problems for their customers? Here is a step-by-step look at what it took to create an AR holotwin and a QR code showing the final result. Readers can judge for themselves.

When it comes to augmented reality, we are seeing a seismic shift. The combination of the emergence of WebAR (mobile browser based rather than app-based), combined with easier to use interfaces, is opening the door to business use cases like never before. But is this something that is realistic for the industry at large to adopt?

Few print shops have the expertise in-house to deploy complex AR scenes. If it requires hiring a new person or having third-party support, let’s face it—the market will be limited. Kind of like what would have happened with the digital printing market if the only printing device you could have purchased back in the 1990s was a high-speed inkjet press. But that’s not what happened. Eventually, smaller, less expensive digital presses came on the market. At that point, digital printing took off. What if it were the same with augmented reality? What if that’s the case now? That AR has become something that even small and mid-sized shops can deploy in-house? Would that change things? It might.

Get ready for change. In the July/August issue of Printing News, I will profile a start-up company called PaperJax that is building its business on solutions powered by augmented reality. Every one of its campaigns includes both a print and an AR component, and it sells and deploys these scenes with nothing but a software license, a digital and 360 camera, and a green screen. As a result, the costs of creating these campaigns fit into the budgets of even small to mid-sized businesses, which all of its customers are. All of PaperJax’s campaigns are also designed to generate revenue.  In future articles, I will profile other companies using AR in real revenue-generating applications, as well.

I have written before about how easy this process has become, and that even shops without techie designers can do it. But is that really true? If it is, then I should be able to do it, too. So I decided to find out.

Here’s the my experience step by step…and the results.

Step 1: Set up a green screen.

I purchased a green screen—basically, a sheet of lime green  fabric with a hanging sleeve—from Amazon.com for $18. I used a piece of scrap wood and hung it on the wall in my office. 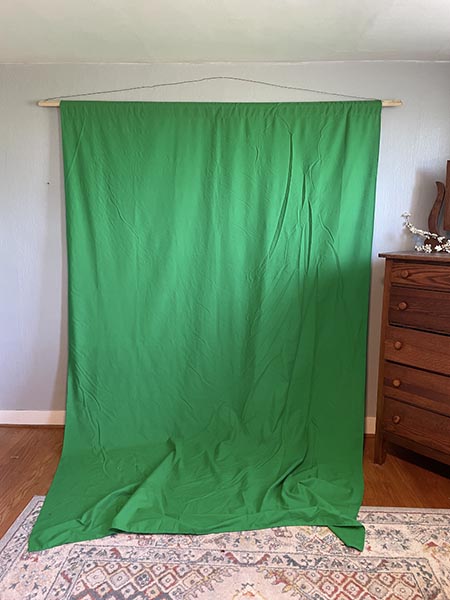 I set up my iPhone on an antique writing desk and moved the desk back and forth until the video captured me from head to toe, but with as little unnecessary space as possible.

I created a short test script and printed it out in 24-pt bold type. I then taped the script to the top of the desk so it was about eye level to where I would be standing. This allowed me to read the script from a distance but appear to be speaking directly into the camera. 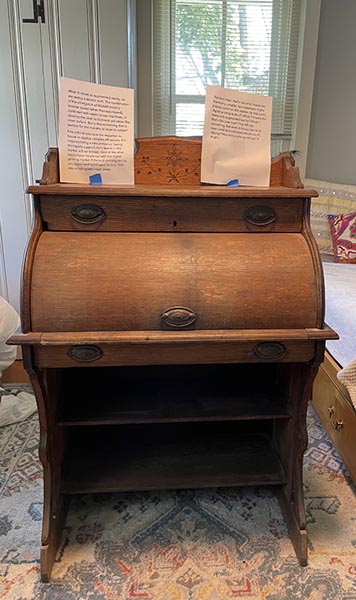 It took a few tries (OK, it took a lot of tries), but I finally got a take that, for proof of concept, was good enough. Any background noise will get recorded as part of the AR experience, so as you can see, I ended up moving my video location to a quieter are to get a satisfactory result. 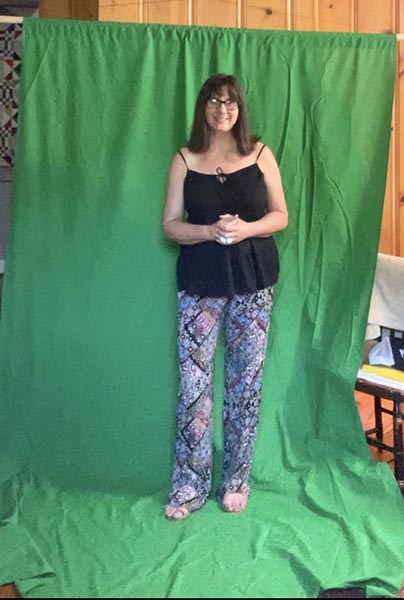 Because it was an iPhone video, it was shot in .MOV format and showed the environment around the green screen. I used Adobe Express to crop the video tight so it showed just me, with the green screen behind, and converted it to MP4 format. Then I used AirDrop to transfer the file to my computer.

Step 6: Set up the holotwin.

Heidi's holotwin as a thumbnail preview image for text marketing.

Once I had the video ready to upload, it took me no more than five minutes to go through these steps. 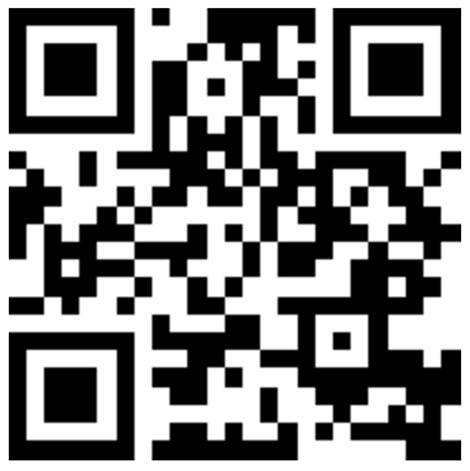 Scan to see Heidi's holotwin come to life in front of you.

The most difficult part of the experience was getting the video right. Writing a decent script that wasn’t too long. Delivering it in a way that wasn’t too boring. Not messing up the delivery. Making sure I didn’t accidentally reveal the carpet by pulling up the bottom of the green screen with my feet. Trying to keep the glare off my glasses—all the things that are the standard purview of professional videographers, but with a little effort, can be done without one.

In crafting this experience, the biggest thing missing was better lighting. This would have made my holotwin sharper, especially at when blown up to a larger size as viewed through a mobile screen. If I were operating in a print shop, with an actual studio setup, the holotwin would have looked even sharper and clearer. But this is a proof of concept, and for something set up in a morning in my home office, it makes the point that I was trying to make. If I can do it in my home office, you can do it in your print shop.

Is AR ready for widespread industry adoption? Judge for yourself—and keep an eye out in the July issue of Printing News for how PaperJax is using holotwins and AR portals to drive business for its customers in real revenue-generating applications.

So I had you standing on my keyboard going on about AR. AR has now been around (non-commercially) for over a decade. I have seen print shops try it with varying efforts, good results, bad results, no results. It seems there are niches where it works, and those it does not...but even today there is still a 'cool' factor (maybe not as cool as a AOL account :-)) in having someone standing on your keyboard telling you about AR. Thanks for the reminder that I don't need a massive studio and budget to use a unique messaging channel.

Thanks, Danny. That's why I opened the piece with "stay tuned" for the article in the printed edition looking at the shop producing AR campaigns. In the upcoming piece, I think I talk about more than half a dozen campaigns the owner is producing — all revenue-driving campaigns. One of them, the AR-fueled rack cards have become his number one traffic generating channel. He's only been in business since earlier this year, and some of these campaigns are contracted but haven't gone live yet (they are in process, waiting on finalization of text), but some of them have. In September, I'll be writing a profile on another company, a design firm, also producing AR-fueled campaigns using holotwins and, in his case, 3D objects. There are three other companies I know that are producing live campaigns, but not everyone is willing to talk publicly yet. Things are changing, so stay tuned. This is a fun time to be watching this technology.

To clarify, when I say "I talk about more than a half dozen campaigns the owner is producing," I don't mean to suggest that's all he's done. He's produced/is producing more than that (and he only opened in February). That's just what I had space for in the article.

Excellent article. It does seem quite simple to setup. I'm thinking of my nephews who are budding freelance photographers / videographers. They could easily contract out their nascent expertise to companies thinking of using AR in marketing campaigns!

It's ease surprised me. The pixelation isn't the fault of the platform. That's me with very, very limited knowledge of video formats and all that. (Writing about AR is one thing. Creating it myself is another!) Anyone with a real studio set-up and knowledge of videography will get a MUCH better result!