Garbage In, Garbage Out, Good Accomplished

How an earth-friendly cleaning products company called method scours the ocean for plastic waste it can recycle into material for new containers. 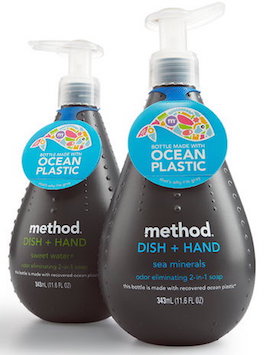 Imagine trudging through an area 34 times the size of Manhattan ankle-deep in plastic garbage. Can’t envision that? Picture swimming in it. That volume of plastic waste—some 8 million metric tons—is what’s been estimated by environmental researchers at UC Santa Barbara to be entering the world’s oceans as pollution every year.

The part we can see—anywhere from 6,350 to 245,000 metric tons slowly spinning on the surface of ocean “gyres”—represents only the beginning of the damage plastic waste does to seas and marine life. Unfortunately, there’s collateral damage to the reputation of the packaging industry as well, because some of the waste consists of plastic containers dumped there by nations and individuals who seem not to know the difference between oceans and landfills.

For several years now, an earth-friendly cleaning products company called method has been using its packaging both to call attention to the problem and to promote an ingenious approach to solving it. Under its ocean plastics project, method and its partners have been recovering ocean-borne plastic waste and recycling it into material for dish-and-hand soap containers—an awareness-raising initiative that casts packaging as an ally, not an enemy, in the quest to keep the world’s oceans clean.

Volunteer groups pick up plastic trash on the beaches of Hawaii, where a good deal of it washes up. Everything they recover goes to recycling specialist Envision Plastics, which uses the process depicted in this video to remanufacture it into material that then can be combined with plastics from other post-consumer sources to make new bottles for method. Whole Foods Market and other supporting retailers sell the bottles with hang tags that explain why they’re special.

The people at method are under no illusions about how much their project can be expected to accomplish in a world that, according to the UC Santa Barbara researchers, now puts as much plastic into its oceans every year as it produced in total in 1961. But, whatever waste it does manage to take out of the seas is an achievement for the entire consumer packaged goods sector to be proud of—and for everyone to be inspired by.