The value of printing shipments for July 2019 was $6.8 billion—up from June’s $6.6 billion. Breaking with seasonality, what has typically been one of the lowest months of the year for printing shipments actually came in pretty good. 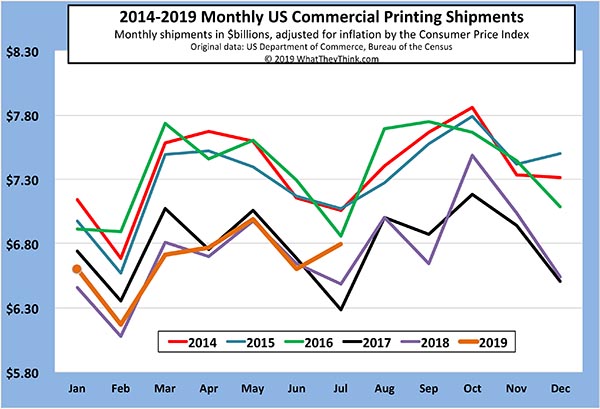 This is pretty good news—here’s hoping August shipments return us to our regularly scheduled seasonality. We’d rather not be unpleasantly surprised.

Still, we do have to caution—aswe always do—that NAICS 323 (which is what these shipments data are based on) isn’t necessarily the only printing-related three-digit NAICS anymore. Some shops are classifying themselves in different kinds of services NAICS, and wide-format and sign manufacturers have their own NAICS classifications. Different parts of the industry are diverging from NAICS 323, which makes tracking industry statistics that much more of a challenge, and can make the industry seem much gloomier than it really is—even though NAICS 323 doesn’t look all that gloomy at the moment, certainly compared to the not-too-distant past.