In 2010, there were 2,124 establishments having 50 or more employees. By 2016, they had dropped to 1,851 (down -13%). So says our new Commercial Printing Establishments tracker, based on data from the Census Bureau’s County Business Patterns, which presents—in spreadsheet form—U.S. commercial printing establishments from 2010 to 2016, broken down by six different print business classifications and nine employee-size breakdowns. 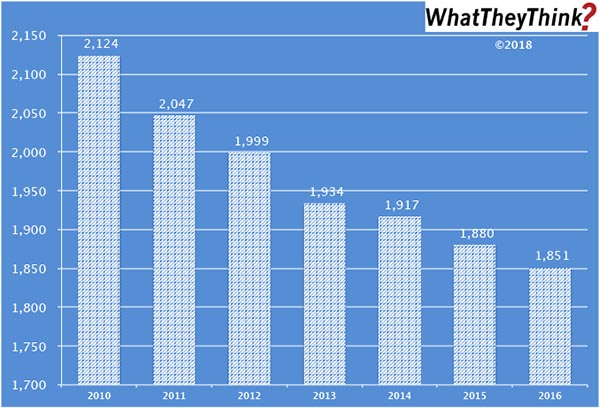 Two weeks ago, we debuted our new Commercial Printing Establishments tracker. We had highlighted small printing establishments, remarking, “In 2010, there were more than 20,000 1–9-employee U.S. printing establishments; by 2016, they had declined -17%.” This week, let’s look at the opposite end of the spectrum—large establishments. In 2010, there were 2,124 establishments having 50 or more employees. By 2016, they had dropped to 1,851 (down -13%). Business is not as volatile at the large end of the establishment spectrum as at the bottom (it’s harder and takes longer for a large printing business to go completely out of business than it does for a small company), but consolidation via M&As rather than outright failures plays a greater role at the high end than at the lower end.

The data in this chart is gleaned from our Commercial Printing Establishments tracker which complements and supplements our regular tracking of printing industry shipmentsand other industry data. Based on data from the Census Bureau’s County Business Patterns, we present—in spreadsheet form—U.S. commercial printing establishments from 2010 to 2016, including establishment counts for six commercial printing business classifications (based on NAICS, the North American Industrial Classification System):

We further break these counts down by establishment size: