Will augmented reality finally gain widespread adoption in print and digital marketing communications? When will it move beyond enterprise applications, gaming, and social media? To find out, ARtillry Intelligence worked with Thrive to survey 2000+ U.S. adults.

Will augmented reality (AR) finally gain widespread adoption in print and digital marketing communications? When will it move beyond its current (and very solidly growing) base of enterprise applications (including education, training, and design), gaming, and social media? To find out, ARtillry Intelligence worked with Thrive to survey 2000+ U.S. adults.

The survey, “Mobile AR: Usage and Consumer Attitudes,” finds that more than one-third of consumers have used a mobile AR app. While this isn’t as high as many would like, the survey also finds that people who are adopting mobile AR aren’t casual users. They are highly active and engaged. For example: 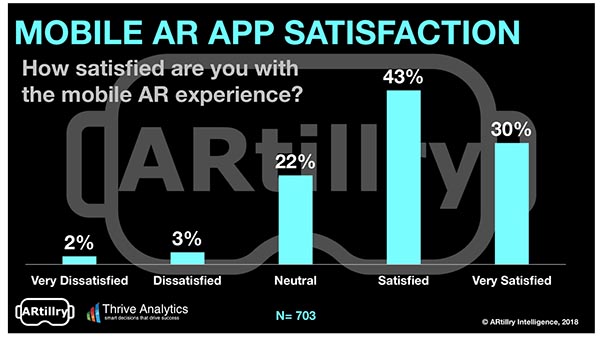 Revenue from these early users is growing. ARtillry projects consumer AR revenues to grow from $975 million in 2016 to $14.02 billion in 2021. Until 2021, however, most of that revenue will come from mobile AR apps and e-commerce rather than marketing opportunities. (The top app category “by far,” according to ARtillry, is gaming.) In a separate report, ARtillry forecasts AR to reach $19.5 billion by 2023 for enterprise applications.

The challenge for adoption in marketing, of course, is anticipating when AR will gain wider spread consumer adoption. The biggest challenge at present, ARtillry indicates, is that the gap between AR users and non-users is vast. While mobile AR users are highly engaged, non-users are highly disengaged. Specifically, non-users report a low likelihood of adopting “soon”and exhibit a lack of interest.

This ARtillry explains, is not unique to AR. It is the challenge for all immersive technologies:

This disparity between current-user satisfaction and non-user disinterest underscores a key challenge for immersive technologies: you have to “see it to believe it.” In order to reach high satisfaction levels, apps have to first be tried.Put another way, AR’s highly visual and immersive format is a double-edged sword. It can create strong affinities and high engagement levels. But the visceral nature of its experience can’t be communicated to prospective users with traditional marketing such as ad copy or even video. . . It will take time and cost reductions before they reach a more meaningful share of the consumer public.

Will AR get there? I think we’re all pretty sure it’s inevitable. AR has already become integrated into the fabric of our lives, even if it’s “trying on” sunglasses through a SnapChat-style filter. We don’t think of it as AR, however. It’s just a functionality that has been normalized and we have come to expect. For mobile AR, that’s a good thing.  People will use AR as long as it’s easy and they don’t have to think too hard about doing it.

Marketers are starting to open their wallets to tap into the enthusiasm of these early adopters, especially since these users’ active participation is translating into revenue. As reported by VXChange, for example:

Research has shown that nearly seven out of ten media planners want to incorporate more AR experiences into their advertising efforts to boost customer engagement. Deloitte’s 2018 report on technology trends for mid-market companies (those with annual revenues between $100 million and $1 billion) found that a majority of them are experimenting with AR in various forms to help grow their business.

So let’s hear from you...those on the front lines of marketing. Are you offering AR in your marketing toolbox? If so, where do you see AR gaining traction?

Heidi Tolliver-Walker’s Augmented Reality (AR) research results are right-on and consistent with the results of the following recent research exploring interest in Clickable Paper (an AR application) in two fields other than the printing industry. This study was posted in WhatTheyThink news on the October 17, 2019.

Compare the quantitative results in the two studies. In these cases, AR starts with printing (ink on paper), and is something that printers should explore as “value-added” for clients.

TITLE: "One OEM is Providing Products That Will Keep Print Vital and Valued." See:
https://hrlsite.files.wordpress.com/2019/10/ricoh-case-studies-press-article-final-approved.pdf

CASE STUDY 2
Long Term Care Ombudsman (LTCO) – See P. 7-8
"Summary of Quantitative Questions of the four categories of responses, over two-thirds (67) of the 100 responses (10 respondents answering 10 questions each) gave the Clickable Paper the highest rating. Less than one-third (30) gave the technology and app the second highest rating, and only two responses fell into the third rating. No responses were recorded in the fourth or lowest category."

CASE STUDY 3
The Sound of Bamboo – Quantitative – See P. 6
"Summary of Quantitative Questions of the four categories of responses, nearly three quarters (177) of the 240 responses (24 respondents answering 10 questions each) gave the Clickable Paper technology and app the highest rating. (Again, a 25th respondent provided only optional comments.) Approximately one-fourth (57) gave the technology and app the second highest rating, and only two responses fell into the third rating. No responses were recorded in the fourth or lowest category. Only four of the quantitative questions were not answered. Hence, over 97 percent of the quantitative responses rated Clickable Paper technology in the two highest categories."