Marketing Lessons from Top Retailers vs. Fastest Growing Ones

I recently downloaded a study from Iterable titled “All Things Retail: The Iterable User Engagement Report.” The study was designed to investigate the marketing strategies of 50 retailers: the top 25 retailers and their 25 fastest growing competitors during two-week period between Black Friday and Cyber Monday in 2018. The top retailers were defined as those boasting the highest CAGR over five years. The fastest growing retailers were defined as those that drove the highest web sales growth the previous year.

The report is comprehensive, so it was tough to pick out one aspect to talk about. Ultimately, what captivated me was the difference between the top retailers and the fastest growing retailers. You’d think that the fastest growing retailers would be growing so quickly because they are doing more of everything. More marketing = more results, right? However, this was not the case. 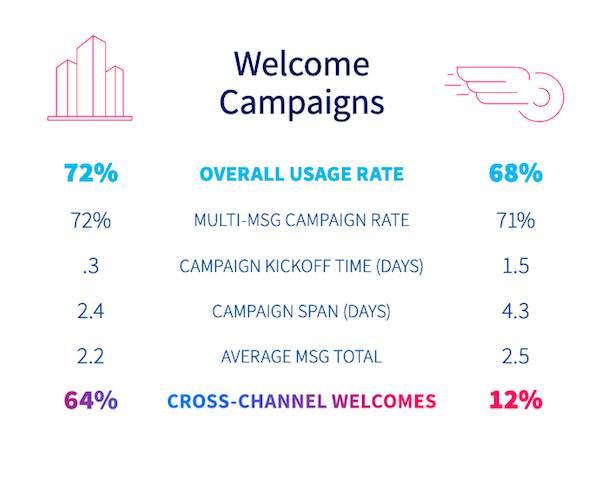 Overall, 70% of these top 50 retailers sent welcome campaigns. This means that 30% had no welcome messaging at all (an interesting customer retention technique). Of those sending welcome campaigns:

71% sent more than one message.

Average number of messages sent was 2.3.

Most of the welcome messaging shared discounts on first purchases, discussed account holder benefits, and offered tips for getting the most out of their memberships. 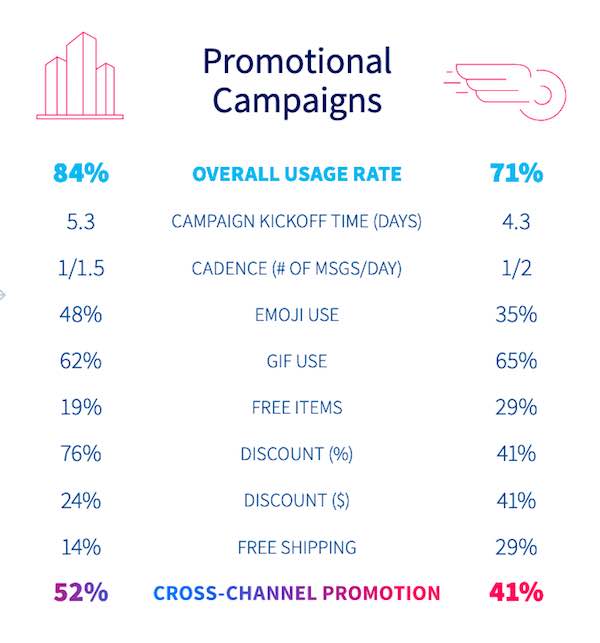 Where the top companies and the fastest growing companies differed more significantly was in their promotional emails. Overall, only 76% of retailers studied sent promotional messaging during the study period. This included 84% of the top retailers, but only 68% of the fastest growing retailers. During the study period, researchers received anywhere from a single message to more than 30 messages from each brand.

Looking at these numbers, it could be inferred that the fastest growing companies may be edging out the top companies when it comes to message ROI—lower volume, higher customer value versus a steady diet of catch-all promotions. 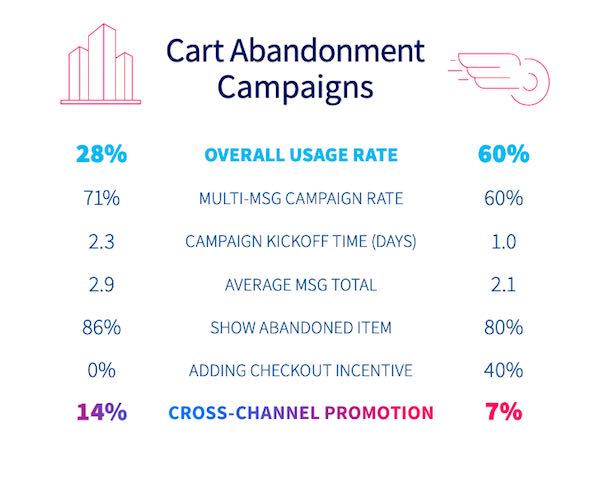 The fastest growing retailers were not only more likely to be using cart abandonment messaging, but they were also more proactive in them. They averaged 2.1 messages sent one day after abandonment, while top companies sent 2.9 messages after 2.3 days.

Forty percent of the fastest growing retailers also offered a cart abandonment incentive, while none of the top companies did.

Iterable offered terrific takeaways when it came to the data at large, and I encourage everyone to download the report and read it. In terms of the differences between top companies and the fastest growing companies, researchers had this to say:

We were surprised at the disparity in campaign usage rates between the fastest growing and top companies. The fastest growing companies appeared to emphasize winning the near-sale. Their faster turnaround times inside tighter windows of relevance made for more effective messaging.

So which model should you and your customers follow? That’s an individual decision, but certainly the strategies are different. We do know that the fast growing companies are competing aggressively against their more established competitors, and clearly their strategies are different. They are nimble and laser-focused, often in ways that go against the prevailing wisdom (such as sending fewer cross-channel campaigns). Business model clearly matters in marketing mix, and growing vs. maintaining often require different approaches.

This data should spark a lot of questions, especially at the C level. Should this research inform your marketing decisions?  If so, how? My suggestion? Carve out a few hours for your executive team, bring in lunch, and talk about it!