Edelmann Demonstrates Its S10 as Landa Moves Towards Commercialization

Keypoint Intelligence – Infotrends’ Ralf Schlozer reports from last week’s open house at Germany’s Edelmann Group, where the company was demonstrating its Landa S10 for folding carton production. Landa aims to step up its press installations through the rest of 2019.

By Keypoint Intelligence Published: May 28, 2019

No other company captured the attention and imagination of drupa 2012 and 2016 like Landa Digital Printing. Some time later, there was a launch event in September 2017 for the first Landa press installed at Graphica Bezalel in Israel including announcements of more presses to be shipped soon.

Since then, news about Landa has been pretty quiet, and even the more patient observers have wondered where the company is heading. That is until the 22nd of May, when Landa invited press and prospective customers to Edelmann, a folding carton printer in Germany, to have a look at the second S10 installed.

As a beta site, Landa did choose a rather demanding partner with the Edelmann group. The company is one of the leading manufacturers of folding cartons with expanding operations in rigid boxes and leaflets. The focus is on high-quality packaging for three verticals: health care, beauty care, and consumer brands. With 21 production sites around the globe and more than 120 offset presses in operation, the company produces more than 5 billion folding cartons and boxes per year. At the event, CEO Oliver Bruns made it clear that there is no compromising on quality.

The S10 at Edelmann was the second Landa press shipped and was already installed in April 2018. It has been in operation and received constant upgrades since. Edelmann technical director Oliver Sattel reckoned that every two months a major upgrade to the press was made, each with considerable improvements to the press performance. The upgrades included the automated quality management system (AQM) and the seven-color option—only a few weeks ago.

Currently, Edelmann is switching between producing real customer jobs and testing/improving the press. According to Edelmann, the share of customer jobs keeps increasing, especially after the seven-color option was installed. As a result, the operation moved to two shifts and the test time is getting squeezed. The press has been already been certified for health and beauty care jobs. 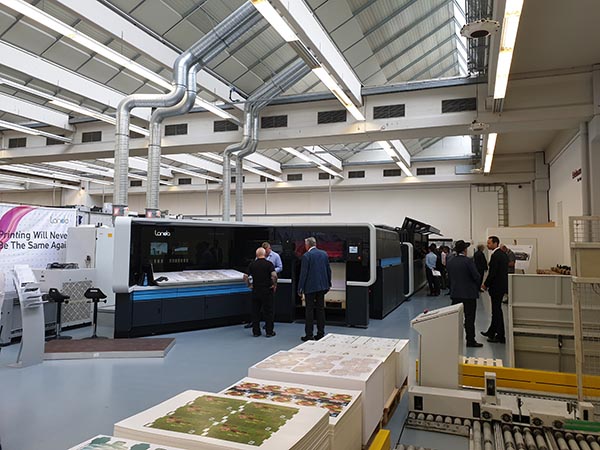 The seven-color option is especially crucial for a packaging printer. So far, Edelmann relies heavily on spot/Pantone colors mixed for each analog print job. When proofing on the press to get the customer acceptance, it is frequently necessary to alter the spot colors, which requires remixing inks, cleaning the press and ink system, and results in considerable downtime. On the Landa press, color changes in spot colors can simply keyed in into the DFE, re-ripped, and reprinted until the customer is satisfied. This was demonstrated at the event. Surely replacing spot colors with emulated colors will require the acceptance of brand owners, but Edelmann sees good progress here. The increasing pressure for supply chain efficiency and agility leaves brand owners almost no choice otherwise. The CEO of the Edelmann group is convinced that they have found the right solution for a changing packaging market and is on track for its ROI. The press has already helped Edelmann find new customers, and the company is already planning to add additional Landa presses.

There are still improvements to be made to Landa presses, however. For the critical viewer, there are still some small artifacts to see, although Edelmann deems the output sellable. In addition, features like full-speed printing at 13,000 sheets/hour, white ink, the waste sheet ejector are still to come. There’s no doubt that there will be lots of improvements in software, electronics, operator interface, consumables and the press in general, but these cannot be judged on such a short visit. Crucially, it is not possible to judge the uptime and the cost per print at this point in time. While the installation makes sense as a strategic investment for a company the size of Edelmann, smaller shops with few presses would be better advised to wait a bit longer.

According to Landa there are three presses in operation today—all Landa S10 for folding carton printing. A fourth press is being installed now at Mercury Print—the first double-sided S10P for commercial printing. Plans are to ship one press a month for the reminder of 2019 and then increase shipments in 2020. The first assembly building has been enlarged already, a second assembly plant has started operations, and a third hall, to be used as a show room and to scale up ink manufacturing, is in construction now. drupa 2020 will surely be the benchmark for Landa on what has been delivered.