Is In-App Use the Future of QR Codes?

Is in-app use the future of QR Codes? As in, not a QR Code app, but someone else’s app? Maybe this explains research that shows that QR Code use is increasing.

Is in-app use the future of QR Codes? As in, not a QR Code app, but someone else’s app? Maybe this explains research that shows that QR Code use is increasing. According to ExactTarget, 34% of U.S. smartphone users have scanned a QR Code, rising to 46% of tablet owners, and Juniper Research predicts that the number of coupons redeemed via QR Codes will reach 5.3 billion by 2022.

How does this square with the fact that nearly everyone I talk to hasn’t scanned a QR Code in years, if ever? I think back to my conversation with four Millennials and one Gen Z in which none of them used QR Codes. Only one had scanned a QR Code—ever—and that was a few years ago. He had a poor experience, so he hadn’t done it since. So what are we to make of data from research companies like these?

The answer might come from Millennial #5, a mom with two children under the age of 12. When I asked whether she scanned QR Codes, she said yes, she does. (Finally! Someone who scans QR Codes besides me.) She scans them on occasion, she said, usually to get something she wants, like a coupon or to compare prices. The coupon made sense, but the price shopping made me pause. Sure enough, when I showed her examples of QR Codes on direct mail or posters, she got confused. That wasn’t what she was thinking.

QR Codes are showing up inside apps where users aren’t thinking about them as QR Codes. Users are simply thinking about using the app. “When I use my Walmart app, I do this. When I use my Subway app, I do that.” Shoppers don’t know what QR Codes are because, if they’re scanning them inside the app, it’s just part of the app. If they see a QR Code on a piece of direct mail for an organization for which they don’t already have an app, it doesn't register. If they are interested in the information, they’ll just Google it. 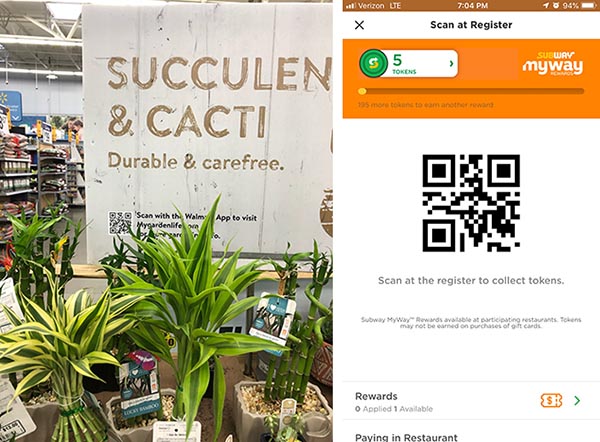 I’m just speculating, but it’s a theory that fits the evidence. Does this mean that, if your clients want to maximize their advantage with QR Codes, they would benefit from an app?