If MSPs want to convince their clients of the value of multichannel marketing, they must be willing to use it to promote their own businesses. That’s why I was excited to see NextPage launching a really fun campaign combining direct mail, email, video, and social media, along with a targeted digital ad buy.

That’s why I was excited to see NextPage launching a really fun campaign combining direct mail, email, video, and social media, along with a targeted digital ad buy.

The goal, according to Gina Danner, CEO of NextPage, was to demonstrate the power of combining digital MCM with high-value direct mail. To engage its target audience, NextPage sent a highly targeted, personalized mailing with pop-out paper airplanes. Recipients were asked to take videos of themselves or their colleagues throwing the planes, then upload their videos to social media (Facebook, Instagram, or Twitter) with the hashtag #flynextpage. The incentive? The opportunity to win a $500 gift card to Southwest Airlines.

“We created two versions of the campaign—one for existing customers and the other for prospects,” says Gina Danner, CEO of NextPage. “Both included a link to landing page that explained the campaign and offered a free ebook that described the details of how the campaign was done.”

The goal was to get people excited about how a highly targeted, personalized multichannel campaign works.

While the campaign did not result in as many videos being uploaded as NextPage hoped, it did generate a lot of conversations with recipients, including inquiries about NextPage creating similar campaigns for their companies. “It never fails that when we do a really cool campaign, clients will call up and say, ‘We want to do what you did,’” Danner says.

The campaign also put a lot of high-quality personalized samples into the hands of key prospects. “Direct mail supports our account executives and gives them something to talk about when they are in front of a client,” Danner explains. “Then, when those clients need advice or guidance on a complex campaign, they pick up the phone and call us. We win those deals every time.”

NextPage is launching a new campaign this month (March 2018). The concept is similar, but NextPage is asking recipients to post a photo instead of a video. Will this make a difference in the response? NextPage intends to find out.

“This is part of our account executives always having something fresh and new to talk about,” notes Danner, who says that NextPage does more direct marketing than any other company in the industry. “That’s why we will keep doing these campaigns again...and again...and again.”

How about you? How are you actively demonstrating the value of multichannel marketing to your clients? 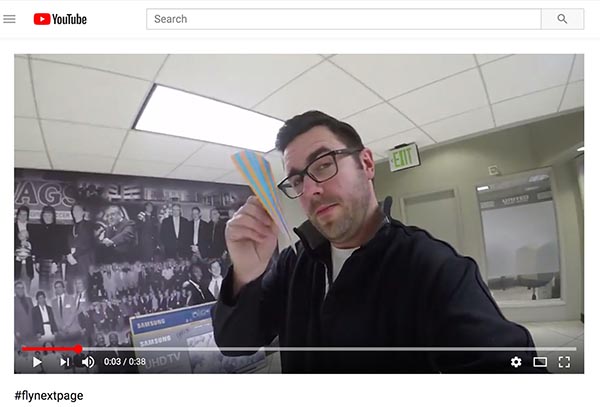 The money quote:
“It never fails that when we do a really cool campaign, clients will call up and say, ‘We want to do what you did,’” Danner says.

The way you demonstrate your competence is by using the the tools you are offering in your very own business.

And then:
Will this make a difference in the response? NextPage intends to find out.

The rules of multichannel media change all the time, and those rules depend on circumstance and target audience characteristics, and other factors. The only way to discover these is by experimentation.

Gina's one of our industry's best CEOs. I'm glad the old guard is gone. Their torch was not passed to her. She has a torch of her own worth carrying.