The Truth is Not Always in the Headline

Look at the shiny object, and please don’t peek behind the curtain. It’s a data game that’s played by many, and it starts with a good headline, and sometimes includes a great chart. A rising stock market without increasing revenue? Declining e-book sales that conveniently ignore niches that are contrary? And then there’s one for the record: the LP record. A pretty chart makes that story convincing, but only if you forget history. Don’t fall into that vinyl LP trap: there’s a hole in the middle of it.

The November Economics & Research Center Webinar discussed our latest forecasts that are in preparation for our new report. The discussion is worth a listen. Access the archive of the webinar and its slides at its page on our site. New registrants have immediate access, thanks to the support of WhatTheyThink Premium members.

The Stock Market’s Great, It’s the Companies that are Bad

The stock market has had a strong surge over the last year, but there is rational skepticism about how much of that rise reflects underlying company growth and how much is financial engineering.

A reminder of this is from the reports of Apple’s new bond issuance that will go toward buying back its own stock. It’s using its cash holdings overseas as collateral, and its after-inflation interest rate is practically zero, so you can’t really blame them. Apple is a special case: it’s a growing company with compelling products, making strides in its efforts around the world. Not all companies are like that.

The latest data for the inflation-adjusted sales per share of the S&P 500 for the second calendar quarter of 2017 were just released. The chart below summarizes the data, with the values for the beginning of the recession, the peak sales per share, the recent low, and the Q2-2017 value noted. 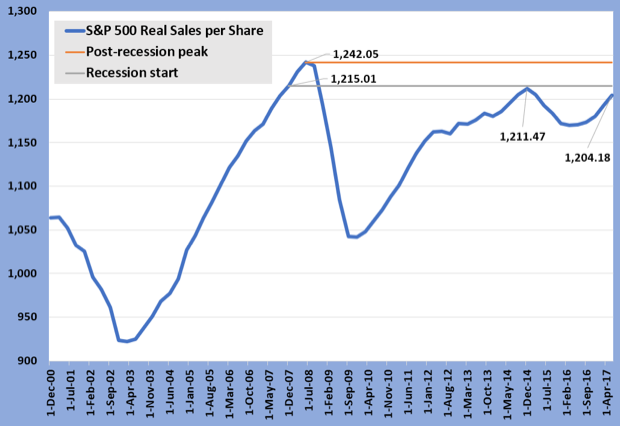 Note that this measure has not reached its pre-recession level, peaked early in 2008, and is still -3% below that peak… that’s more than eight years ago! And then consider this: what would this measure be if the FAANG stocks (Facebook, Apple, Amazon, Netflix, and Google [which now named “Alphabet,” but you can’t make a good acronym with another “A,” so it’s still Google to us]) were excluded? The figure would be significantly lower.

There’s good reason to be skeptical about stock market values, even though there’s never been a reason to avoid stocks for their volatile ride. Good investing takes advantage of downside volatility. But company growth has different rules. Organic growth, not buybacks or tax-influenced austerity policies, should be the driver of increases in a stock’s value. The lack of broad organic growth is one of the primary reasons of sluggish GDP growth.

E-Books are Doing Much Better than Everyone Thinks

The Kindle is 10 years old, so there were some press releases about the state of e-books and printed books. Amazon celebrated with a sale. Others celebrated by telling us that print versions were not dead. And there have been some reports about the decline in e-book sales. Hogwash.

Traditional book publishers are behind that story, that print versions are doing better and that e-books are going down. (Here’s a CNN story from earlier in the year). This was much bally-hooed in the press. There are lots of reasons that data are going in this manner. These data supplied by traditional publishers ignore new channels and independent publishers, and the numerous books now published without ISBN numbers. The headline distortion is deliberately crafted. Some of those traditional publishers have increased e-book prices, and created their own experience of declining unit sales. But… not so fast.

A website that specializes in the comprehensive data about the book market, authorsearnings.com, sets the record straight. Here are some data from their report.

E-books are underrepresented in the commonly cited industry data. On one hand, the printing industry cheers that print is "back," whatever that means nowadays, yet ignores a burgeoning e-book market and the vibrant content creation opportunities within it. The underlying book industry story is about changes in distribution channels, and e-books, especially for independent and self-published authors, is a continuation of the Amazon growth story.

The only two channel categories that had increases in volume were Amazon and independent booksellers. Let's not kid ourselves: independent booksellers are endangered and we're looking at the remaining survivors who are inheriting volume. They are aggressive supporters of the kinds of independent publishers and self-published authors who escape much of data detection of traditional statistics collectors.

There's another aspect of e-books beyond these "new" niches. Authorsearnings.com makes it very clear that certain traditional categories have become strong e-book markets. For example, 49% of adult fiction books from traditional publishers were sold in either e-book or audio format in 2016. I guess that data point doesn’t fit the desired narrative.

But there's yet another area that e-books are not counted at all because they are not sold. These are the books that are part of content marketing and are now as staple of that form of communications. Using books as part of marketing communications is not a new idea -- it's been done for decades in promotions and marketing efforts. The e-book format is inherently flexible as its content can be used to connect with other digital media. Today, the most common use of e-books that nearly everyone involved in content management employs is as an incentive to sign up for newsletters and product information.

The bottom line: the e-book market is underreported on a headline basis, and the numbers and applications are still growing. And… content marketing is making effective use of the e-book format.

Don’t Fall into the Vinyl Trap

It’s important to not fall into something I call the “Vinyl LP Trap.” You’ve heard it: vinyl LP records are making a comeback. Data from the Recording Industry Association of America proves it! Just look! 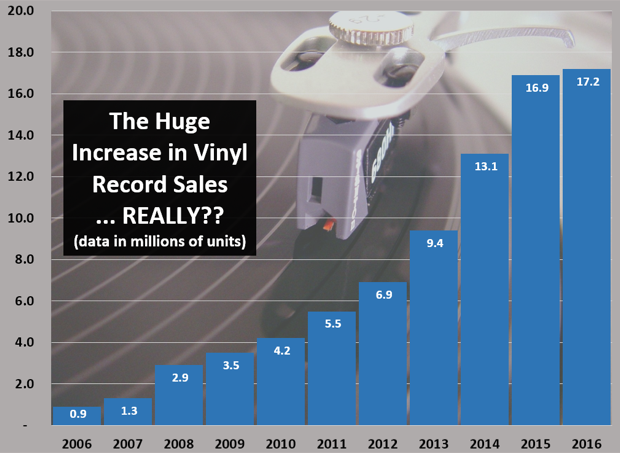 Data are always more convincing when they’re carefully selected and placed in a chart with a color image background. By selecting the years to display only the recent growing ones, no one can see the peak LP year of 1977 where 344 million LPs were sold. Today, that would be the equivalent of 505 million after adjusting for population.

Here are the real long term data. Vinyl LPs are barely a blip. Data are in millions of units. 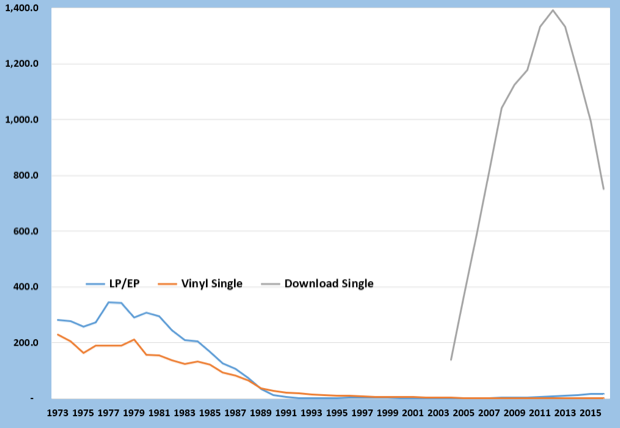 But the population has grown significantly since the beginning of the data series. The chart below shows the data on a per person basis. Note the big difference. 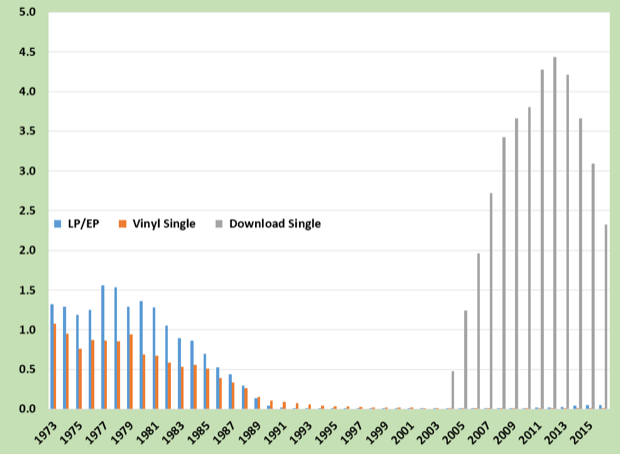 What’s the point? Data need to be in context and in a format that adjusts for factors like population growth that can improve historical comparisons to reveal true growth rates.

Don’t assume that the “download single” category, the format that much of music recordings are purchased today, is falling out of favor. The digital media market is always changing. Services like Pandora, satellite radio, free radio station streaming, all affect the desire to purchase recordings, making them less necessary.

So when you hear that e-books are declining, or print books are rising, or that LPs are returning, be sure to ask what data and segments and niches are included or excluded, and why those data seem so counter to other trends that are so obviously known.

Vinyl is a very narrow niche market for audiophiles who are willing to pay the high prices for limited pressings of exceptional recordings. It’s not coming back. The reasons it is popular with audiophiles will eventually be solved by software.

The Economists Keep Fighting Back Against the Negative Impression of Trade

The economists are right and nearly all of them agree… trade raises the wealth of both sides of the transaction because it supports the economic basics of competitive advantage and division of labor, and how trade deficits are complemented by capital inflows. Economist Mark Perry has been steadfast in his reminding readers of his popular Carpe Diem blog about it. He recently published this chart showing the relationship of imports and employment. 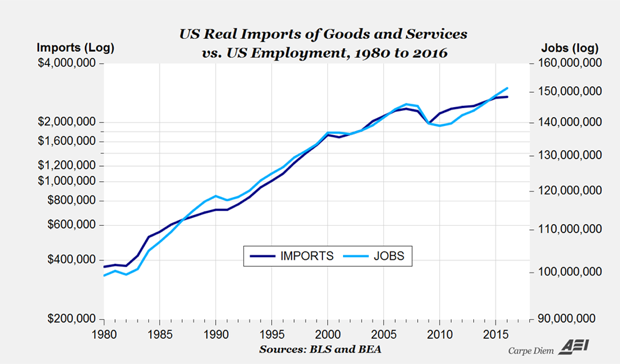 The misunderstanding of trade goes back centuries, and it’s only made worse by the arithmetic of GDP. One only needs to remind people of the trade surpluses of the Great Depression and that many economies have significant trade deficits and do very well, and some countries with great surpluses don’t… but in most cases it’s benign. It depends where the value added occurs, and there are many raw materials needed for that value creation that are not inside that particular country. If forced to grow coffee beans in North Dakota, there would be no Starbucks. One of my favorite columns is still that of Andy Kessler back in 2004 where there were complaints about Apple’s manufacturing overseas. “We Think, They Sweat” is one of the most practical explanations of trade and value creation.

But I think the economists are being way to theoretical and not dealing with some very practical aspects of trade, such as the bureaucracies that are encountered in both sides of the transactions. National Departments of State and Departments of Commerce can do all of the negotiating they wish, but the day-to-day aspects of trade still have to deal with local aspects of logistics and bureaucracy. “Slow walking” paperwork in relation to the transport and sale of goods is a common problem when there are uncomfortable feelings between countries or between political parties. The lack of common recognition for intellectual property laws and regulations are often sore points in trade, for example. The negotiators may agree, but those agreements may not be enforced at low levels. I like to think that the new negotiations about trade involve solving many of those and other bureaucratic issues. But stirring general sentiments against trade can only cause serious long-term economic problems. I hope it’s a negotiating ploy and a stump speech applause line, and not a deeply held belief.

Joe, great column. Good analysis is all about putting information in context.

Great article dr. Joe! It really shows the need for good and all encompassing data before making judgements.
This quote says it all: "So when you hear that e-books are declining, or print books are rising, or that LPs are returning, be sure to ask what data and segments and niches are included or excluded, and why those data seem so counter to other trends that are so obviously known."