Do You Know Where Your QR Codes Are?

When adding QR Codes to printed materials, it’s critical to understand where they are being placed (and whether they are even scannable) as much as it is why they are being used and the content to which viewers are being driven. Examples of where not to place QR Codes if you want people to scan them.

When you are talking to clients about adding QR Codes, do you focus on the content, the marketing goals, and the mechanics, or do you talk about the placement, as well? Here’s the reality: If the QR Codes are in the wrong place, the marketing, content, and mechanics are irrelevant.

For me, this issue was top of mind today when I saw a tractor trailer ahead of me with a QR Code on the back. Intrigued, I took out my phone to scan it. After all, it said, “Scan me” underneath. The problem, as I discovered, was that I couldn’t get close enough to the truck for the camera to focus. The QR Code was huge, and common sense would have that I should be able to scan it easily, even from a distance. But this isn’t about common sense. It’s about optics. A phone camera doesn’t see things the way the eye does. Through the lens, the code was way too small, and the vibration in the car way too great. Despite multiple tries, the camera was not able to read the code. All I got was angry pixilation all over my screen. 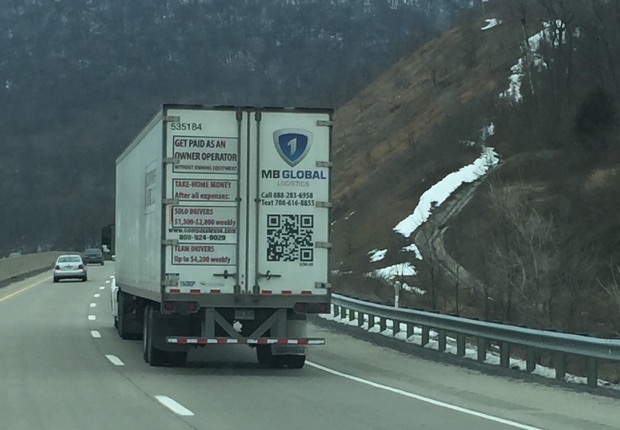 Clearly, the creators of the code at least considered the challenges of scanning from a moving vehicle. That’s why the QR Code was so huge. The idea was on track, but it appears that nobody actually tested it. To know whether it would work, someone would have had to print out QR Code, put it on the back a tractor trailer, and then drive behind it at highway speeds to see if it worked. It doesn’t appear that anyone did that.

Here are some other examples of “What were they thinking?” placements of QR Codes:

The takeaway? Encourage your clients to really think about the “where,” not just the “what.” Of course it’s make or break to know what marketing goal the codes are intended to accomplish and what content to use on the back end to do it. But if the target audience cannot scan the codes in the first place, then your clients won’t get off the starting block.

Think before you place!