By Dr. Joe Webb Published: March 18, 2015
Public relations employment boomed from January 2014 to January 2015, up +9.2%, an increase of +5,000 workers. This sector has benefited from the shift from paid media like print and broadcast advertising to the broader range of public relations formats. Where PR was, in an overly simplistic sense, the systematic process of getting the attention of editors and writers and broadcasters (sometimes called "begging"), it has become a more proactive discipline, with a higher profile, and considerably more respect. PR professionals have been in the middle of the strategy and execution of social media, search engine optimization, content marketing, blogging, Tweeting, and numerous other direct-to-market methods. The total advertising agency industry, excluding the PR component, increased by only 2,000 workers. Graphic design employment was up +1,800 workers, or +3%. The combination of advertising segments and graphic design was up by +13,800 workers over the year, +2.6%. Printing industry employment continues to contract, down -5,800 (-1.3%) for the last 12 months. Since last month, however, employent rose, like the result of seasonal issues as January is normally a very weak month. But this may imply that printing shipments may be holding steady, continuing a trend since mid-2014. Advertising employment passed printing employment in mid-2013 for the first time in history. The major changes in media and communications markets are still playing out. Earlier this year, employment in in periodicals, where magazines are the greatest portion, fell below 100,000 for the first time since 1986, and were 95,600 in January, down -5% for the year. Direct mail advertising employment has been increasing recently, and added 2,000 workers over the last year, up +2%. (click chart to enlarge) 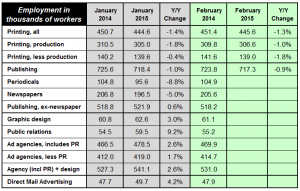