Unemployment Report Better, But Progress Slower than it Implies

The continuing story of this economic recovery is how many of the high-level data in the headlines is not what it really seems to be when you look at the underlying data. The explanation of the difference is too complex for the evening news, and even on the cable business channels the focus is on stock market indexes.

We have shown that many of the important data series have not confirmed the growth described by GDP. One is the revenues of the S&P500 stocks is still below its high. Median household income is about -7% lower than it was prior to the recession. The employment data has not confirmed a recovery.

First the good news, which is on a year-to-year basis. Since the unemployment report of February 2014...

Employment is a very mixed picture. Usually this unemployment level is considered to be close to "full employment." The Cleveland Fed chairman Mester has said that the labor market is nearly there. It is hard to believe that the Fed would consider it so when there are still significant employment market shortfalls. Assuming a modest increase in population (+0.8% per year; last year it was +1.1%), employment should be better. The data above are from the household survey, which is the source of the monthly unemployment rate. The business press tracks the number of workers on payrolls. That is above levels at the start of the recession, as noted in the chart below (click to enlarge). 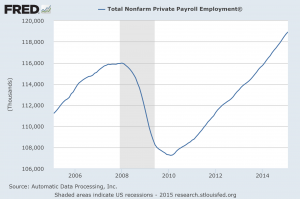 Though the chart looks very good (and it is very good that the direction is up, for sure), the recent payroll report of 118.9 million workers is actually 3.6 million workers short of where a population-adjusted figure from the start of the recession should be. There is a bias in general business reporting, and in government agencies, that payroll employment is better than self-employment. The household survey includes self-employment. People with two payroll jobs are counted twice in the payroll survey. Workers are counted just once in the household survey. This chart, based on the household survey, shows the number of full time workers (click to enlarge): 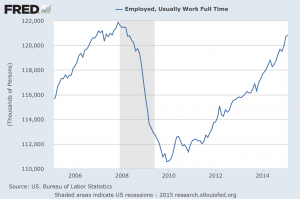 The number of full time workers is still -1.1 million less than it was at the start of the recession. Adjusted for population, it is -8.1 million short.

Last month's payroll report added +295,000 jobs. The household survey was just +96,000. This implies that a portion of self employed and freelance workers were shifted over to payroll jobs.

For the month, an additional 354,000 left the workforce. Had they stayed in the workforce, the unemployment rate would have been 5.8%, not 5.5%

The recession started more than seven years ago, and the employment markets have not returned to higher broad measures of that time. How will we know if things are improving at a better rate? The unemployment rate would actually rise. Most recoveries begin with about six months of worsening unemployment rates because workers flood the market faster than the market can absorb them, and then the unemployment rate drops sharply, confirming the recovery. This recovery, however, continues to be marked by improving unemployment rates with steady exits from the labor force. Is there a turnaround coming? Lately, many of the measures of the health of small business have been improving. The NFIB Small Business Optimism Index broke out above its sideways trend a few months ago. Even our own industry had a strong finish to 2014 compared to 2013. There is good reason to assume that the economy's growth will stay positive but below +2.5% in a long-term trend, but it seems that businesses have held off hiring as long as they could, and are now starting to slowly hire. The trickle will be bigger, but the floodgates will not burst open. # # #