In one way or another, making packages better vehicles for brand communication underlay most of the presentations at EskoWorld 2014, a user conference that drew more than 700 people to Orlando. Esko also used the occasion to launch Suite 14, a software collection that aims to provide a common interface for all participants in the package creation workflow.

Beer wasn’t the official theme of last month’s EskoWorld 2014 user conference, and neither was branding. But, beer enjoyed high visibility in two of the keynote presentations, and thoughts of branded packaging were never far from the technical sessions and workshops that brought more than 700 people to the four-day event at a Walt Disney World resort in Orlando, FL.

Esko, best known as a supplier of software and equipment for the design and production of packaging and labels, framed the conference agenda around Esko solutions that, in one way or another, make packages better vehicles for brand communication—a requirement that’s urgent for all packaged goods, and especially so for those that use no other means of brand communication except their packaging.

A number of the sessions took place in open labs equipped with computers and other resources for hands-on experiences with Esko products. About a dozen vendors of related solutions for packaging exhibited in a “partner zone” adjacent to the conference area.

Conference speakers emphasized the need to respond to changes sweeping the packaging supply chain at an ever-accelerating pace. Esko’s Bernard Zwaenepoel, for example, cited a European survey reporting that one-third of brand owners change their packaging in less than one year and that two-thirds change it in two. 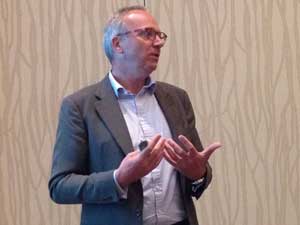 The desire to stay ahead of change explains Esko’s strategy of serving brands at nearly all points along their print, packaging, and supply and distribution chains, said Carsten Knudsen, CEO and president.  Continuously expanding the company’s portfolio of solutions is what prompts Esko to invest 8% of its operating margin in R&D—a percentage that Knudsen described as “a holy number for me.”

Knudsen said that although products aimed specifically at branding and brand management now make up only a relatively small share of the Esko’s business, the company’s offerings for these applications will grow. A new release, a software collection called Suite 14, moves in this direction by enabling brand owners to join the packaging creation workflow as contributors and collaborators.

Suite 14 premiered at the conference in a live demonstration that cast Esko employees in the roles of end-using customers: sales representatives, CSRs, graphic designers, marketers, CAD specialists, and other stakeholders in the chain of events that leads to the production of a finished package. The demo job, a cardboard carrier for a canned four-pack of Duvel beer, proceeded in real time from initial input of the specs to generation of a print-ready file. 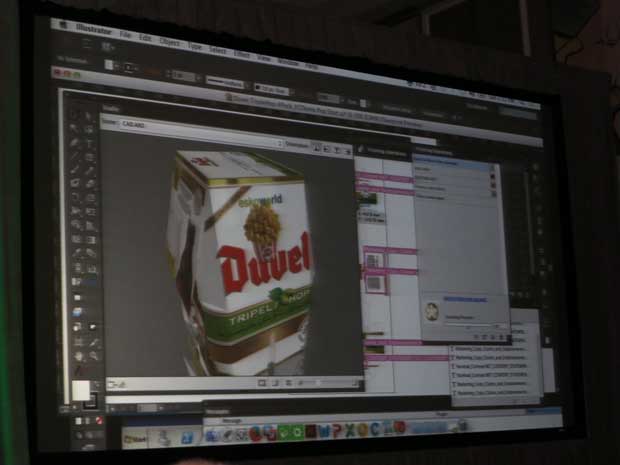 A packaging design takes shape in Suite 14, introduced at EskoWorld

The point of the demo, which was carried out before the full EskoWorld audience without any apparent glitches, was to depict how everything that takes place in the creation of package can be combined in a unified workflow open to input from everyone involved on the brand owner’s side as well as on the service provider’s. At each step of the process, participants were given appropriate permissions for the portions of the work they were authorized to do while the software continuously monitored everything for accuracy.

Suite 14 also provided HTML-5 based views of the evolving package template and automatically updated the job ticket as the project progressed from stage to stage. The modules WebCenter and Automation Engine Connect enabled the integration of helpful third-party products—for example, Adobe Illustrator and CHILI Publisher—with the Esko components of Suite 14.

The deep dive into Suite 14 set the stage for other equally detailed technical sessions to follow. These seminars addressed every key function of ArtiosCAD, Esko’s flagship packaging design software and one of the core components of Suite 14. Esko’s line of Kongsberg cutting tables and finishing systems had dedicated sessions, as did HD Flexo and Full HD Flexo, solutions that work with Esko’s CDI imaging units to make very high resolution flexographic plates for packaging applications. 3D design, color management, and wide-format prepress also had places on the EskoWorld seminar calendar.

Tying it all together from the brand owner’s point of view was a keynote presentation by Rob Wallace, a brand identity strategist and a managing partner at Wallace Church Inc. His remarks on the increasing “hyper customization” of branded packaging highlighted why the quest for quality, flexibility, and efficiency in packaging technology is endless. According to Wallace, the packaging market is changing in ways that have only begun to test the ingenuity of solution providers like Esko.

Hyper customization, he said, will mean “the death of branding as we know it” in a consumer product marketplace where a brand’s ability to spur individualized engagement is all-important. Ideally, “products speak directly to consumers through the lens of the brand.” But what we have instead, according to Wallace, is “a cacophony of noise” generated by the avalanche of brand messaging that consumers encounter in every retail environment.

Even as one-to-one brand experiences replace one-to-many brand messaging, consumers still will expect branded products to be the “most” emblematic of something: “most masculine,” “most feminine,” “most authentic,” etc. What’s needed, said Wallace,” is a “design algorithm” that can show what “most” looks like when it’s separately articulated for each consumer who wants to engage with the product.

Hyper customization lets the consumer self-select the brand experience—a phenomenon already occurring in “retailing 4.0” environments like Starbuck’s, where Wallace said customers have 87,000 different ways to buy made-to-order beverages. The consumer-driven hyper customization of the Starbuck’s brand can be equally transformative for other brands, he said. 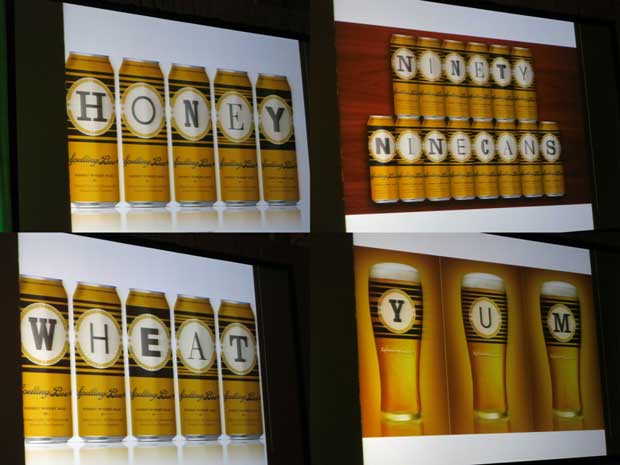 Wallace Church, a provider of brand identity strategies and design services to top consumer packaged goods companies, experimented with hyper customization in a project aimed at brand differentiation for craft-brewed beers. There are 900 such products in the U.S. today, said Wallace, but they all come to market with more or less the same kind of branding. Wallace Church thought the mold could be broken if consumers were given a way to create their own brand experiences based on usage occasions: the settings in which they bond with the brand as they imbibe the brew.

The answer was “Spelling Beer”: cans and other packaging variably printed with large letters that drinkers could arrange into beer-centric words and phrases. A honey wheat ale, for example, came in cans bearing the letters of the two key ingredients. In another batch, “Ninety Nine Cans” could be spelled out using 14 cans imprinted with those eight letters. An HP Indigo WS6600 narrow-web digital press was the printing platform for this quaffable typography, Wallace said.

The result was what he called “a completely connective experience” for those who have sampled the beer and played with the packaging. The testers also added a social media dimension by taking and posting “selfies” of their encounters with Spelling Beer.

Such is the experience that consumers increasingly will crave as they decide which brands speak most directly to them, Wallace said. He urged packaging designers, producers, and technology suppliers to make the appropriate investments in creating these experiences, avoiding “a race to the bottom” and to brand mediocrity in the name of cost savings.

I have seen Rob explain the Spelling Beer concept and it is a very interesting use of Data and Digital Print. I look forward to someone taking the concept to production.