Is augmented reality (AR) ready to explode onto the marketing scene? It’s already deeply embedded in enterprise applications, where it is being used to speed, simplify, and reduce errors in a wide variety of training, service, and maintenance operations. It’s important to be aware of these uses, since the more commonplace a crossover technology becomes in the workplace, the faster it will make its way into the consumer arena, and AR has become SOP for many enterprises.

If you want to know why augmented reality (AR) is ready to explode onto the marketing scene, just look at enterprise AR. It’s already being used for a wide variety of training, service, and maintenance applications, as well as industrial sales. AR is becoming normalized, and we know that the more commonplace a crossover technology becomes in the workplace, the faster it will make its way into the consumer arena. The level at which AR is being adopted in the enterprise may be more extensive than many people realize. In fact, it has become SOP for many enterprises.

Recently, I downloaded a white paper from PTC “When to Use What Kind of AR,” and it discusses four applications for which AR has become commonplace (at least in enterprises) and provides links to use cases from clients such as Toyota, Rockwell Automation, and Howden. All you have to do is read a few pages and the reality sinks in: This isn’t just about gaming anymore. These are real, daily-use applications that are solving problems in the business and manufacturing worlds. They are being used, not as some kind of “out there” solution only for the bleeding-edgers, but as a normal, everyday part of the routines of many large companies.

Here is a synopsis of the four areas covered by PTC.

(Note: this white paper is being used for ease of examples only. It is not intended as an endorsement or suggestion that printers should be offering or investing in these particular solutions.)

AR for Manufacturing: For national and international companies, manufacturing and technical expertise is often concentrated in a single location or several hubs, and the ability to troubleshoot, brainstorm, and collaborate across thousands of miles can be costly and inefficient. Traditional methods of knowledge sharing, such as video, are helpful, but have their limitations. Enter augmented reality for tasks such as remote assistance, troubleshooting, and inspections. 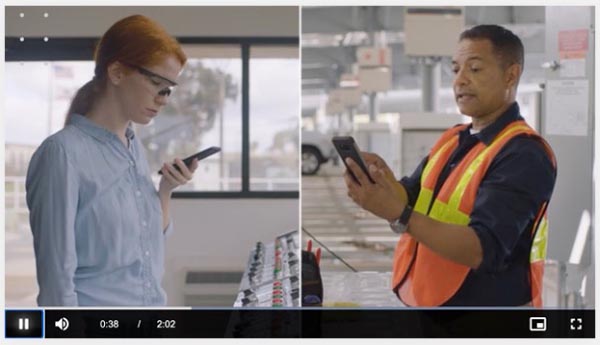 To create these applications, PTC offers Vuforia Chalk, its AR-powered remote assistance application that combines AR with real-time video to connect two people (such as a field technician and an off-site subject matter expert) who need to join forces. The field tech holds his or her phone up to the equipment needing repair, and that view is seen simultaneously by the expert on the other end. Both can use their fingers to draw arrows, circle components, and otherwise annotate the screen as if they were looking at the equipment in person. “What have you tried so far?” The field tech circles the knobs he or she has adjusted, and the annotations are visible to the expert. Now the expert says, “Okay, now try this.” He draws arrows or circles knobs visible on his screen, where they are also visible to the field tech, who then follows those instructions. Unlike simple screen sharing, the AR component enables both parties to annotate the screen in real time, then anchors those annotations to that location on the machine in case the tech needs to go back to them later. (See video.) 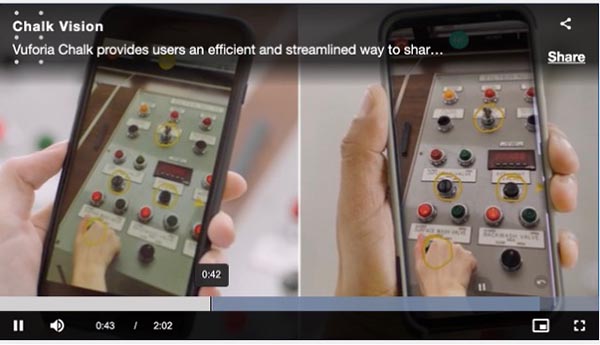 Driving this type of AR-driven collaboration is huge cost savings. It helps companies hit “key KPIs,” such as reducing waste, improving its first-time fix rate (FTFR), and decreasing its mean time to repair (MTTR). It also reduces mistakes and enables companies’ most experienced team members to support more techs in multiple locations, all on the same day. Used by companies such as Henkel, Toyota, Howden, BID Group, and Rockwell Automation.

Service: Anyone who has worked with Apple’s techs to do basic troubleshooting knows what a game-changer screen sharing is. Call the support line, the tech asks to share your screen, and—boom!— the tech looks at your screen, uses a little pointer to tell you to click here, click there, and the problem is solved. Think of AR for service as screen sharing on steroids. Instead of screen sharing, however, the employee wears a Microsoft HoloLens and engages with a mixed reality experience created in PTC’s Vuforia Studio that displays a 3D model of the equipment (called a “digital twin”) overlaid on the user’s real-life environment. This gives the user an enhanced view of the machine, including what is going on inside. On-site employees can respond to predictive maintenance alerts, rapidly identify parts, and access easy-to-follow repair sequences even when they, themselves, don’t have a high level of expertise.

Take the example of keeping the compressors running in a wastewater treatment plant. Front-line operators aren’t generally experts in compressor maintenance, so Howden, a global engineering business (and one of PTC’s case studies), uses Vuforia Studio to create mixed reality experiences that the operator accesses by wearing a HoloLens (see video) so that even inexperienced operators can solve complex issues. 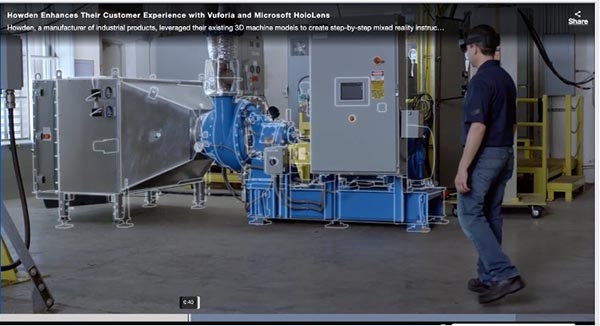 Training: The printing industry isn’t the only industry facing a workforce skills gap. Companies in a wide variety of verticals are using AR to reduce training time, especially when it comes to onboarding new hires. Rather than sitting in a classroom or requiring a trainer to travel from place to place, or even using a physical simulator, AR allows students to engage in immersive training experiences on site. Their own plant floor becomes the simulator, and a company’s own experts become the trainers. Using a product such as Vuforia’s Expert Capture, a company’s “tenured experts” can capture step-by-step procedures and best practices as they work, then transform those captures into reusable process documents, job aids, and training materials. (See video.) The trainee wears a headset, then in the 3D overlay, can see step-by-step instructions (“Step 1—turn this nozzle a half-step to the right”) created by the expert as he or she goes about doing the job. By using this solution, Rockwell Automation was able to reduce its training time by 50%.

Industrial Sales and Marketing: Selling industrial equipment isn’t like selling consumer products. The level of complexity is enormous, and AR experiences that use 3D and the “Internet of things” (IoT) can provide detailed product visualization to train sales teams and help potential buyers “see” a company’s equipment in their own environments. All of the same processes that help field service techs and front-line operators troubleshoot, service, and train on equipment can be used in the sales process, as well. Potential customers are able to interact with 3D models, including exploded internal views, without having to travel on location.

Of course, this just scratches the surface of the types of industrial (and commercial) applications for augmented reality. We are seeing its use in everything from product and architectural design to real estate tours. The point is to understand the extent to which AR is now being used by companies to solve everyday business challenges. The more commonplace it becomes, the faster it will make its way into the consumer sales and marketing arena.

What we are used to at work is what we expect at home, and augmented reality is no exception—so we all need to pay attention.