Looking for a Sustainable Printer That Walks the Walk

Ambika Anand Prokop is the author of Greenfeet Guides, a growing series of travel guides for parents who want to help their children more deeply and emotionally engage with cultures and landscapes around the world. She has also been on a sustainability journey that has led her to understand the value of evaluating printers based not just on their website claims, but on in-person conversations.

Not every client is as concerned about sustainable printing as Ambika Anand Prokop, author of the Greenfeet Guides, but she isn’t alone. As sustainability becomes increasingly important to customers, both in the B2C and B2B worlds, it’s worth taking a peek into her perspective.

Greenfeet Guides is a growing series of travel guides for parents who want to help their children more deeply and emotionally engage with cultures and landscapes around the world. But as the series name suggests, environmental sustainability is an important aspect of Anand Prokop’s mission, too.

As a mother, public school teacher, and former stream biologist, Anand Prokop has a passion for teaching kids, not only about culture, but about taking care of the natural world around them. Her first two books, “Cambodia Kids” and “Dubai—UAE Kids,” combine adventure stories with interactive activities to inspire learning and emotional connection. 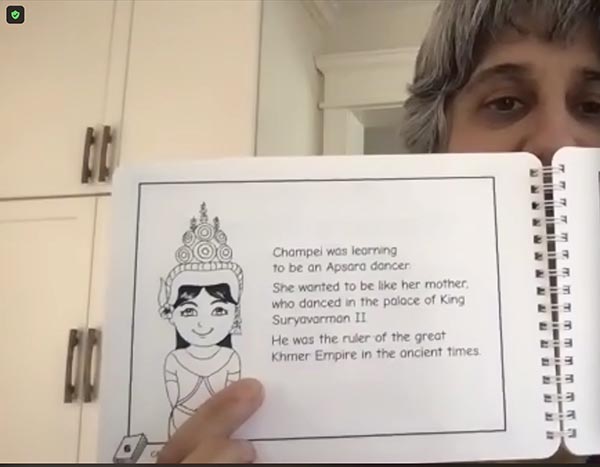 Ambika Anand Prokop shows off a page from one of her Greenfeet Guides, “Cambodia Kids.”

To be fully consistent with her mission, Anand Prokop prints her books with as small an environmental footprint as possible. But how to tell which printers are truly sustainable and which are just giving lip service? “There is a lot of greenwashing out there, with printers saying that they offer sustainable solutions without backing it up,” says Anand Prokop. “It’s hard to tell who’s who from their websites, since they are all claiming the same thing.”

This challenge was particularly acute when she lived in places such as Dubai and Singapore, where the availability of sustainable printing solutions were often limited. Anand Prokop was relieved to be back in the United States where more printers embrace that mission, but it was still a challenge to find one whose commitment matched her own. 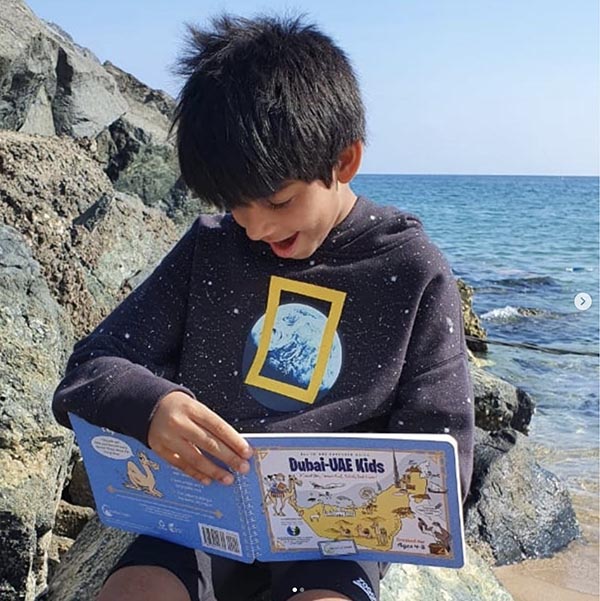 Then Anand Prokop’s neighbor introduced her to EcoPrint (Alexandria, Va.). She connected with Bobby Firestein, the company’s vice president of sustainability, and quickly noticed the difference in the sustainability printing conversation. “For example, the printers in Dubai told me they were eco-friendly because they offered paper with recycled content,” she says. “So I was surprised to learn that almost all paper nowadays contains some recycled content. This meant that what some printers were billing as ‘ecofriendly’ was actually just standard practice in the industry.”

She was also impressed that Firestein took the time to teach her about the environmental impacts of different printing processes and workflows, as well as the many other factors that go into sustainable printing. “For example, partnering with a larger parent corporation that uses renewable energy sources was not something that I would have thought to ask a printer about when I was living in Dubai,” says Anand Prokop. “It’s just not part of the industry parameters there yet.”

But while printing Greenfeet Guides in the United States provides important environmental benefits (including eliminating the carbon footprint of shipping the books from overseas), it increases her production costs. The books have a labor-intensive design, and with labor costs significantly higher in the United States than in Asia, maintaining the design and quality standard significantly increased the cost of production.

“I’m a small business,” she says. “I don’t produce thousands of copies of these books at a time, so it’s expensive to produce them in small volumes and in an environmentally friendly way.”

She appreciated Firestein working with her not only to lower the environmental footprint of her books, but to reduce their production costs, too. For example, because the books are designed to be handled and written in—essentially becoming game boards for kids—the covers need to be extra thick. Originally, that was accomplished by laminating two covers together, but in the United States, this became cost-prohibitive. So Firestein recommended a design change. Instead of gluing two covers together, he suggested using a fold-over structure. This eliminated the labor-intensive gluing procedure while providing the sturdiness Anand Prokop needed. It also allowed her to add an element of surprise. When opened, the interior fold of the cover now transforms into treasure map. Originally, the books were also designed to include a glued-on folder for stickers used in the interactive games. Firestein recommended replacing this with a bound-in sticker page, further reducing both the environmental impact and her costs.

“The team at EcoPrint has been bringing me ideas I’d never have thought of on my own,” says Anand Prokop.

This is where making an in-person visit to the shop to have those conversations and see the production facilities was critical to helping Anand Prokop make the decision to work with EcoPrint in the first place. From maintaining its own FSC certification, to investing in a variety of community programs that promote sustainable values (including planting a container garden in its company parking lot!), Anand Prokop found that sustainability is part of the company’s culture. “That’s why I always try to go visit the printing facilities in person,” she says. “You see things that you do not always see on the web page.”