Landa Digital Press Update: Crossover Points, Installed Base, and the Value of Being Anti-Fragile

Miss the “Landa Nanographic Printing in the Market” webinar on November 3? Here is a recap of Landa’s portion of the presentation, giving an update on its expansion, its installed base of users, and what it’s learned about the crossover points with offset.

Did you miss the WTT webinar “Landa Nanographic Printing In the Market” on November 3? If so, no sweat! Here is a recap of Landa’s portion of the presentation, giving an update on its expansion, its installed base, and what it’s learned about the crossover points with offset.

First, for those who may be unfamiliar with the distinctives of nanographic printing, the process uses billions of microscopic droplets (or nanoink) ejected onto a special heated image-conveyor blanket. Once landed, the droplets spread and blend together to create the final color image. As the drops spread, they lose their water and dry into an ultra-thin, fully dry polymer film that, according to Landa, bonds to any paper or plastic with no pre- or post-treatment required. The resulting ink layer is only 500 nm thick, the thinnest of any printing process, and because it never penetrates the substrate, it is 100% transferred each time, leaving no residual image on the blanket. Furthermore, because the ink layer is already dry, no additional drying is necessary. Sheets or film can be finished right off the press.

The webinar was hosted by David Zwang, printing industry consultant, who introduced Scott Brown, sales manager for Landa Digital Printing, who was invited to provide an update on the state of the company. As Brown discussed, we’ve come a long way from concept to beta to finally serial production of the S10 and S10P (perfecting) Nanographic Printing Presses.

The current challenges in the supply chain have also shined a brighter light on the importance of agility, Brown noted, which favors digital. “People are running low on packaging, marketing materials, and direct mail pieces,” he said. “Maybe they normally print 100,000 or more of a particular product, but now paper supply is tight. So they are keeping the supply chain moving with shorter quantities.”

Supply chain uncertainties and the need to adapt quickly, Brown said, has led to the emergence of the term “anti-fragile,” or the resilience and flexibility to adapt to change both quickly and profitably. From a capital investment perspective, this means choosing equipment that lets printers bridge gaps, capitalize on holes in the marketplace, and react quickly to changes as they arise.

To this end, Brown points to the Landa technology, which offers the benefits of digital production for short runs and personalization, while enabling printers to benefit from the flexibility inherent in their existing technology, including a wide range of stocks, with no need to pretreat, and the ability to use traditional offset coating systems. This frees printers from many traditional digital printing limitations and gives them increased flexibility in a market plagued by supply chain issues.

Brown also discussed the unique ink transfer process offered by Landa technology that results in incredible image clarity. “The we way transfer the ink results in an incredibly sharp dot, even when on recycled stock and kraft,” he said (see image below). He also notes the ability of the press to hit 96% of PMS colors.

This clarity, noted Zwang, comes from the evaporation of the water before the ink hits the media.  “With most digital printing technologies—for example, inkjet or UV—the drying comes after the fact,” he said. “By then, the water is already starting to absorb into the stock. In this case, you're evaporating the water before the hits the stock, which is why you're able to get [this level of clarity].”

Brown agreed, noting that this process is also the reason the Landa can accept the traditional offset stocks without pre- or post-treatment. 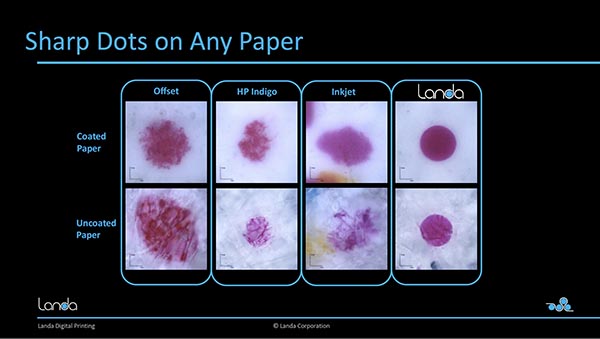 “But [while the two technologies are converging,] what seemed to be missing was that center piece of being able to have the sheet size that most printing companies utilize—that B1 40-in. sheet size—as well as the ability to run any stocks without pretreating and being able to finish in the same manner. In the development of the Landa, these were some of the key things we wanted to address,” Brown said. 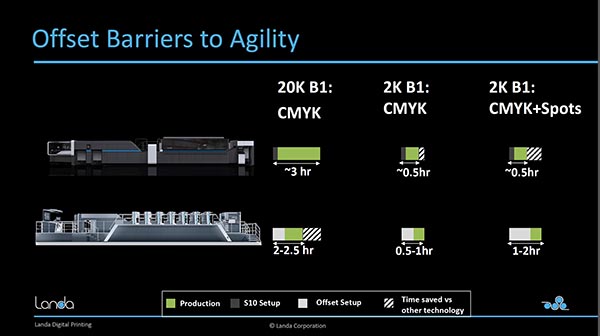 What's happening in practice, Brown added, is that Landa is seeing much longer runs on these presses for reasons not strictly based on makeready cost. “There might be other reasons, such as the impact of spot colors, the ability to collate a job and reduce the finishing time, or the ability to justify versioning they couldn’t before based on the elimination of plate changes and wash-ups.”

Zwang notes that, when it comes to replacing offset with digital technology, workflow benefits play a role, as well. “Crossover is a great starting point, but printers soon realize the value of using digital to optimize the production workflow and profitability in the rest of their plant,” he said. “Whether it’s pre-collating on the press or just being able to better manage their production schedules, digital begins to make sense. It’s the larger impact on productivity.”

This includes the financial benefit of shifting work from an offset to a digital press so that the offset press can be run most efficiently. This isn’t necessarily a one-to-one replacement issue, Brown explained, but rather a workflow management issue.

Brown pointed one of the Landa customers for which its Landa press now does the work of two offset presses. “The interesting part that is that the profitability of the jobs that are now going to the offset presses are higher because they're well suited for those longer runs and the jobs that are going on the Landa are more profitable because they are well suited for those digital style runs. This is something we're seeing in actual practical application with our customers, not in theoretical exercises.”

Brown concluded the technical portion of the webinar with a discussion of the recyclability benefits of Landa’s water-based inks. “We've had that tested, and the results were quite stunning, particularly compared to certain UV and other processes that involve more solids,” he said. “[As a further environmental benefit,] all of our ink is water-based, so our customers save on the cost of wash-ups and disposal.”

The remainder of the webinar was dedicated to customer installations, which I will cover in a future article. Stay tuned.

50 sheets is viable in offset, that's what the German online printer Saxoprint recently claimed.
That's a factor 100 different from what Landa Nano claims.

Saxoprint made this claim when announcing their investment in a second Heidelberg Speedmaster XL106 with fully automatic plate handling. With sharp competition in the online print market, I assume Saxoprint did do their homework before this investment and making such a bold claim. And, for the record, they also have decent digital equipment, they were the first to install a HP Indigo 100K, two years ago.

When looking at sales prices from online printers offering both digital and offset, the crossover seems to be around 150 to 250 sheets. And BTW, one of the printers I checked, owns a Landa S10P...

More (including link to Saxoprint claim, comparison of prices): https://www.insights4print.ceo/2022/09/the-crossover-between-digital-and-offset-printing/

Never forget that old technology fights back.
Only compare apples to apples: a recent digital press vs a recent offsetpress, not versus a decade old printing press.