Part 1 of a two-part series based on the WhatTheyThink webinar “Print Production Outlook: Tracking the Turning Points.” In Part 1, presenter German Sacristan of Keypoint Intelligence analyzes Keypoint and other industry data on the state of the industry’s growth and key turning points.

Earlier this month, What They Think hosted a webinar “Print Production Outlook: Tracking the Turning Points,” sponsored by Canon USA. In this informative event, German Sacristan, director, Print On Demand Service, Keypoint Intelligence, presented data from the company’s recent primary research. The data provided a snapshot of where the industry is today and where it sees itself going in the future. (To view the webinar, click here.)

This first of a two-article series looks at Sacristan’s analysis of the overall status of the marketplace. A subsequent post will look at his analysis of the top applications being produced in the industry today and those that are on the rise.

“Tracking the Turning Points” opened with moderator Richard Romano reminding us that, while the industry is currently experiencing growing pains from sea changes in technology (specifically, the continued hand-off from offset to multiple forms of digital), the industry is no stranger to such changes. Turning points have been with us since the days in which letterpress reigned and offset was the pernicious upstart. Today, those turning points include offset to toner digital, toner to inkjet, and offset directly to inkjet. “Each time there has been a turning point in our industry, people have raised concerns that the quality of the newcomer isn’t good enough and it will never take hold,” says Romano. “But each time, as the technology hasimproved (as technology inevitably does), it does take hold. Today, for an increasing number of people, digital—whether toner or inkjet—has simply become printing, and there isn’t a comparison anymore.”

Watch for the day, Romano concluded, in which people may even say, “’Offset is almost as good as inkjet.’ That is the trajectory we are on,” he said.

Romano set the stage by first reporting on the state of the industry overall. He cited data from Smithers forecasting a significant bounce-back from the recession of 2020. According to Smithers, the printing market is expected to reach $15.86 billion in 2021, a growth of nearly 20% over 2020. “Of course, the market fell between 2019 - 2020 by 24%, so as we claw back out of the recession, we’ll make up some of that loss, but we will probably not recoup the losses entirely,” noted Romano.

Most analog markets, he continued, are forecast to decline as inkjet takes more and more share. He pointed to other Smithers data showing overall sales of analog equipment declining at -1.9% CAGR for 2022–2026, largely due to declines in high-volume publication work, such as magazines, newspapers, catalogs, and directories.

“It’s all about run lengths,” he said. From 2015–2019, Smithers reports that circulation for magazines, catalogs, and newspapers fell significantly, largely due to consumer migration online. Meanwhile, advertising print revenues/volumes were expected to remain essentially static at 2020 levels. “This is the result of growth in shorter run, geo-targeted publications that allow brands and advertisers to more effectively targeted content.”

Romano then introduced Sacristan, who presented some Keypoint data. In the digital space, equipment sales are down, as well. Sacristan showed a chart comparing the CAGR in equipment sales from 2019–2020 to print volumes during the same period. While sales of both black-and-white and color equipment show nearly identical declines (CAGRs of -2.1% and -2.0%, respectively), black-and-white and color volumes showed growth over the same period. Black-and-white volumes showed CAGR of 1.2%, while color showed CAGR of 10.2%.

Much of this, he explained, is due to the increase in direct mail during the pandemic. Indeed, 75% of respondents to the Keypoint survey expected their volumes of direct mail to increase over the next two years. 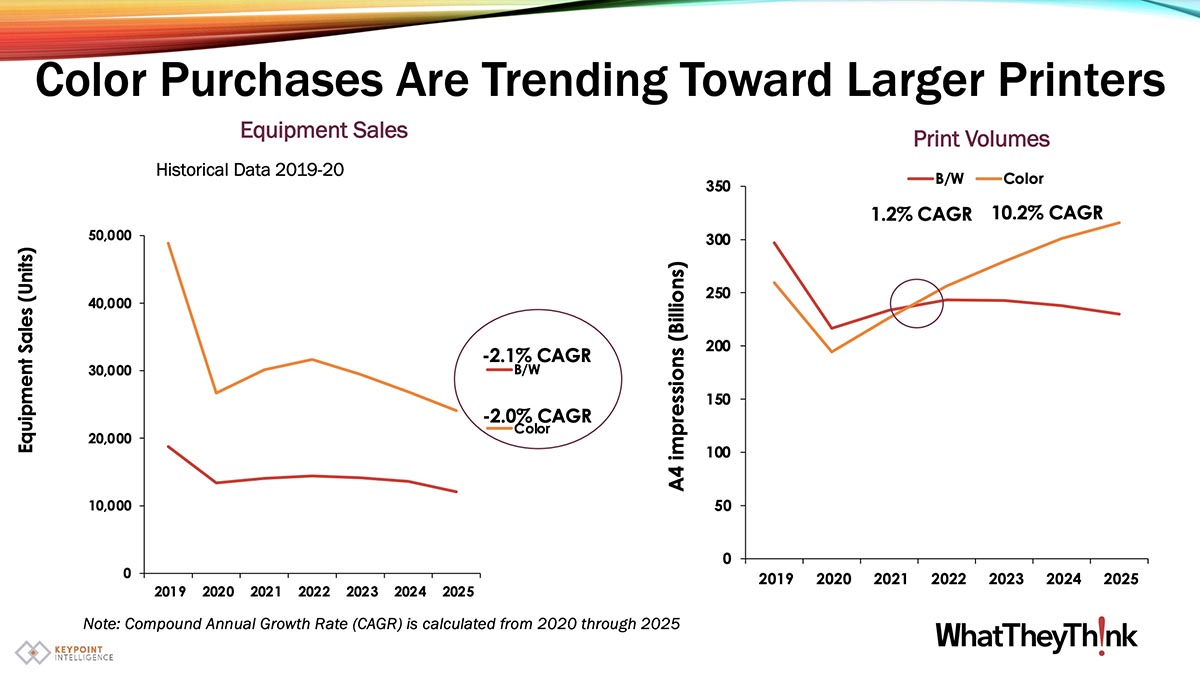 The declines in equipment sales have more to do with print volume consolidation, Sacristan explained—in particular, the consolidation from small MFPs to larger production inkjet cut-sheet and rollfed devices. In other words, the industry is producing higher volumes on fewer machines.

Next, Sacristan turned to Keypoint Intelligence research on the turning point of offset to digital. How much of the market is currently digital vs. offset? Sixty percent of survey respondents say their volume is a 50/50 split. Nearly half (48%) say that at least 60% of their work is digital. 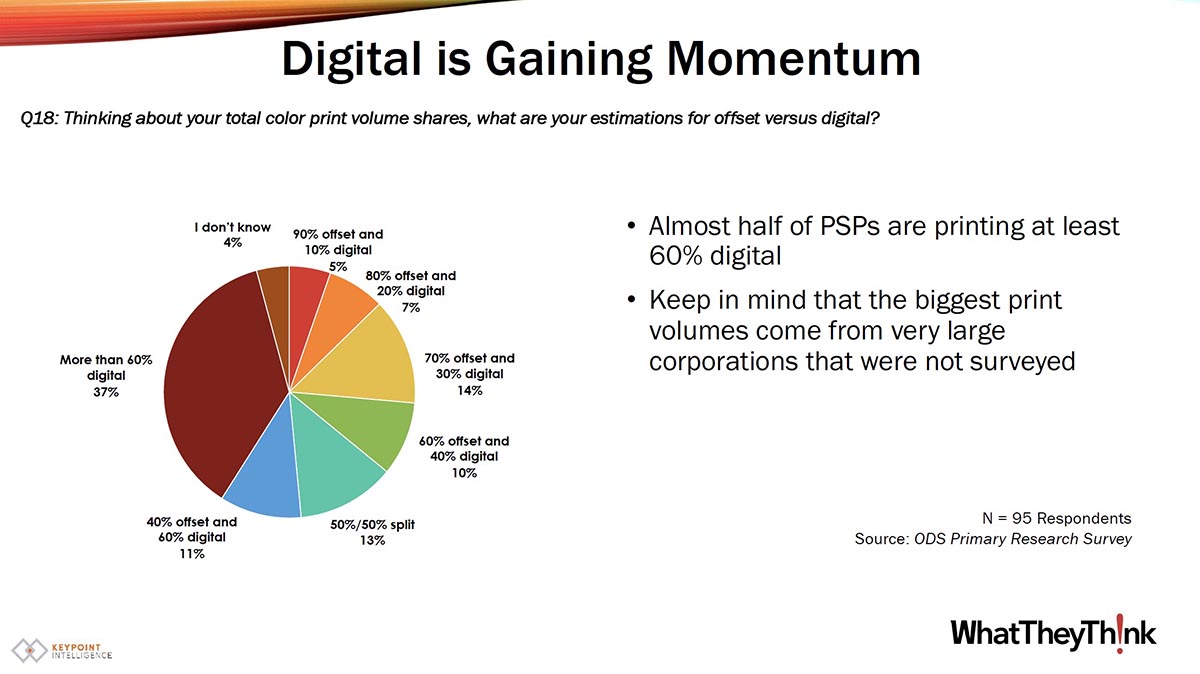 While these numbers might seem high, Sacristan explained that more than half of respondents were printers with annual sales less than $3.5 million. “Overall, market volumes are still primarily offset,” he said. “We see data that puts the overall market at around 15% digital production. The reason we don't see that here is that our panel did not include the big printing corporations or online printers. So this data is more representative of the average commercial printer. But it is interesting to see in the data what we already see in the marketplace—that many PSPs and commercial printers do more digital than offset.”

Sacristan added that nearly one in nine (86%) respondents expect that transition to continue. 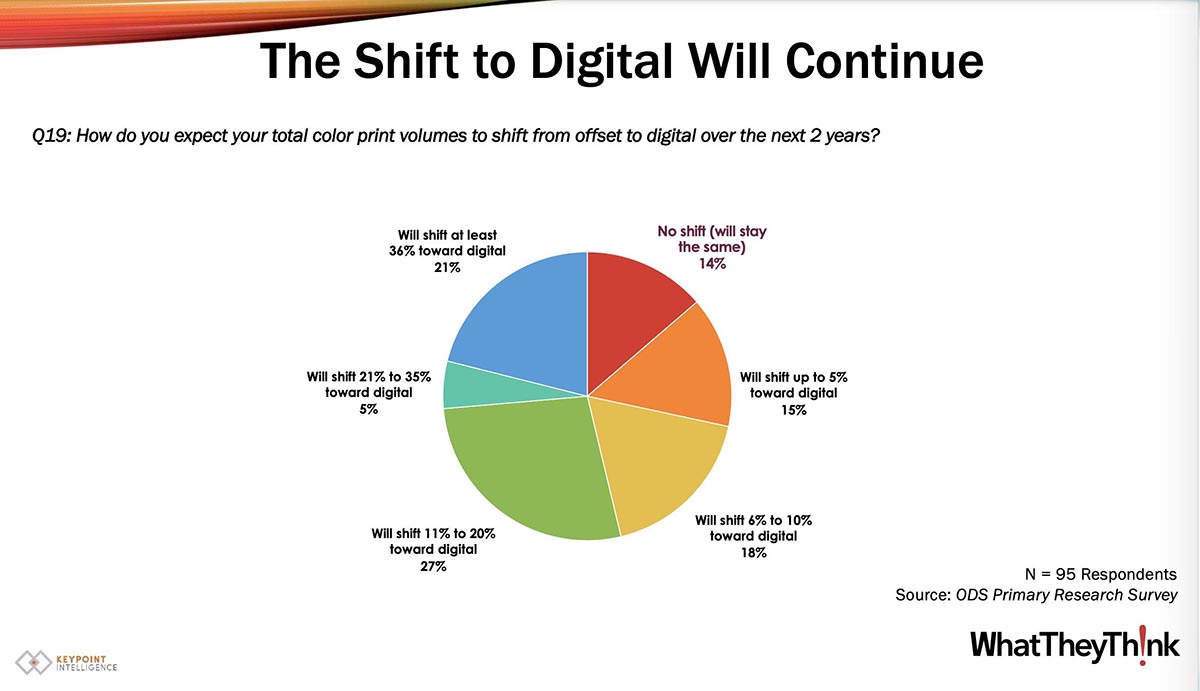 This, Sacristan said, is likely the result of the influence of high-speed inkjet. Indeed, Keypoint forecasts growth of toner at 4.7% CAGR between 2020- 2025, while inkjet is forecast to grow 13.6% CAGR during the same period.

But while some inkjet providers swear that the quality of inkjet can be even better than offset, Sacristan does not expect inkjet to replace toner completely. “Customers love the running cost and simplicity of inkjet, but toner is going to remain. Many simply don’t have the print volumes to justify it.”

In Part 2, we’ll look at the Keypoint data on toner vs. inkjet and the trends in key applications, such as direct mail, publications, and commercial, as well as touch on trends in packaging and labels and bespoke technologies.