Dr. Anthony Fauci’s trading card is the TOPPS Company’s best-selling card of all time—and a product of the ruthless efficiency of the company’s production workflow. What lessons are there for the rest of the industry?

Love Dr. Anthony Fauci? So do millions of Americans. In fact, as improbable as it might seem, the director of the National Institute of Allergy and Infectious Diseases and face of the medical community during the COVID-19 pandemic recently cemented his almost cult-like status, not as the nation’s top infectious disease expert, but as the face of TOPPS’ best-selling trading card of all time.

Wait, what? The all-time best-selling TOPPS trading card is not from a mega-star from the NBA, NFL, or MLB, but a scientist? What is this world coming to? Is science finally becoming cool? 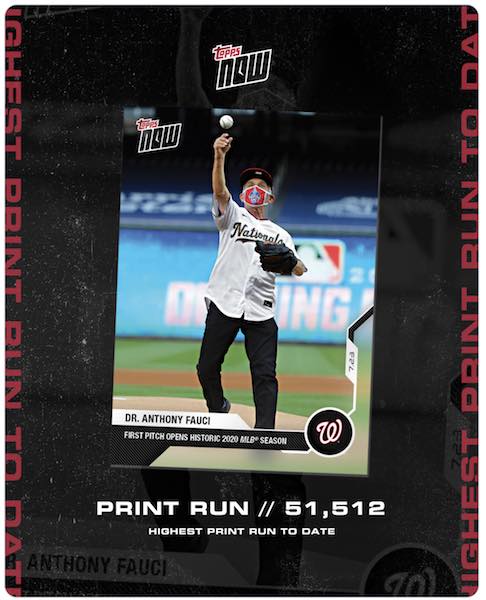 It just might be. A fully socially distanced Dr. Fauci, wearing a mask featuring Washington Nationals colors, was featured on a limited-edition trading card from TOPPS Now (the online ordering arm of the TOPPS Company) after throwing out the first pitch at the Washington Nationals’ 2020 season opener against the New York Yankees. The pitch, which was affectionately described as “abysmal,” hooked far to the left and landed nowhere near the catcher, endearing him all the more to the American trading card public.

TOPPS Now cards, which are designed to celebrate “the greatest moments in sports and entertainment...as they happen,” are sold for only 24 hours. The Fauci card became the bestselling card in the company’s history with more than 51,500 “Faucis” sold.

What the public doesn’t know is the complex workflow behind these cards that makes such “24 hours only” cards possible, especially at the retail price point of $9.99. It’s a fully automated front-end workflow (in TOPPS’ case, supported by Rex Three’s enterprise print management system and HYBRID Software’s CLOUDFLOW technology) in which the jobs are not touched until they come off the press.

This “touchless” workflow is critical since, at any given time, brand teams and their editors are planning and executing 50 TOPPS projects simultaneously. Activities from design through delivery—including digital asset management, web application development, and custom publishing—are managed in the TOPPS Card Factory, developed by Rex Three, which tracks the production status of approximately 20,000 pages at any given time output on one of its HP 12000, HP 7900, or Heidelberg XL 106 presses.

Mike Agness, executive vice president of HYBRID Software, whose productivity tools support Rex Three’s workflow on the production side, notes that such workflows wouldn’t be possible without the level of automation that, frankly, every commercial, packaging, and label printer should be striving for today. “You aren’t going to make money by throwing more employees at print jobs,” Agness argues. “Computers talking to computers and computers eliminating repetitive tasks—that’s where profitability gains are made. You have to eliminate as many human touches as possible.”

Agness recalls reading an article on APIs back in 2014 that still strikes a chord today. “The author pointed out that if you could buy the world’s fastest computer that couldn’t get on the Internet, would you buy it? The answer is no, of course not,” he says. “What use would it be? If I can’t get to where I want to be in the connected world, it’s of no value to me. That was in 2014, and even now—six years later—I would say that 90% of customers we walk into still don’t have an integrated solution to drive efficiencies successfully. There are too many stops.”

Agness points to another HYBRID Software client, which manufactures calendars, for which the first time a job is touched by a human being is also on press. “Our industry is sadly lagging behind in automation,” Agness muses. “Yet, end-to-end automation is not new to industry as a whole. It’s only new to ourindustry. Think about Amazon. You don’t think they are printing out job orders, do you? Of course not. Yet what happens in most print shops? As soon as an order is placed, someone prints out a job ticket.”

Plugging those holes, Agness says, doesn’t necessarily require an entirely new workflow. Many of these holes can be addressed with plug-ins and other productivity tools from companies like HYBRID. It’s just a matter of doing it.

“You don’t have the luxury of inefficiency today,” Agness concludes. “You just don’t.”