Gerhardshofen – WEILBURGER Graphics GmbH in the Franconian town of Gerhardshofen, a globally renowned coatings, adhesive and flexo inks manufacturer for the graphic industry celebrated its 140th anniversary from October 24th to 25th with a brilliant anniversary event.

More than 250 invited international guests followed the invitation of the company on the first day of the event to the new production halls in Gerhardshofen. These included international customers, distribution partners, politicians and representatives of the banking industry as well as cherished and partially retired friends and companions from over the last decades. Also, the owner families of the company Sahler/Grebe, the advisory board of the WEILBURGER Group as well as the management of the sister companies were also there for this occasion. And even a descendant of the Otto Stauber Lackfabrik founded in 1879, Mr. Gerhard Stauber, could be located and invited to the event with his family. The company was taken over by the WEILBURGER Group in 1978 and was renamed WEILBURGER Graphics GmbH.

In the midst of this year’s newly commissioned and probably world’s most modern production plant for water-based coatings for the graphic industry, the company created for this event a light-filled and futuristic event location which uniquely invited the guests to celebrate and also offered extensive spaces for dining, networking and relaxation.

After the official opening of the event, moderator Christiane Imdahl skillfully guided the audience from the gallery through a panel discussion about the company’s development and new production plant. Participants were Günter Korbacher Managing Director at WEILBURGER Graphics GmbH, Dr. Jutta Richter, Technical Director at WEILBURGER Graphics GmbH, who was also responsible for the planning and implementation of the new production facility, Mr. Arno Dürr, Sales Director at WEILBURGER Graphics GmbH and Mr. Ralf Hohmann, Director and authorised officer at Hemmelrath Technologies GmbH, who was responsible for the technical realization and construction of the new production plant. For the international guests, all linguistic content was simultaneously translated by professional interpreters and transmitted via headset. 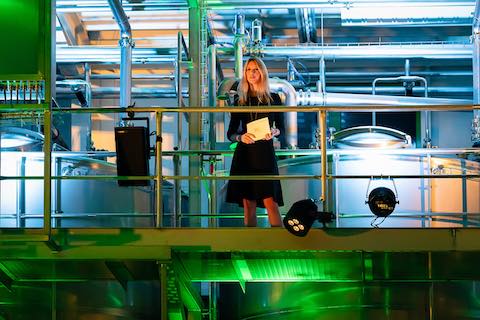 As special live acts, the very successful A Cappella Band VIVA VOCE was won for the first day of the event and for the second day the young and award-winning band SOPHIA. Between the acts, a DJ provided musical entertainment and invited the audience to dance until the early hours of the morning.

The second day of the anniversary event was then fully in the sign of the employees of the company and their families with the same quality and utmost vigor of all involved.

Günter Korbacher, Managing Director at WEILBURGER Graphics GmbH to the successful anniversary event: “At first, we were not sure whether we should actually organize such an event in our production hall and therefore had a long discussion period in the planning phase with all those involved in the implementation of the event. Of course, we now know that the decision was the right one and that we could not have found a more authentic, impressive and memorable location. I would like to take this opportunity to thank all persons and companies involved in the implementation of the event - especially the event agency project c - most sincerely for the highly professional and successful implementation. The extraordinary flexibility and engagement of project c has enabled that the production could be maintained to a large extent during the event. This was important for us due to our very good order situation.”