Landsprent ehf prepares itself for the future

One of the largest newspaper printing houses in Iceland, Landsprent ehf, has decided to bring its Commander press from Koenig & Bauer into line with the latest state of the art. Landsprent General Manager Gudbrandur Magnússon: “We have already enjoyed a close and trustful relationship with Koenig & Bauer for a very long time. And it was together that we developed the project of a step-by-step retrofit for our press.”

The process began with successive overhauls of the reelstands. This stage of the project was completed successfully earlier in the year, and attention has now turned to an electrical retrofit for the folders. Technical measures to modernise the printing towers are set to follow in the coming years. “The customers appreciate our longstanding experience and our professional team. The retrofit enhances production reliability for the company, and the quality of its newspapers will also move up another notch,” says Michael Holzapfel, service manager at Koenig & Bauer Digital & Webfed. 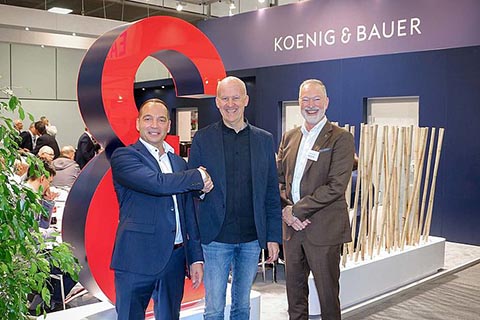 One of the largest printing houses in Iceland

Landsprent ehf, with offices in Reykjavik, can be counted among the country’s largest printing houses and is responsible for production of the Morgunblaðið, the most popular subscription newspaper on the island with a circulation of 30,000 copies. The overall product portfolio includes another 14 daily and weekly newspapers and magazines, and the company also prints various advertising supplements.