Gaez sought to overhaul its prepress workflow to meet customers’ requirements for repeatable print quality, shorter runs and faster deliveries. To remain competitive while regularly supplying up to 20 jobs per day, the company decided to replace its analogue exposure equipment with digitised, solventless computer-to-plate imaging and processing systems that offered stable production and greater automation.

Jesús Labarzana, technical director at Gaez, comments: “Our objective was to get results as close as possible to offset. We opted for SPGPrints’ variLEX CtP laser exposer because it had the versatility to image both flexo plates and screens at industry-leading resolutions of 5080dpi. Furthermore, the variLEX could be upgraded with UV-LED capability. The water-washable plates and processor also meet our sustainability criteria.”

With the variLEX imager’s multiple diodes, plates and screens are imaged in minutes. For flexo, an infrared laser ablates the black mask of the plate, which is mounted on a rotating vacuum drum. UV-exposure follows immediately after ablation. Neither film nor external exposure system are needed, saving manual input and space, and dramatically enhancing quality. Steep shoulders and flat top dots are made possible by the laser’s precision.

Rotary screen imaging is also a highly automated affair. The nickel RotaPlate screens used by Gaez – also supplied by SPGPrints – are mounted on a magnetic drum and the emulsion is subjected to direct UV-laser exposure. They are then removed, sprayed with water to remove residue, and are ready for the press. Sharp edges and clear text as small as 2-point size are achievable.

Rotary screen with flexo is an essential combination for Gaez’s cosmetics clientele, whose luxury brands require distinctive packaging to stand out in a crowded market where consumer decisions are made in a split second. As a result, distinguishing features including fine line detail, smooth tonal changes, rich opaque colours, metallic finishes, sensually appealing coatings and Braille dots have high importance.

Ricard Balart, managing director of Gaez comments: “To achieve this level of quality, our Nilpeter presses feature three rotary screen printing units, and almost all our jobs include at least two screen passes.”

With the Toray Dantex Rapidoflex M2 plate, Gaez achieves a tonal range from 0.5% to 99% at 200lpi, so that fine detail needed for perfume labels are finally attainable and cost-effective. The plate is processed with a Dugopa processor using only tap water at room temperature, avoiding dimensional deformation for greater plate stability. Washing and drying times are cut further, reducing the whole prepress workflow to one hour – a 75 per cent reduction compared with the previous analogue workflow.

The variLEX system has the versatility to work with different software packages, enabling Gaez to select Hybrid PACKZ PDF workflow software, a PDF editor for labels and packaging, for its high level of automation. 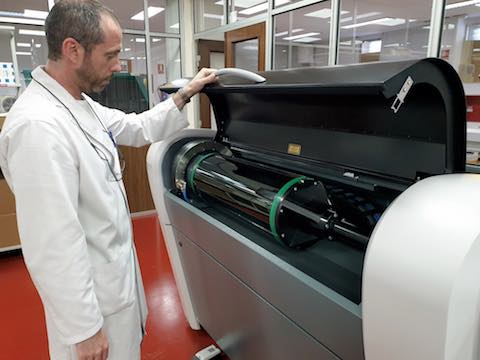