“Last July, we were replacing our roof when a rogue storm dropped seven inches of rain,” said Wisehaupt. “A 25-by-120 foot section of our building was affected and we had to replace the floor and equipment. There was significant damage in excess of $500,000.”

WhiteOak is a mostly digital operation, a far cry from their early days. Wisehaupt has been the company’s president since day one 35 years ago when it had one press and two employees. Today, it has separate printing and promotional product divisions and employs 50 people working from an 18,000 square-foot facility in downtown Lancaster.

“We are more digital oriented by design, about 70 percent compared to 30 percent offset,” remarked Wisehaupt. “In 2010, we made a decision to partner with other printers to print our 23 or 40-inch work. They produce it, we finish it, and this set-up has worked very well. We listen to what our customer wants, then determine the best situation for each job.”

Strength in numbers
He said WhiteOak is hitting on all cylinders since the new 45-inch PRISM was installed in October and the 36-inch PRISM followed three months later in January. But it required clearing a few hurdles and some behind-the-scenes work on behalf of Colter & Peterson staff and Jim Lundy at G.E. Richards to make it happen.

“Jim Lundy introduced us to C&P when we moved into our new building in 1995,” recalled Charlie Kurtz, WhiteOak‘s longtime production manager of 33 years. “After the storm, the 45-inch cutter dried out and we continued to use it. Our insurance company had hired an independent person to inspect the equipment and they deemed it was in workable condition.”

Going the extra distance for customers is always the goal for C&P and G.E. Richards. That’s why they got involved soon after the performance of the paper cutters began to wane.

“Jim and his staff are very good and knowledgeable,” added Wisehaupt. “The 45-inch cutter ran at first but by September, things didn’t seem right and we reached out to Jim and C&P. They proceeded to take the machine apart, discovered more water damage and determined it would not be safe to operate in the long run.”

“The 36-inch cutter,” said Kurtz, “was partially hit by the rainwater and was initially okay but it deteriorated over time. The insurance company agreed with the new findings and started the replacement process. C&P expedited things and delivered the new 45-inch PRISM here in a month. They were also helpful in reducing the price on the 36-inch PRISM so it would make sense to the insurance company.”

The good news is WhiteOak’s busy season just began and Kurtz said his operators are up to the challenge. “We are running five days a week, usually 15 hours a day. Our Indigo 7000 series printers are about to go around-the-clock, 24 hours a day until the end of June.”

“We do a lot of books for schools, in addition to other work for universities and colleges, banking institutions and non-profit organizations,” noted Wisehaupt. “We run a lot of direct mail pieces during this period, and then it will pick up again in early September and carry on through the end of the year.”

Almost all of the 13-by-19 inch jobs run on the Indigo get trimmed by the PRISM cutters. Kurtz said they also use a vintage, 36-inch Wohlenberg paper cutter from the 1970s that C&P extended its lifecycle by adding Microcut.

“Our jobs range from 50 to 50,000 runs. We’ll use the bigger cutter for the larger jobs and the 36-inch PRISM for the smaller work, but we really can use either cutter,” said Kurtz. “The accuracy is very good and the clamp pressure is pretty amazing, especially for our cover sheets. Our operators enjoy working with these paper cutters. We opted to stick with PRISM because we’ve always been happy with them. G.E. Richards and their technicians know what they are doing when it comes to servicing these machines, and they know them very well.” 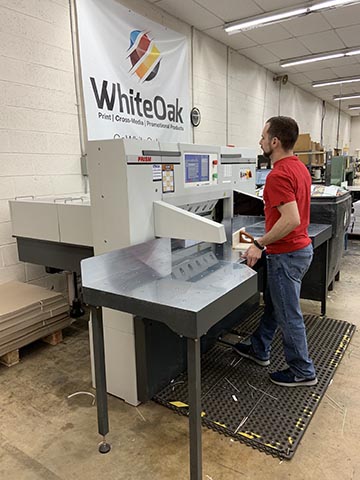