New York, N.Y. / Englewood, N.J. – Kornit Digital Americas announces the speaker lineup for its “Kornit Discover” event, available to registered attendees on either Wednesday, April 3 or Thursday, April 4 and taking place at the company’s Headquarters and Center of Excellence in Englewood, New Jersey. Englewood is only minutes from New York City.

The event coincides with the global debut of the Kornit Avalanche Poly Pro, the industry’s first digital direct-to-garment system built specifically for polyester and poly-blend substrates

Anthony Lilore, leader of RESTORE Clothing and a Cultural and Textile Arts Envoy representing the NYC Fashion Design community through the U.S. Department of State.

A panel discussion including industry influencers.

In addition to these speaking sessions, the event will include the global debut of Kornit Avalanche Poly Pro, the first digital direct-to-garment system built specifically for polyester and poly-blend substrates, a critical market given the increased popularity of non-cotton sportswear and athleisure apparel. Kornit Digital executives and product specialists will answer questions about the new technology, in addition to sharing best practices regarding the integration of this and other Kornit systems into a comprehensive print strategy.

“With the release of three HD print systems in 2018, and most recently the advanced, high-capacity Atlas system, Kornit has leapt to the front of the digital class,” says Shai Terem, president of Kornit Digital Americas. “This week, we’re staking our ground as the first DTG provider to master dark polyester and poly blends, shattering the boundaries between digital and a sports apparel and merchandise market that exceeded $100 billion last year in the U.S. alone. Our innovations in the field have attracted the attention of some of the most knowledgeable minds in apparel, and I encourage anyone to come and see the game-changing work we’re doing here in New Jersey.”

Those wishing to attend may register at www.kornit.com/lps/kornitdiscover/. 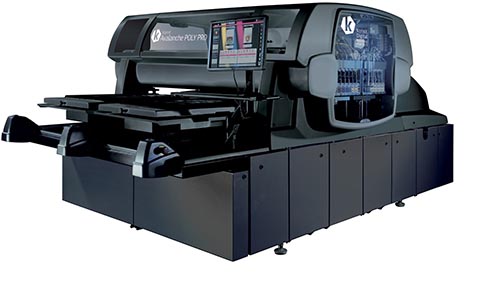