In the middle of March, Heidelberger Druckmaschinen AG (Heidelberg) and MK Masterwork (MK) presented the new Diana Go folder gluer for the growing packaging market at an open house event in MK’s European factory in Nové M?sto, Slovakia. Among the European packaging printers taking part were representatives from the companies that have already signed the first contracts for three serial production machines. The tour of Production and Assembly in Nové M?sto as well as the presentation of the Diana Go confirmed to the companies once again that their faith in MK and Heidelberg to deliver a machine that lives up to their expectations will be fully satisfied.

The Diana Go was developed on the basis of Heidelberg’s market requirements by the MK development team in Neuss, Germany, and offers both commercial and packaging printers a cost-effective, flexible, and productive entry-level machine with a comparatively small footprint. It can run a wide range of carton styles such as straightline and lockbottom as well as optionally special styles such as envelopes or CD covers. The Diana Go is able to hit a top speed of 250 m/min in a machine just over 9 meters long.

The optionally integrated glue, inspection, and ejector systems ensure high production quality. Designed for customers needing higher productivity and the ability to offer an expanded portfolio of products to their clients, the Diana Go is attractively priced to ensure a high return on investment in a very competitive market. As a result of technology transfer, the Diana Go has many design features present in the high-performance folder gluers of the Diana series to ensure reliable performance and peace of mind.

Constant investment in MK’s Nové M?sto site yields new models
Coming less than two years after the introduction of the successful Diana Easy, the new Diana Go has now been added to the portfolio of postpress machines. The new model completes the portfolio of folder gluer models developed and produced by MK and sold via Heidelberg. Service is also provided via Heidelberg. The portfolio now includes the Diana Go as a compact entry-level solution, the Diana Easy, a popular general purpose machine with more than 30 machines now sold in 18 months, the Diana Smart, a 450 meter/min workhorse, and the long established peak performance Diana X.

Successful cooperation between the two companies will result in a significant increase in production in Nové M?sto in the future
The Diana Go is the latest model to be produced in the Nové M?sto factory, which has a history of manufacturing equipment for packaging postpress applications going back more than 30 years. Located in Slovakia 120 km north east of Vienna, the site is perfectly located to supply customers not only in central Europe but also around the world.

The Nové M?sto site has delivered many hundreds of machines to the global packaging industry over the past thirty years. Originally established by one of the great names in the packaging industry, the Jagenberg company, the plant’s capacity was greatly increased by Heidelberg following its acquisition of the site in 2003. Operating under the MK Masterwork banner since 2016 with around 150 employees, the factory has undergone significant development. The production capacity has been doubled since then to handle the demand for the new Diana Go as well for the existing Diana ranges.

The success of the cooperation between Heidelberg and MK Masterwork is founded on the perfect fit between the two companies’ core strengths. MK Masterwork is the largest manufacturer of post-press equipment in the Asian region and has invested heavily in the manufacturing and R&D capacity needed to meet the demands of customers in the growing packaging market as the extensive development of the Nové M?sto site shows. With its global sales and service infrastructure, Heidelberg provides a worldwide distribution channel for MK Masterwork. 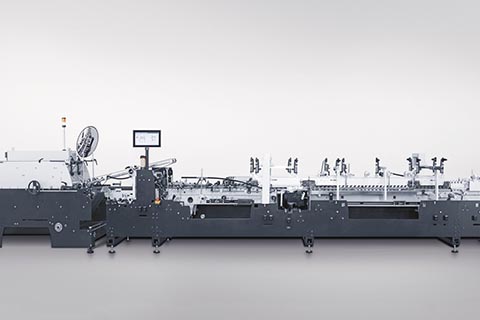 The Diana Go folder gluer offers both commercial and packaging printers a cost-effective, flexible, and productive entry-level machine with a small footprint.