EuroBLECH 2018: These Marking Systems Are as Intuitive to Operate as a Smartphone

The invention of the assembly line has made it possible to produce huge quantities of identical products at low prices. Today, however, the trend is moving towards individualised products – in the sheet metal processing industry as well. Small-batch production, with its frequent product changes, only works cost-effectively if machines and systems are networked with each other and can communicate barrier-free with employees.

“We want to contribute to the smooth exchange of information between devices, systems and people, which is becoming increasingly important in the Industry 4.0 era,” explains Christina Leibinger, Managing Director of Paul Leibinger GmbH & Co. KG, a manufacturer of industrial inkjet printers. The printers are used in the sheet metal working sector for marking sheet metal parts with flying ink drops without contact – with, for example, batch numbers, LOT numbers, type designations, company logos and 2D codes. “We invest a lot of energy so that our printers can flexibly integrate into production environments and can be operated without extensive training. This will make it easier for companies in the sheet metal working industry to enter the Industry 4.0 era.”

Models such as the JET3up, exhibited at the Euroblech 2018, feature a 10.4-inch colour touchscreen display with a Windows-based interface – a familiar interface for the PC user. In combination with easily understandable pictograms, the device can be operated as instinctively as a smartphone, with a finger, a pen, mouse or keyboard. 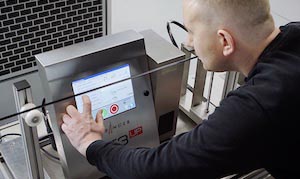 As intuitive as a smartphone: the JET3up features a 10.4-inch colour touchscreen display with a Windows-based interface

To further simplify operation, the display in the integrated font and graphics editor follows the so-called what-you-see-is-what-you-get (WYSIWG) principle. The printed image on the product corresponds 1:1 with the digital display. This makes time-consuming, nerve-racking placement experiments redundant.

Continuous Inkjet (CIJ) printers from Leibinger can also be quickly integrated into production infrastructures. From the outset, the company equips the marking systems with interfaces that customers would have to additionally purchase in the case of most competitive products. This has also been confirmed by beyerdynamic, a manufacturer of microphones and headphones based in Heilbronn, Germany, which uses the printers for coding components.

According to Ahmet Cakir, process engineer at beyerdynamic GmbH & Co. KG, data communication in both directions was one of the main reasons for choosing Leibinger. “We were able to find this feature on competing products, but with an extra charge. The Leibinger printer has the best value for money we have found on the market.”