Fujifilm Packages Up Another Jet Press 720S Deal in Germany

Based in Albstadt, southern Germany, Ebro Color is a modern, cardboard packaging print specialist with more than 90 years of history behind it. Founded in 1925, it has continually invested in new technologies over the years and now produces cardboard packaging and display units for a huge range of customers in a variety of sectors, from cosmetics, to food, jewellery and tourism.

Already something of a short-run specialist, offering run lengths as low as 25 units, the company has decided to give itself even more flexibility and lower its costs still further by making its first digital press investment. After a careful decision-making process, it has chosen to invest in the Fujifilm Jet Press 720S specifically for folding carton production, with the press set to go into operation in September 2018.

"Run lengths have been trending down for some time," says company CEO German Brodbeck. "We recently invested in a specialist offset press for short-run work and we've been very happy with it. However, as the trend continues and average run lengths get shorter still, we want to put ourselves in the best possible position to win new short run work and deliver it cost effectively.

"We were also seeing increased demand for personalisation and unique identifiers on printed products, so we knew this meant investing in digital, a first for us. We looked carefully at the market and attended demonstrations for a range of machines. In the end it was a combination of things that convinced us that the Jet Press was the right machine for us.

"First there was the quality. Nothing else quite matched up to it and we became convinced that it is at least as good as offset, perhaps even better. We talked to a few Jet Press users and the feedback we got from them regarding the quality was that it is at near-photographic levels and that customers often request that their work is printed on the Jet Press, even for longer runs where offset would be cheaper.

"The Jet Press users we spoke to were also very positive about the up-time which they said is reliably over 90%. We felt that the quality, combined with the reliability of the machine, represented excellent value for money and we also feel, based on our research into all the technology out there, that inkjet is the future.

"We see significant business growth opportunities ahead with this investment," concludes Brodbeck. "The Jet Press will give us the ability to offer ultra-short-run jobs (down to runs of one) both quickly and profitably, enabling us to produce high quality samples and prototypes, and to seriously target the end user market for the first time."

"The reputation of the Jet Press 720S as a packaging press has been steadily building for some time," says Dirk Mussenbrock, Business Development Manager, Inkjet Solutions at Fujifilm Graphic Systems, Europe. "We're delighted to see yet another print business recognise what it has to offer and we look forward to partnering with Ebro Color as they explore new markets and new business opportunities." 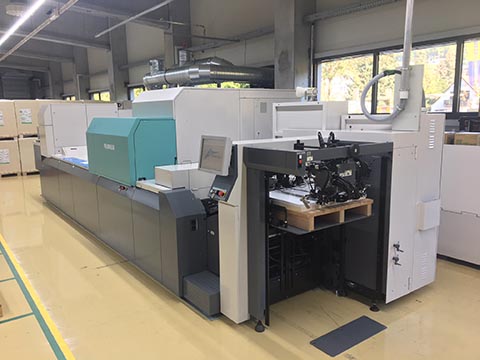