Clevedon, UK – Fourth-generation sign-writer Michelle Henry is set to leave her mark on an entire city, having built up Birmingham's HNS Signs into an award-winning business. Thanks to its combination of Roland digital printing systems and traditional sign-making techniques, the company's work has a highly recognisable style – which Michelle will now leave in the care of a new owner as she moves abroad.

Michelle says she was making signs from the age of four, but moved away from the industry to pursue other ambitions, until she found herself working at a sign shop in Australia.

"I fell back in love with it," she comments. "I find sign-making relaxing and therapeutic. And it's second nature to me, having been brought up around my grandparents' business, which they sold in around 2000."

"I'm gutted to say goodbye," she says. "The buyer has to be right, with a lot of creativity to match that of the HNS team."

This creativity is clear – including the investment in Roland systems, which was an innovative business decision on Michelle's part. In 2010, HNS Signs decided to move into larger premises, intending to share the 5,000sq ft building with another party. However, that company pulled out and the sign-maker had space to fill and rent to pay.

"I decided to invest in equipment which would enable us to move more work in house, increasing profit margins, so with a government grant I bought a Roland SOLJET Pro 4 XR-640 printer/cutter," she explains. "I had seen the machine at our existing print equipment dealer's premises and knew Roland had a great reputation."

On the XR-640, she comments: "I love how quick it is. It's so simple and produces great quality print – other companies' work doesn't have a patch on it.”

"The Roland also gives us more freedom and control over our work. For example, if we're printing wallpaper or a vehicle wrap and have to re-print a panel, we can do that immediately in-house with no delays from outsourcing."

Michelle notes that the addition of a Roland digital printer, plus a Roland plotter, means HNS Signs has the technology to upsell new products to existing customers. For example, the business can offer interior wallpaper to buyers of exterior signs.

Indeed, it's this fusion of traditional sign-making with Roland digital print-and-cut that has built a distinctive style for HNS Signs, and work that has won several awards. Its project for the Arcadian centre in Birmingham's Chinese Quarter earned both a FESPA Award and the Innovation Award at the BGSA British Sign Awards in 2017, and its signs for the refurbishment of Pennyblacks bar, at Birmingham's canal-side Mailbox complex, won the Craftsman Award at the 2014 BSGA Sign Awards. HNS Signs also undertook a stealth project to turn The Bulls Head into the Shelby family's pub The Garrison for the BBC's premier event of Peaky Blinders in just five days.

To speak to a Roland specialist about the Roland SOLJET Pro 4 XR-640s or any other solution from the extensive range, please visit www.rolanddg.co.uk. 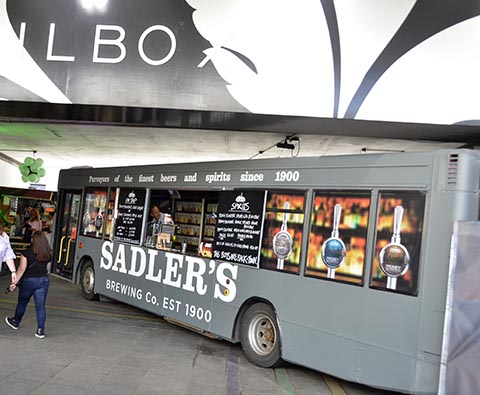