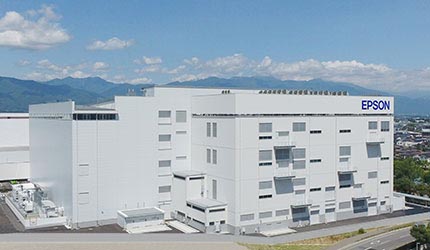 Tokyo, Japan – Seiko Epson Corporation has completed construction work on a new factory at its Hirooka Office in Shiojiri, Japan, that started in the autumn of 2016.

Under its Epson 25 Corporate Vision, Epson is targeting the office, commercial, and industrial printing markets. In FY2017, the company released high-speed linehead inkjet multifunction office printers as a major part of its strategy to drive future growth. Epson will expand sales of high-capacity ink tank printers, which have been driving near-term growth, in both advanced and emerging economies. In FY2018, Epson plans to sell 9.5 million units–a 1.7-million unit increase over FY2017.

In the commercial and industrial sectors, an accelerating shift from analog to digital solutions is expected to generate significant market growth for printers used for printing signage, textiles and product labels. Epson will continue to strengthen its lineup of commercial and industrial large-format printers, and will boost both its R&D and manufacturing capability.

The new factory will enable Epson to expand its presence in these markets in addition to bolstering its ability to handle an expected medium-range increase in demand for printheads. By leveraging its production capacity, Epson also plans to rollout sales of its PrecisionCore printheads for large-format printers worldwide, and work with its partners to accelerate the shift to digital in commercial and industrial printing.

The new factory will be the second production site for PrecisionCore print chips, which are currently manufactured at the Suwa Minami Plant in Nagano Prefecture, Japan. The structure, facilities, and equipment of the new factory boast excellent disaster resistance, thus reinforcing Epson's business continuity capabilities.

The new factory is also designed to achieve 20% higher space productivity than existing factories. It is equipped with a research and development function and will play a key role in improving printhead quality and productivity primarily through the development of production technology.

Epson is committed to inkjet innovation. By advancing its original technologies and providing products and services based on its unique core devices, the company seeks to lessen environmental impact through its efforts to expand the world of digital printing.