Princeton, N.J. – Virtual, remote connectivity has been proven to be a live saver for many companies and their employees as well as people all over the world during the COVID-19 pandemic. While not being a new concept, it became painstakingly clear how important it is to be digitally connected despite being physically apart. This same concept applies to ProImage’s NewsWayX workflow products where virtual, cloud-based HTML5 technology is at the center of its core capabilities. This feature is one of the main reasons, the Tribune Publishing Company decided in late summer last year, to install the NewsWayX Workflow System across all of their Six print sites (Chicago Tribune, IL, Hartford Courant, CT, Baltimore Sun, MD, Sun Sentinel, FL, Virginia Pilot, VA, and New York Daily News, NY).

Each of these Tribune Sites will have their own local workflow that includes servers, RIPs, Edition Planning, and output management to their individual, local CTP devices. But instead of upgrading their legacy workflow systems at each of those six print sites, the Tribune Publishing decided to centralize their production workflow at one cloud-based hub. This hub is integrated with Tribune’s own, pre-existing cloud where now each print site can log into ProImage’s central system and each manage their own production workflow - independent from each other. This central system - NewsWayX - is using HTML5 and is web browser-based enabling users to monitor production status from different print sites and from any location. HTML5 supports the building of more diverse and powerful web sites and applications - and in this case, allows newspaper production operators to access their NewsWayX workflow from anywhere. Staff can log in from different computers at work, in the production area, and even from their laptops at home to monitor and work on production flow.

With NewsWayX, edition planning is centralized so a layout file is imported and an edition plan is automatically created for each of the print sites. Centralized RIPs process PDF files and create soft proofs of pages and plates. Custom impositions are created for each site along with unique furniture, text, and barcodes that are burned onto the plate image. Ink presets are routed to the sites that require them. Another great benefit is that all print sites can take advantage of ProImage’s ECO ink optimization software that the Tribune already had for some of the print sites. However, by centralizing, all sites can now benefit from the improved image quality and reduced CMYK ink consumption that ECO provides.

To fully understand how this cloud-based system is implemented and performing for a large, multi-location publishing company like Tribune Publishing, we spoke to Jhon Marte, Director Technology Department Tribune Publishing that oversees the entire NewsWayX project from the IT-side. Tribune Publishing and their 6 print sites all had accumulated different workflow systems and different versions over the years. They were dealing with over 70 servers across those 6 print sites which is understandably a very difficult and time-consuming maintenance task. The goal was to implement a single, standardized application across the sites and with it reduce the number of servers. A centralized, cloud-based system for ad managers, rips, and OnColor ECO was needed that would allow a reduced footprint and uses a web browser so the system could monitor production from origination to print sites, regardless of their location. In addition, all sites needed to run on one, unified Windows Version - in this case, Windows 2016.

Once these project goals were established, Tribune Publishing investigated the market place for an ideal partner to put those goals into reality. Since they had implemented other ProImage products in the past and based on ProImage’s industry reputation and market leadership, it became apparent that ProImage with their cloud-based, HTML5 based NewsWayX Production Workflow System was the right partner. As Jhon Marte states: “We compared the product with those of other competitors and we found ProImage being very flexible, very user-friendly in the UI and it is a well-known product in the market. This and our previous working relationship helped us make this a fairly straight forward decision.”

As Jhon Marte explains, the primary NewsWayX workflow system is located in the cloud where all print sites are connected. In addition, there is another hub on the premises of their Chicago, IL data center with a duplicate set of licenses. This hub functions as a disaster recovery hub in case the primary hub fails or is not accessible. Files are copied to their DR (disaster recovery) system throughout the day each day so if needed it can become the primary hub with little to no loss of data.

When asked about the implementation of the system, Jhon states that it was an overall smooth process. Since Tribune Publishing with its multiple print sites is such a complex set-up, customization of ProImage’s system was needed on several occasions. Specific tables and particular integration with their press control systems were needed which ProImage’s software team custom developed for them. Each print site was moved over individually by migrating all of their products to the new system. Once that was done successfully, then they moved on to the next print site. The overall time frame for the implementation was set to about one year. It is important for the Tribune team to follow their own time-frame so they can ensure each site is moved over correctly and transitions without negatively affecting the user or production. Additionally, some sites require more integration work and development than others, so being diligent is key. According to Jhon Marte, ProImage and NewsWayX have been proven to be very flexible in allowing them to customize their systems for each site’s specific needs.

In regards to support, Tribune and ProImage are on a weekly conference call to discuss progress, pending issues, open items, and action items that are completed. This way, everybody is on the same page and things can get done efficiently. As Jhon Marte puts it: “It’s been very positive. From a technical perspective, the guys are knowledgeable of what they do, they are very dedicated and work with us on testing, and solving any issue that might come up.”

Since NewsWayX is a true web client interface, it is easy to follow and the learning curve was pretty shallow according to Jhon Marte. It has been very well received within the company and its sites. It is easier to use than what they had before and there hasn’t been a single pushback from the business perspective.

Nevertheless, as this seems a pretty quick and easy process, Joel Meyer, Production Director with the Sun Sentinel states that they casually looked at the system for 4 years. But when the time came and with it a lot of additional commercial work in the pipeline, they pulled the trigger within 90 days. The implementation phase for this first site took about 60 days. During the implementation, frequent conference calls and a good working relationship with the ProImage team helped to get the system implemented without having to have any physical ProImage support onsite. For Joel Meyer, ProImage was also the preferred vendor and for his specific print sites, he states that he sees an improvement in quality due to improved registration on press.

Ease of use and flexibility for Print Production

Besides the obvious benefit of a cloud-based based system and with it the independence from specific locations, NewsWayX also provides many benefits for the production staff. The brand new dashboard and Press Tree views increase efficiency and time savings. The dashboard presents a more efficient version handling as well as status tracking from the tree view. It was designed to save valuable time for the print plant managers and operatives and allows them to see the status of their entire production with a single view. Kurt Moody, Production Manager of the Sun-Sentinel in Florida can confirm this: “We can build our own custom dashboard and can see with a glance where our different jobs are, track the jobs from one process to the next and RIP the publication for plate output. What I really like, is we can have multiple tabs (for multiple jobs) open within NewsWayX and lay them out across our screen and have all the information right in front of us without having to scroll through different views and tabs - we basically can build our own custom dashboard!”

In addition, Kurt likes the flexibility he has with the cloud-based system: “I can log out on one computer and move to a different computer that’s closer to the imagers or even on my laptop, I can log in to NewsWayX and it opens up exactly the way I left it. I don’t have to rebuilt or re-open up anything again. In addition, there are tabs I keep open all the time - so wherever and whenever I log back into NewsWayX my work is there.”

Ray Chand, Senior Systems Analyst adds “The system is extremely flexible and likes the simplicity in design and automation it provides to each site. The additional features, enhanced planning wizard, ability to easy modify or configure workflows make it a very efficient system and the end user feedback has been fantastic.”

Another feature that facilitates the work of the production department is the ‘Normalization’ feature. When the file goes into their pre-existing templates it will scale - enlarge or reduce - to what the operator tells it to for that template. It cuts down on the overhead of templates and allows them to work with a very small quantity of templates which in return reduces the time it takes to set up a new job. With all the different accounts and jobs - 6 major newspapers alone plus many other newspapers and commercial accounts - they can reduce the templates to 2 for each publication. With a different system, they would have to work with 16 or more templates per account. As Kurt Moody states: “It is actually very easy for the user and minimizes chances of making a mistake and images not setting on the plate correctly.”

When asked about the learning curve, Kurt Moody states: “It was a very quick learning curve. We actually did remote training where Chicago gave us online access and just showed us around for 10 min. Since the system is very intuitive, we were all set right away. I have to say this is one of the cleanest output systems I have been working with - a very solid application.” This is from an industry veteran with 40+ years of newspaper production experience. 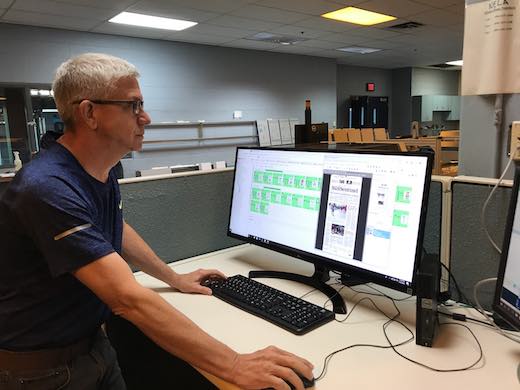