Kinna – In 2008 Suomalainen Lehtipaino, based in Kajaani in northern Finland, invested in a new printing press. A seven tower and two folders Tensor T400BE press with DCOS drive and control system was installed and substantially increased the color and pagination capacity compared to the Solna press it replaced. The press was originally equipped with Inventor Spray Dampening and Perretta Remote Inking and Register System.

In 2016 it was announced that Suomalainen Lehtipaino invests in additional automation as the Perretta closed-loop register system was replaced by a closed-loop Color, Register and Cut-off system from Dutch company QI Press Controls. The customer’s expectations were to increase the quality and obtain savings in ink and waste paper. The system was installed in the end of 2016.

“Starting at the end of 2018 we were in contact with Marja and her team discussing future retrofit needs and we could see that the efficiency and savings was not at a level we normally expect on a press with Closed-loop Color control. Start-up waste was almost doubled compared to equivalent DCOS installations. This encouraged us to investigate if there is a financial incitement to replace the new QI system with a DCOS system”, says Marcus Juselius, DCOS Agent in Finland.

A detailed ROI study was made and presented. This was followed up with two reference visits to demonstrate the DCOS Inspection system to highlight the differences. In late summer 2019 Suomalainen Lehtipaino decided to place the order with DCOS to replace the Closed-loop Inspection System.

The target for the investment was for the start-up waste to be almost halved, reduced by 47,5% with DCOS Technology. 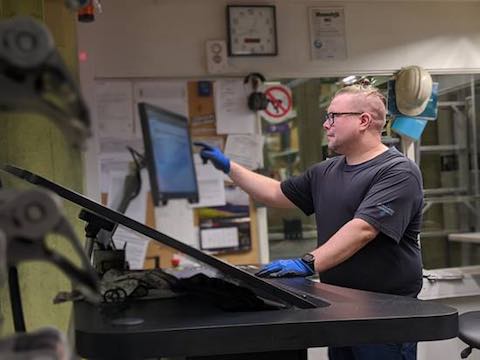 Jussi Talvi at Suomalainen Lehtipaino at the DCOS desk.

“We were thrilled about this opportunity. We know our technology is unrivaled when it comes to ROI and waste savings, we have seen this trend for years, but it’s always hard to compare different systems on different type of jobs, presses and pressrooms. Here we finally got a chance to compare apple-to-apple. Replacing the old system with the new and monitor the result.”, says Mattias Andersson, CEO and DCOS.

The QI Press control system was dismantled as the DCOS system was installed and commissioned in December 2019. The first full month waste report for January showed a 39% start-up waste reduction from the previous year and the start-up waste has continued to decline since.

Marja Niemi, Production Manager Suomalainen Lehtipaino says; “I have to admit it was not easy to make the decision to replace the system we installed in 2016, but the DCOS reference visits were very convincing and we felt confident the ROI was there. Today I´m very pleased to see the promises come through, resulting in savings for us. Additionally, our operators give me very positive feedback on a fully automatic and user-friendly system”.

This is DCOS's second Closed-Loop Inspection System installation in Finland.