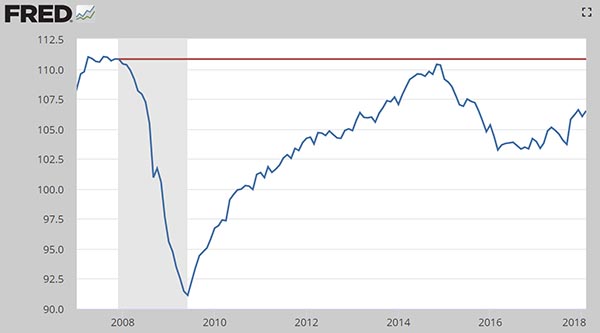 The Federal Reserve released revised industrial production (IP) data, reducing initial 2015–2017 IP in the range of about half a percentage point per year from the original reports. This means they were overestimating industrial activity during the period. What this means is that industrial production peaked sometime in 2014 and then slowed. That slowdown appears to have played a role in the economic uncertainty leading up to the November 2016 election as there was a disconnect with government reporting and what consumers and employees were actually experiencing. This is not uncommon, as we have often advised that the newest economic data are based on estimates and models that affirm recent trends, and often have a bias to the upside. Also, they tend to focus mainly on large businesses that report data frequently (such as weekly payroll reports) while small businesses may report data quarterly, with many reporting annually. This is why revisions based on actual data are so important to correct history, but also bring forecasting models back into line with realities.

Also affecting government data are demographic factors such as population. The chart below shows the Fed’s manufacturing series adjusted by the size of the civilian labor force. While recent economic data have been positive and encouraging, this measure has yet to reach the level it was at the beginning of the December 2007 recession. In this sense, manufacturing has never fully recovered from the recession. It is too early for the data to reflect changes in the tax law, but levels of business investment have been rising, which implies growth in the quarters ahead. The growth rate is unlikely to have a strong breakout to the upside, but at a milder +3–4% rate. When it will hit the December 2007 level is still many quarters away at current growth rates.