Initial Jobless Claims as a Percentage of the Workforce 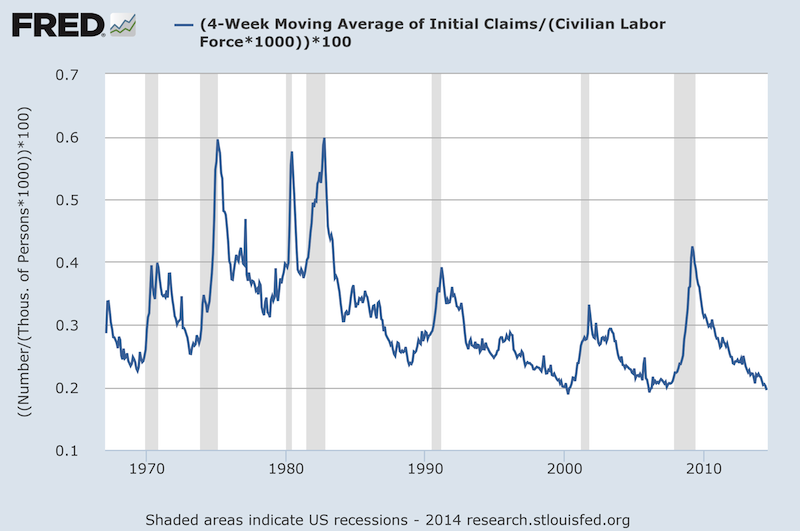 As the number of employed workers has been slowly increasing, and the total workforce has been growing, initial claims for unemployment have been decreasing. The historical perspective is very interesting. This past recession, as bad as it was, did not come close to the levels of the 1970s and 1980s recessions (about 0.6% of the workforce). This most recent recovery is already at the best levels of prior expansions. It doesn't feel “that good”; what's different? The workforce has not kept up with population growth, and about 2 million workers have permanently left the workforce. Also, companies have been cautious in their hiring, meaning, that there are fewer workers to dismiss when businesses of the past needed to. One could look at the chart and say that when this ratio reaches this current level (0.2%) a recession has always followed. Probably not in this case: this ratio may go to unprecedented lower levels because of the workforce exodus and the slow pace of hiring that has made this recovery so different than previous ones. Economist Mark Perry at the American Enterprise Institute discussed the steady rise in job openings at his blog. They are at a 13-year high (not adjusted for population growth), and still less than January 2000 by 800,000.