Around the Web: iPhone Airbags (no, not the users). April Fool’s Folly. In Praise of Jet Lag. 3D Color Matching. Screen Sharing Horror Stories. No eBooks for You. One Ruler to Rule Them All.

April Fool’s Day: some cautionary tales. Pantone’s color matching for 3D printing. Be careful when you share your screen. Repossessing eBooks. Gin and tonic toothpaste. All that and more in WhatTheyThink’s weekly miscellany.

German engineering student Phillip Frenzel has designed an ‘airbag’ for smartphones that protects your device if you drop it: it’s a case that releases metal prongs if it ‘senses’ that the phone is in free fall. https://t.co/eLIYRrfPRn

Monday was April 1, and here at WhatTheyThink, we embrace April Fool’s Day with something akin to glee. When someone bites and thinks a story is real, it’s even better. A cease-and-desist letter from a major national chain is also a highly coveted prize, and shows how high the steaks can be....

A good April Fool’s joke can be good for PR and marketing. Still, humor can be tough to navigate effectively, and, as a story over at Vox points out, when the brands themselves attempt such a prank, it doesn’t always go especially well, particularly in the age of social media.

If you travel with any regularity, the inevitable circadian rhythm disruption you know as jet lag is an occupational hazard, but new evidence suggests that it may actually be good for brain health—or at least it is if you’re a fruit fly.

But then maybe jet lag isn’t the real problem.

can't wait to apply a software update to my plane with a USB drive, the future rules https://t.co/RqT2g8X6Gl

Under terms of a new partnership agreement, Stratasys becomes the first 3D printing solutions provider with technology officially designated as PANTONE Validated™ - Both Stratasys J750™ and J735™ PolyJet™ 3D Printers are endorsed by Pantone as meeting the PANTONE Validated standards of color quality and realism. This is the second 3D-related announcement we have seen from Pantone, following its agreement with FiberForce Italy to bring professional color to 3D printing.

Ah, So That’s What it Is

A meeting involving three people in a conference room for two hours can raise carbon dioxide levels enough that you are cognitively impaired simply by being in the room. (source: https://t.co/2NbzeUmFOg)

We’ve all been there: you share your screen in a meeting or—even worse—during a big presentation and suddenly your private life is put, quite literally, on display. The New York Times shares some stories from the trenches.

This week, Microsoft announced that it was discontinuing its ebook store, as it was not making any money. The interesting wrinkle, says Boing Boing, is that, since those books were DRM-enabled, they are also repossessing those books that were actually purchased.

This puts the difference between DRM-locked media and unencumbered media into sharp contrast. I have bought a lot of MP3s over the years, thousands of them, and many of the retailers I purchased from are long gone, but I still have the MP3s. Likewise, I have bought many books from long-defunct booksellers and even defunct publishers, but I still own those books.

When I was a bookseller, nothing I could do would result in your losing the book that I sold you. If I regretted selling you a book, I didn't get to break into your house and steal it, even if I left you a cash refund for the price you paid.

So if you bought a Microsoft ebook of The Exorcist, it would be...repossessed.

One Ruler to Rule Them All

I present to you, my new universal fractional

The centimeter and millimeter sized divisions are labeled with fractional inch units. To get this fairly close, without going too large on my fractions, why limit yourself to powers of two for the denominators? This ruler takes full advantage of the full power of fractions by varying not just the numerator but also the denominator.

Maybe it’s just us, but that seems more confusing. 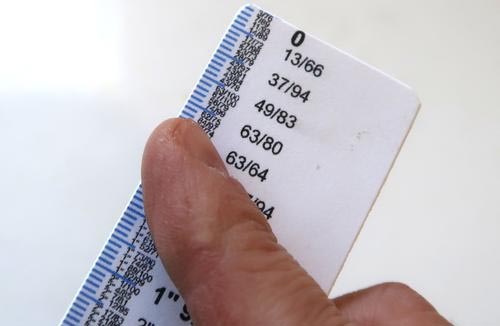 We’ll Drink to That

It was only a matter of time. Distressed to note that it doesn't specify if the gin has been hand-crafted in small batches by bearded artisans pic.twitter.com/ObZFUWmqvZ

1949: The Rodgers and Hammerstein musical South Pacificopens on Broadway; it would run for 1,925 performances and win 10 Tony Awards.