Cimpress, the corporate parent of Vistaprint, announced the acquisition of BuildASign, an online printing service that specializes in yard signs, banners, magnetic vehicle signs, and fabric banners. The acquired company includes the companion business EasyCanvasPrints, an online seller and producer of printed wall décor. Both the signage and the wall décor websites are perfectly aligned with the Cimpress strategy of “mass customization” of printed items served up online at the micro customer level. In a sure signal that Cimpress sees the consumer market as the next frontier of customized printed items, the emphasis in the official press release about the transaction is focused on the “fast-growth canvas-print wall décor” segment while “reinforcing the market position” in business signage.

The cash transaction values the BuildASign company at $280 million, a multiple of 2.17 times trailing twelve-month (TTM) revenue of $129 million. EBITDA of the acquired company was not disclosed; however, the multiple of EBITDA paid was described as consistent with the price Cimpress has paid for its past acquisitions. One analyst estimated the multiple paid for BuildASign at “high-single or low-double digits” times TTM EBITDA. The implication is that the acquired company was producing EBITDA somewhere in the range of 20% of revenues, at the upper end of performance for most print-centric companies. Cimpress itself trades on the public markets in the high-double digits, expressed as a multiple of EBITDA.

The acquisition is clearly strategic for Cimpress which can utilize its expertise in online customized printed products to further grow the sign and décor segments of its business. Cimpress also expects that the acquisition will not only be strategic but will also meet its minimum internal rate of return of 15% for M&A investments. For many companies in the printing industry, it’s difficult to understand the EBITDA and enterprise values achieved by BuildASign. In our view, the company achieved its high value because it incorporates three of the “five Ds” where we see higher valuations awarded within the commercial printing segments: the printing technology is Digital, the product is related to Display, and the company understands and implements the Distribution of the printed product. (The other two Ds driving value in commercial printing are Data and Design.) And finally, there is scale. While many companies have online customer-facing proprietary software, the BuildASign and EasyCanvasPrints websites, with in excess of $100 million in revenue, were a unique opportunity in what has become a “me-too” crowded online web-to-print space. Size of the seller and the opportunity to move the needle at Cimpress is another factor that likely led to a higher multiple being paid for the company.

We noted in the last Target Report that the wide-format industry is maturing and there have been a few bankruptcy filings in the segment. In our conversations with wide-format print providers, many have reported pricing pressure at the lower end of the product offerings (small signs, banners, etc.). Digital wide-format printing equipment is now more affordable and there is a considerable installed base of machines. Many commercial printing establishments now offer wide-format printing. The acquisition by Cimpress, a highly efficient provider, will only increase pricing pressure at the bottom of the market where cost and ease of ordering is more important than personal-touch service. The larger and more sophisticated wide-format providers are increasingly focused on providing value-added services such as image enhancement, image repurposing, onsite installation, and managing the logistics required for large campaign launches.

In the competitive online market for printed products, it’s no longer enough to be in the market with sophisticated customer-facing software, even if the revenues are significant. Publicly traded CafePress, listed on the Nasdaq, was acquired by online photobook provider Snapfish. CafePress, a legacy company from the dotcom era that offers personalized items such as coffee cups and T-shirts, is described by the founder as a “pioneer offering personalized and custom merchandise.” The CafePress website claims to offer over “one billion items crowdsourced from a global community of more than two million independent designers.” Impressive statistics, but nonetheless, with negative profit margins, declining revenues, and negative EBITDA, the company was valued in the sale to Snapfish at $25 million, or only 0.32 times TTM revenues of $78.5 million. Online software is nice, personalization is good, printed items are still in demand, but when it comes to enterprise value in the printing industry, growth and profits matter most.

New York-based Duggal Visual Solutions, a wide- and grand-format company that provides value-added services in the competitive high-end of the market, acquired NCG Visuals, also located in New York City. The acquired company was originally a commercial printing company and adapted to the competitive market by transforming into a print production firm with expertise in wide-format and environmental graphics.

Modern Litho, a regional serial acquirer of commercial printing companies headquartered in Jefferson, Mo., announced the acquisition of Trio Printing in St. Louis, Mo. The Trio Printing facility will cease operations and employees and production are moving to Modern’s existing facility in St. Louis. Modern established its presence in St. Louis when it acquired Midtown Printing in 2013, renamed as Modern Litho – St. Louis in 2014, and moved earlier this year into larger facilities. The company added a third hub to its multi-city strategy in July this year when it acquired James Printing, this time reaching westward to Kansas City, Mo.

Graphic Village, also a serial regional acquirer, announced the acquisition of CTS Packaging in Covington, Ky. The acquisition crosses state lines for the Cincinnati, Ohio-based Graphic Village and also crosses the bridge into folding carton production for the former commercial printing and marketing services provider company. The multi-state status won’t last long, as the company has announced plans to consolidate the folding carton production into its Ohio facility, north of Cincinnati. CTS Packaging is the second acquisition this year for Graphic Village, following on the announcement in February that the company had acquired Newport, Ky.-based commercial printing company Multi-Craft.

Quad/Graphics continued to add expertise outside its core competency of high-volume printing with the acquisition of Peppermint Warszawa, a creative agency in Warsaw, Poland. Company Chairman, President, and CEO Joel Quadracci stated “Quad can fulfill traditional agency functions, such as creative and media strategy, and campaign creation, while also providing integrated marketing execution across multiple channels.” That’s a mouthful, but also makes it clear that Quad is strategically using M&A to move upstream and create corporate value by adding design services (and one of GAA’s five Ds defining higher enterprise value in the commercial print segments). In March of this year, Quad acquired digital marketing services company Rise Interactive and in February of 2018 Quad took a major step in its transition with the acquisition of marketing production services and marketing execution company Ivie & Associates (see The Target Report – Turning a Big Ship – February 2014). 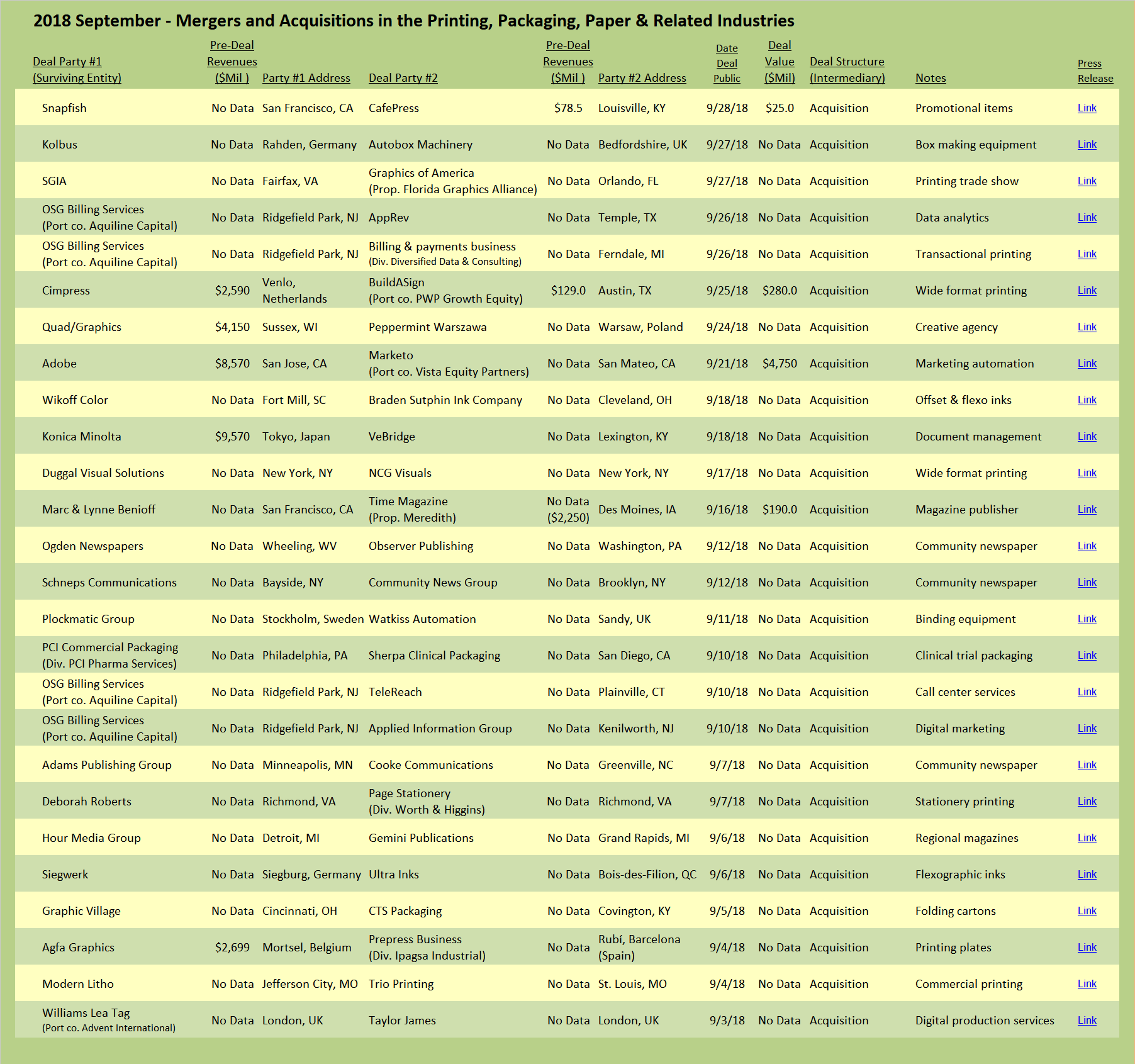