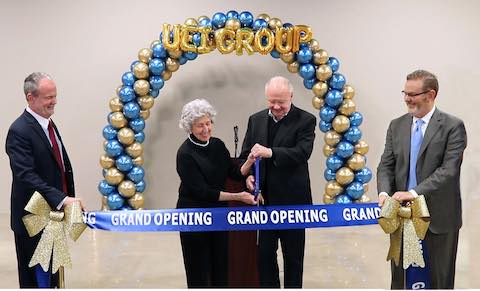 Kansas City – The UEI® Group companies recently unveiled their new World Headquarters, located at 9000 Nieman Road, Overland Park, Kansas, USA, in January of this year. To commemorate, the UEI® Group held an opening ceremony for their employees and local officials which concluded with a ribbon-cutting by Glenn and Sue Hutchison, the Chairman of the Board and his wife.

UEI® Group companies were founded with one company by Glenn E. Hutchison in 1971. Since then, the UEI family of companies has grown from a single company and a few employees to multiple companies, in various locations.

The new UEI® Group World Headquarters facility was scheduled, but completed in advance of the 50-year anniversary of the original UEI® company, Universal Lustre Leaf. Selecting the right facility and location was paramount. The ideal facility chosen for the UEI® Group World Headquarters was a former Sears building. The vision behind this new facility was a culmination of years of planning from concept to completion.

With the continued growth and expansion of the UEI® Group companies (Universal Engraving, Inc., UEI® Systems, UEI® Falcontec® and Infinity® Foils, Inc.), it became important to have a separate UEI® Group facility dedicated to the advancement and betterment of all UEI® Group companies. Under the guidance of an executive team, the new UEI® Group headquarters staff can better coordinate the global needs of all UEI businesses, their market developers and customers. The new facility also contains a premier Research and Development program focused on developing new products and processes for the foil stamping and embossing industries.

“We are thrilled with our new UEI® Group World Headquarters and the symbolism for which it stands and unites a unique group of companies for the betterment of the industries that they serve. You couldn’t ask for a better committed supplier than a UEI® Group company”, added Hutchison.

UEI® Group’s products are highly sought-after for their reliability, precision, artistic execution and innovative efficiencies. As industry leaders, UEI® Group’s product lines include patented products, many of which have provided significant advancements for the industries in which they are used.