Tokyo – Toppan Printing (Toppan), a global leader in communication, security, packaging, décor materials, and electronics solutions, has been commissioned by the Government of Japan’s Agency for Cultural Affairs with the FY2019 Japanese Culture Promotion Project, which aims to use state-of-the-art technologies to showcase the appeal of Japanese culture. As part of the project, Toppan will be screening video content presenting cultural resources unique to specific regions and installing touch panel displays enabling tourists to explore a wide range of information at Sendai International Airport, Hiroshima Airport, and Aso Kumamoto Airport from the end of September 2019 through March 2020.

The objective of the initiative is to use advanced technologies to demonstrate the charms and appeal of Japanese culture to foreign visitors. The cities of Sendai, Hiroshima, and Kumamoto have all been affected by natural disasters. Creating and displaying content based on the cultural resources of each region can help to raise awareness of them and contribute to recovery efforts. The project aims to increase consumption and stimulate the economies of the regions by encouraging foreign and domestic tourists to visit a range of destinations.

Toppan will be installing dynamic 4K video displays and touch panel screens in the three airports. The high-definition displays will show video content on the cultural resources of each region, including 4K video content from Toppan’s Meet Japan! library of more than 30,000 scenes of Japanese culture and customs. Large touch panel screens installed near the 4K displays will enable tourists to expand their knowledge of and interest in Japanese culture, get information on tourists spots and cultural properties on their smartphones by scanning QR codes, and find out how to get to where they want to go.

“We are now seeing increasing efforts to use VR, AR, and other leading-edge visual media to create digital archives and content on cultural heritage that promote an understanding of history, facilitate the use of new tourism resources, and contribute to regional revitalization by stimulating the interest of both local residents and foreign tourists,” said Masaki Asano, General Manager of VR Business Development at Toppan. “Toppan is very excited to be able to use its sophisticated technologies to support the Agency for Cultural Affairs’ project through video content production and display installations that provide realism and immersion.”

About the FY2019 Japanese Culture Promotion Project
The Government of Japan’s Agency for Cultural Affairs is undertaking a project in 2019, the first year of the Reiwa era, to promote the appeal of Japanese culture. The number of foreign visitors to Japan reached 30 million in 2018 and further increases are anticipated due to efforts to attract tourists to the various regions of the country. To enhance the experience of these tourists and encourage them to return to the regions that they have visited, the project targets the use of state-of-the-art technologies to showcase history, cultural properties, scenery, and other unique features of each region of Japan in effective locations, such as public facilities. The aim is to promote visits to tourists destinations, stimulate regional economies through increased consumption, and expand and reinforce tourism infrastructure in Japan.

As a core company in the project, Toppan will collaborate with Sendai International Airport, Hiroshima Airport, and Aso Kumamoto Airport and be responsible for planning, video content production, public relations, signage, back-office administration, and assessment of outcomes. 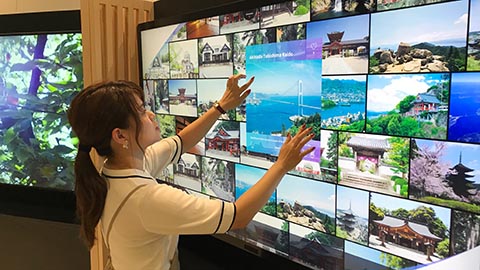