The high-speed cutting machine manufacturer from Hofheim has been pursuing its automated cutting vision for over 30 years. The trend that has been emerging in print shops for some years now is a significant increase in job changes coupled with a simultaneous decline in print runs. This has resulted in increased requirements regarding operation of the high-speed cutters.

Many companies are clearly feeling the effects of increased set-up times. Which is not surprising as many places have to process up to 30 different jobs every day. Manual creation of cutting programs for low-volume print runs is extremely time-consuming and the requirements applying to the creation of cutting programs have also increased. Combination sheets often require complicated cutting runs that involve numerous programming steps.

POLAR provides its innovative Compucut software solution to ensure that these increased set-up times can be eliminated.
Compucut uses common prepress file formats, i.e. the CIP3 and CIP4 standards (JDF/PPF). An optimum cutting program with the most efficient succession is created from this data.

This cutting program is sent to the networked high-speed cutter (PLUS & PRO HD models) afterwards. If a company is running several high-speed cutters, the program can be initially transferred to the External Memory Program Manager (ESPV) and then assigned to the relevant machine according to free capacity. As soon as the program is called up the machine automatically moves up to the first cutting block and onto the next cutting block after each cut. The graphical or real-time image of the printed sheet layout displayed on the machine clearly shows in which direction and in which sequence the sheet must be rotated.

Compucut Go is the basic version that can be used to create cutting programs for D or N PLUS machines. However, this version has some restrictions, i.e. it cannot display a real-time image. It is also not possible to modify the sheets.

Compucut Control includes the complete range of functions and these also include functions such as real-time image displaying and the option to manually modify the sheets.

The newest software version 5.0.8. is now available. This update focuses on Autoturn gripper coordination, which is the core of the PACE automatic cutting system. Also new: the option to program a "lint cut", which corrects any unclean cut edges through countercuts. 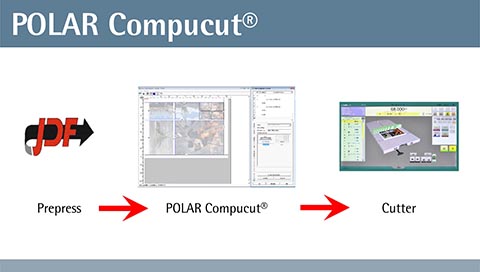