Triain Moldovan from Austria has won FESPA’s World Wrap Masters Series Final at FESPA Global Print Expo 2019, which took place from 14 to 17 May at Messe Munich in Germany.

Wrap Masters Europe took place on Tuesday 14 and Wednesday 15 May, when 30 competitors from 12 countries battled it out for a place in the Series Final. After an adrenalin fuelled two days, Casper Madsen from CWRAP//Colors in Denmark took the title of European Wrap Master, with Triain Moldovan from TM Wraps in Austria and Giovanni Rosas Linares from TopCar Performance in Mexico taking second and third place respectively.

On the last two days (Thursday 16 and Friday 17 May) Casper, Triain and Giovanni went on to compete against the winners of previous World Wrap Masters events: Wrap Masters Asia, Mexico and Eurasia, Speedwrap at FESPA Africa and Cambea at FESPA Brasil, as well as national wrap events in Denmark and Finland. The finalists were challenged with wrapping VW Golf cars and mannequins.

Triain commented on what winning meant to him: “I’m still in shock, I’m speechless, I don’t know what to say, I wasn’t expecting it. It was a tough and very close competition. To be able to compete against all of these wrappers is awesome. In this competition you have to deliver quality work under stress and it turns out today was a good day for me.”

The next event in the World Wrap Masters Series will take place at FESPA Mexico 2019 from 22 to 24 August at Centro Citibanamex in Mexico City. 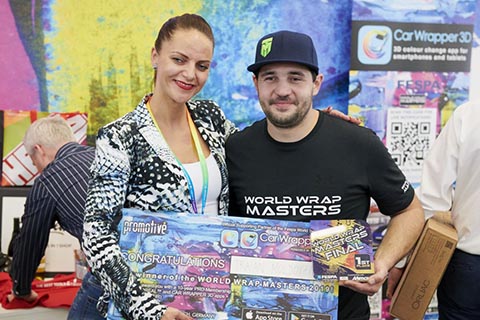