Alpha olefin sulfonates (AOS) market witnessed 2.4% year-on-year volume growth in 2018 over 2017, according to Fact.MR’s latest research. The study remains bullish on the potential rise in adoption of alpha olefin sulfonates as surfactants, owing to its eco-friendly and biodegradable nature. However, volatility in supply and price may hinder its adoption across various industries.

The ‘hydrophilic head and a hydrophobic tail’ structure of alpha olefin sulfonates make it difficult for end-users to maintain a high percentage of perfume oil in shampoos and shower gels without compromising their physical properties such as foaming properties and viscosity.

Alpha Olefin Sulfonates Witness over 63% Volume Sales in the Asia Pacific Region excluding Japan (APEJ)
The alpha olefin sulfonates market in the APEJ region is likely to outperform other regional markets with the ever-growing consumption of anionic surfactants in developing countries, such as China and India. The Fact.MR study predicts a 3% rise in sales of alpha olefin sulfonates in the APEJ region, in 2018 over 2017. The market in APEJ is likely to account for over 63% sales in 2018, creating more lucrative opportunities for market players in the upcoming years.

The study finds that the recent economic growth and ever-increasing trend of industrialization is triggering growth of surfactant-consuming applications, such as industrial cleaners and personal care products. The dominance of APEJ region in the alpha olefin sulfonates market is mainly attributed to a majority of market players investing heavily in the local markets to expand their surfactant facilities in the region. Growing applications of alpha olefin sulfonates in innovative personal care products and cleaners in the region are spurring the trend of innovations in the market.

Detergents and Liquid Soaps Industry Creates Maximum Demand for Alpha Olefin Sulfonates
The study report opines that the detergents and liquid soaps segment will account for more than half the sales of alpha olefin sulfonates across the world, by 2018. A majority of liquid detergent and liquid soap manufacturing companies are adopting alpha olefin sulfonates as a third generation surfactant owing to its excellent emulsification and foaming properties.

The insights presented here are from a research study on Alpha Olefin Sulfonates (AOS) Market by Fact.MR
https://www.factmr.com/report/591/alpha-olefin-sulfonate-market. 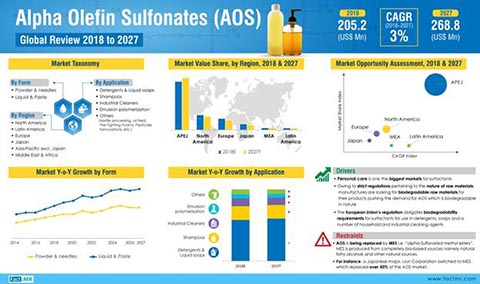