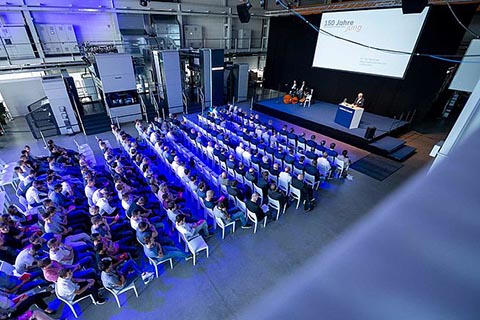 Recognition of the vocational school's long history: 200 special guests, employees and trainees attend the anniversary ceremony on 6 July 2018 in the Koenig & Bauer demo centre in Würzburg.

Some 200 guests, staff and pupils celebrated the 150th anniversary of the Koenig & Bauer on-site vocational school in Würzburg on 6 July 2018. Initially founded to train Franconian winegrowers to work in the factory, today the school is the company’s modern “talent factory”. The close link between theory and practice was a successful model that made history: in 1868 Koenig & Bauer set up the world's first in-house vocational school to establish dual apprenticeships long before state vocational schools took off. “As a new-generation teaching facility, today the vocational training school prepares tomorrow’s skilled workers for the challenges of a digitalised world,” says Claus Bolza-Schünemann, president and CEO of Koenig & Bauer at the ceremony in Würzburg.

A vocational school steeped in tradition

When Friedrich Koenig and Andreas Bauer, the two company founders, set up a printing press factory in Oberzell Monastery at the beginning of the 19th century, the region around Würzburg was mainly characterised by winegrowing. There was a distinct lack of suitable factory workers to put a modern division of labour into practice in the industrial sense. The logical consequence for Friedrich Koenig, son of the founder’s father, was to establish a factory training school, the first of its kind in the world. Apart from a few interruptions during the two world wars, Koenig & Bauer has since trained future young skilled workers in a wide variety of crafts and technical professions. Since its foundation on July 2, 1868, well over 7,000 people have taken the first steps in their professional careers at the vocational school. In its anniversary year, it is responsible for the qualification of 120 apprentices.

Dr Paul Beinhofer, district president of Lower Franconia, praised the special commitment to the creation and development of the company’s own vocational training school, which has been “supported and enriched by the company management’s social and humanitarian responsibility for more than 150 years”. The vocational school is one of several social innovations which show that Koenig & Bauer was well ahead of the times in the 19th century. It has been a state-approved private school under the supervision of the government of Lower Franconia since 1993. It currently trains apprentices in foundry mechanics, industrial mechanics, mechanical design engineering, electromechanics and metalworking.

Furthermore, in cooperation with the Baden-Württemberg Cooperative State University, the Koenig & Bauer vocational school also supports students of dual bachelor degree programs in the fields of electrical engineering, mechanical engineering and mechatronics. With a 100 per cent takeover rate, Koenig & Bauer underlines the quality of its own talent forge and secures the next generation of skilled workers in the region. “Company loyalty is an important factor of social interaction in our economy and stabilizes quality of life in our society,” Beinhofer emphasises.

Against the background of the rising trend of unfilled apprenticeship places, Dr Eberhard Sasse, president of the Bavarian Chamber of Industry and Commerce (BIHK), emphasised the development and career opportunities of young people embarking on the path of vocational training: “The German economy is very nearly desperately looking for well-trained specialists.” He praised the company's initiative to actively tackle the shortage of skilled workers - and this for 150 years. They have done what sets Koenig & Bauer apart: They looked at a problem and developed a visionary solution,“ said Sasse when addressing the managing board and the company’s forefathers. The success of the past decades shows that the apprenticeship program has been well received by trainees. Koenig & Bauer graduates regularly take the first places in IHK (Chamber of Industry and Commerce) examinations, including best of state and Germany.

In addition to the school’s good facilities and variety of opportunities, the trainees also appreciate the feeling of working at a company steeped in tradition. Koenig & Bauer is a prime example of the development of vocational education and training. “Thanks to its excellent management and committed specialist teachers, the vocational school has constantly reinvented itself in line with state-of-the-art technical developments,” says CEO Claus Bolza-Schünemann.

Today it functions as the “learning factory” of industry 4.0 and unites people and technology. The close connection between theory and practice also enables a lean transition from training to production and assembly - a training model that, according to school principal Reinhard Munz, will continue to exist in the future: “Currently, there is immense need for technically highly qualified specialists to implement new projects in the course of the digital revolution.”