North Kingstown, R.I. – Mr. Akihiro Nikkaku, President and CEO of Toray Industries, Inc., received an honorary Doctor of Business degree from the University of Rhode Island on May 20, 2018. Toray Industries, Inc., in Tokyo, Japan, is the parent company of Toray Plastics (America), Inc., which is headquartered in North Kingstown, Rhode Island. Mr. Nikkaku holds a B.S. in Engineering and an M.S. in Mechanical Engineering from the University of Tokyo. He joined Toray Industries, Inc., in 1973 as an engineer and has served the company as President and CEO since 2010. Mr. Nikkaku also worked at Toray Plastics (America) from 1990 through 1994 in the position of Director of Engineering in the Lumirror® Division.

As President and CEO of Toray Industries, Mr. Nikkaku has been a dedicated driving force behind the company’s efforts to leverage the power of chemistry for addressing global environmental challenges and to pursue business in a socially responsible manner. Toray Industries is committed to a corporate philosophy of contributing to society through the creation of new value with innovative ideas, technologies, and products. The company believes that materials have the ability to change the world fundamentally. As the leader of a corporation engaged in chemicals-related businesses, Mr. Nikkaku has made certain that social responsibility is integrated with Toray’s management philosophy, strategy, and corporate objectives.

In addition, Mr. Nikkaku has implemented processes that guarantee that Corporate Social Responsibility is facilitated throughout Toray’s supply chain, made workplace safety and accident prevention a priority, embraced the empowerment of women, promoted human rights and human resources development, and requires clear communications with all stakeholders. For Mr. Nikkaku, business growth is inseparable from ethical, sustainable business practices.

“We are very pleased to have granted this honorary doctoral degree—the highest accolade bestowed by our University—to Mr. Nikkaku in recognition of his visionary leadership of Toray Industries, Inc., and the extraordinary partnership between URI and Toray Plastics (America), Inc. His steadfast support of so many of our engineering and business students has been essential to their education and career success,” said the University of Rhode Island’s President David M. Dooley.

Dr. Nikkaku expressed his profound appreciation of URI for the honorary doctorate and noted “the strong, long-standing relationship between Toray Plastics (America) and the university.” He added that it was his honor to accept the degree on behalf of all the employees at TPA. Mike Brandmeier, President and CEO, said, “The conferring of the honorary doctorate on Mr. Nikkaku was a very proud moment for all of us at Toray Plastics (America). We have deep respect for Mr. Nikkaku’s leadership and accomplishments and are very grateful for his enthusiastic support of our partnership with URI.”

Brandmeier noted that Toray Plastics (America) has a significant history of supporting URI. Executives serve on various boards and provide academic advisement. In addition, the company has contributed $4.0M to URI, primarily supporting the Toray Plastics of America, Inc., Engineering Fellowship ($1.0M) and the Toray Plastics of America, Inc., Scholarship for undergraduate students ($1.0M). In 2014 Toray pledged $2.0M to the new College of Engineering project. The company also provides internships and sponsors special design projects for students to pursue during their senior year. Forty-six URI graduates are now employed by Toray. 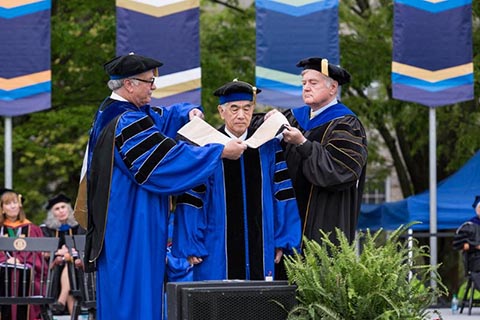