Oosterhout – One of Europe’s largest newspaper printers is readying itself for the future with technology from Q.I. Press Controls and EAE. For the last two years the newspaper industry has been closely following Mediaprint’s Vienna retrofit project. Here, new QIPC quality control systems have been installed, Koenig & Bauer has undertaken an extensive mechanical retrofit and EAE has completely overhauled the control electronics and software architecture. Over 30 newspaper printers from eight different countries were invited to Vienna to take a close look at what is the largest retrofit project that EAE has undertaken to date.

In 2001/2002 Mediaprint installed a total of 13 KBA Commander newspaper presses in three Austrian locations. 16 years on, what was to be done with this kit in a country where newspaper print runs have held up well and where large quantities of printed newspapers will still undoubtedly be circulating in 2025. Mediaprint, the joint print service provider for the publishers of Kronen-Zeitung and Kurier (combined print run of just under 950,000 copies), decided on a comprehensive retrofit.

All 39 press towers have already been fitted with Q.I. Press Controls’ current IDS-3D closed loop density control. The existing ABB controls and the ABB planning system are being replaced with EAE control components and the VIP Dispo/Mail/Statistic and Print Image software packages. In addition, the Austrian printing plant is the first user of the new EAE Desk 7 control desk. Three of the eight presses at the Vienna-Inzersdorf site have now been fully upgraded and the customer is in a position to talk about its initial experiences.

Attendees at the open house were treated to an in-depth presentation of how the EAE software modules work through a mix of talks and live production. These modules have replaced software that was partly developed in-house by Mediaprint. Bernhard Schmiedeberg, Senior Vice President Sales at EAE, highlighted in particular how the control architecture has been simplified, so that each press tower now only needs one PLC instead of 11.

The EAE part of the project got underway in February 2017 and the conversion of the 13 web presses should be complete by May of next year. Progress has been helped by the fact that one of the eight Mediaprint presses in Vienna could be taken out of production for ten weeks. This also allowed all the engineers to be trained on the project, so that it should be possible to fully convert the last two lines in Salzburg within the space of two weeks.

For all those involved, the Mediaprint retrofit is an important showcase. It demonstrates the smooth way in which Koenig & Bauer, Q.I. Press Controls and EAE have been able to work together, it shows off the Desk 7 operating under production conditions and it confirms the potential for savings, which, in the case of Mediaprint, run into the tens of million euros. It was not just representatives of companies like Axel Springer, Funke, News Printers or CPP who took advantage of the opportunity to talk to Mediaprint’s staff. QIPC and EAE Chairman Menno Jansen together with EAE Managing Director Jörg Westphal were also in Vienna to hear from users of the Desk 7 and the VIP software.

Menno Jansen sees the current version of the new control desk as just a first step. In his talk at the open house he did not simply cover the latest QIPC developments such as the reduction in ink use through smart dampening control. Above all, he focused on the control desk of the future. In future, the central, high res 4k screen of the Desk 7 will display a dashboard that provides at-a-glance information about press status through color signals and smart graphics.

For QIPC-EAE this future is only a few months away. These functions will become a reality on the control desk in a retrofit project underway in Amsterdam. De Persgroep, the Dutch customer, will not only cut the number of control desks per press from three to two, as at Mediaprint, but it also aims to control two press lines from a single Desk 7. 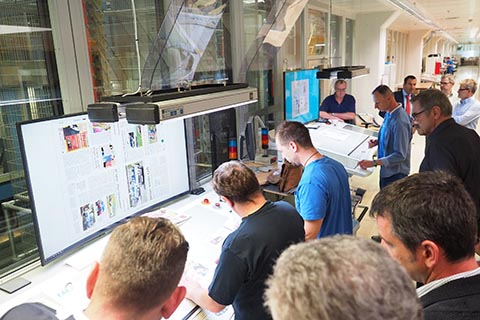