swissQprint, the Swiss developer of digital large-format printers, has shipped its 1000th unit – another milestone in the history of the company that celebrated its tenth anniversary last year.

A Nyala-series UV inkjet printer left the swissQprint factory in Kriessern on 11 May 2018, marking the 1000th printer that the Swiss company has delivered in around a decade. The current range comprises three models with different print bed sizes and productivity levels: Nyala (3.2×2 m print bed, 206 m2/h max. output), Impala (2.5×2 m print bed, 180 m2/h max. output) and Oryx (2.5×2 m print bed, 65 m2/h max. output). Nyala, the largest and highest-performing model, is the most sought-after in the range and also leads the rest of the European industry: it has been Europe's best-selling printer model in its class for the past three years.

Headquartered in Switzerland, active worldwide
The three engineers who founded swissQprint in 2007 are still active in business operations. At its headquarters in Switzerland, the company currently employs 86 people responsible for development, production, central administration and marketing. An additional 34 people work at subsidiaries in the USA, Japan and Germany. These act as sales and service companies, just like the 30 independent specialist partners in the swissQprint distribution network that covers 40 countries around the globe.

The 1000th printer is going to a print services provider in northern France who will be using Nyala LED to refine and expand an already wide offering. swissQprint large-format printers are known for their precision and versatility, so Nyala LED makes a perfect match with its new owner's vision. 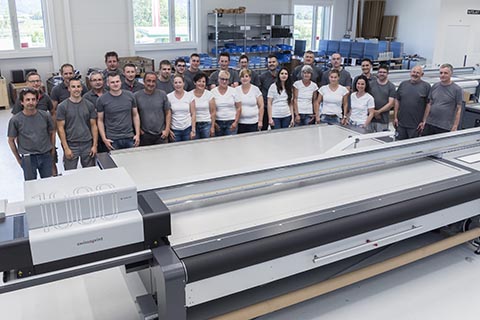